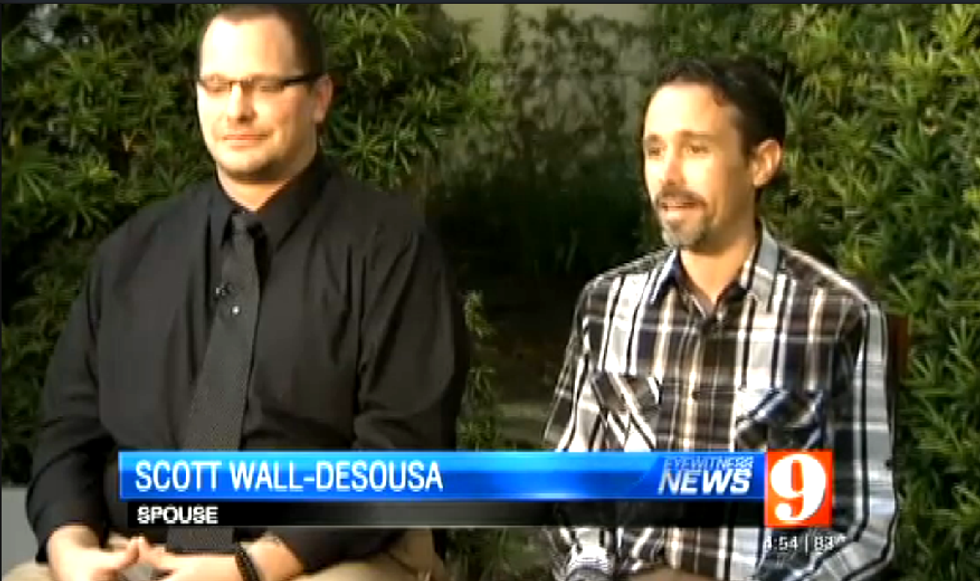 A married same-sex couple in Brevard County, Florida who were featured on a TV news segment have received a letter from the state Department of Motor Vehicles ordering them to change their names back on their driver's licenses or risk having those licenses revoked.

According to Zack Ford at Think Progress, the two men received the warning letter after they were featured in a TV news segment announcing their status as one of the first same-sex couples in the state to legally adopt their wedded name.

Same-sex marriage is still not recognized by Florida's state government, but Scott and Daniel Wall-Desousa got married in New York City and used their out-of-state marriage license to have their names legally changed on all of their official documents, a practice that is perfectly legal for heterosexual couples.

Within days of the segment about the Wall-Desousas airing on WFTV Channel 9, the two men received a letter from the Florida DMV ordering them to have the name change undone on their driver's licenses or lose them.

Daniel Wall-Desousa told Channel 9 that the letter "informs me and notifies me that my driving privileges will be canceled indefinitely as of Nov. 22."

If they comply with the request, he said, then their licenses will have a different name than all of the rest of their documents.

"Everything has been changed to my benefits, to my Florida pension," he explained, adding that even the men's voter IDs and work badges display their married name. "How does one undo all that?"

Daniel and his husband Scott plan to file a lawsuit against the state, calling the policy backwards and discriminatory.

Scott Wall-Desousa said that the state of Florida didn't seem to care about the state of their official documents until they went public, amounting to a situation he compared to the military's now-revoked "Don't Ask, Don't Tell" policy regarding LGBT service members.

Watch the video segment that ignited the controversy, embedded below via WFTV: