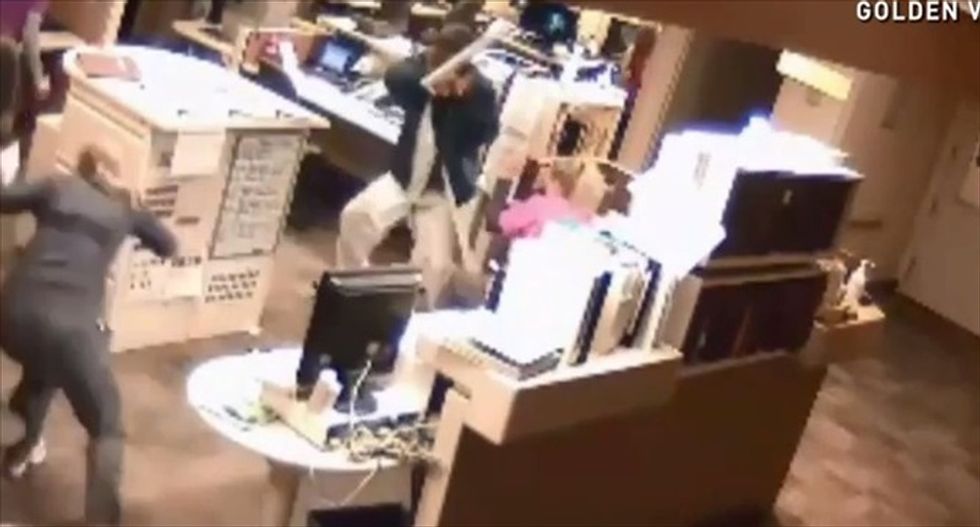 Authorities in Maplewood, Minnesota released footage of a 68-year-old man chasing and attacking several nurses at a local hospital shortly before he died in police custody, KARE-TV reported.

The video, taken from security cameras at St. John's Hospital, shows Charles Emmett Logan running into the nurse's station and swinging at several nurses with a metal bar on Nov. 2. The footage also shows him chasing nurses into a nearby hallway, then stopping to hit a nurse who fell down while trying to escape. Four nurses were injured, including one who suffered a collapsed lung and another who broke a wrist. Logan then left the hospital while carrying the pole.

According to the Minneapolis Star-Tribune, Logan had been admitted to the hospital a few days earlier for signs of "confusion." He reportedly had a disagreement with his wife and daughter over his treatment.

A police report said that a nursing supervisor determined that Logan was "able to make his own decisions" despite the dispute, which he described as "significant family dynamics."

Logan's attorney, Shane Perry, said that his client told him he wanted to get a separation from his wife, as well as sell his house and give half of the money to his grandchildren. Logan also reportedly asked Perry to help him obtain a protective order against his wife, but District Judge Salvador Rosas refused to meet with Logan, and told Perry to submit his request "at the appropriate time."

Officials said that around 2 a.m. on Sunday, Logan grabbed the metal bar from a nursing station and began his attack.

"There's nursing staff talking to each other, and all of a sudden he comes charging into view with this large, long pole and starts wildly swinging at the staff," Police Chief Paul Schnell said. "They start running. He runs after them. As they're running he is, with significant force, wildly swinging this pole at these nurses. You see several of them get struck, multiple times."

Shnell said officers from his department and Ramsey County sheriff's deputies caught up to Logan three blocks away from the hospital and failed in an attempt to Taze him before wrestling him to the ground and handcuffing him. However, Logan then "went limp" and could not be revived. He died after being taken back to St. John's.

The state Bureau of Criminal Apprehension has taken over the investigation into Logan's death. A toxicology report is expected to be delivered in "a few weeks."

Watch KARE's report on Logan's death, as aired earlier this week, below.