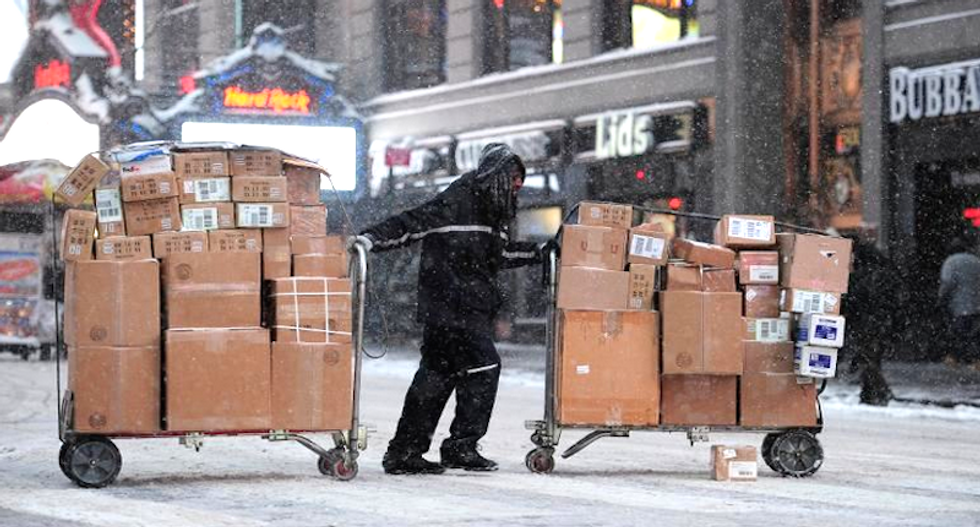 Even in a city famous for blizzards that roar off Lake Erie shared with Canada, this one stunned Buffalo locals. It even featured the unusual phenomenon of "thundersnow" -- in which snow falls instead of rain during a storm. Another forecaster said he was at a loss of words to describe it.

Many areas south of Buffalo, which is near Niagara Falls, were socked with up to 1.8 meters (six feet) in less than 24 hours. The snowfall was expected to continue.

"Some parts of our county are going to receive a year's worth of snowfall in three days," Erie county executive Mark Poloncarz told local media.

He added that three people died from apparent heart attacks while shoveling snow, and another while pushing a trapped car.

The blizzard was weirdly localized.

While 1.5 meters (60 inches) of snow was reported at a site just southeast of the town of Lancaster, only 10 kilometers to the northwest just 10 centimeters fell at Buffalo Niagara International Airport, the Buffalo News newspaper said.

There's no meteorological term for the phenomenon that generated a wall of clouds and churned out such a stunning amount of snow, said Dave Zaff of the National Weather Service in Buffalo, the paper said.

"Whiteout to blue sky in a very, very short distance," he said.

A women's university basketball team spent more than 24 hours trapped in a bus on a highway because of the snow, before being rescued.

"We've been sitting here so long that we're completely snowed in. There's four feet of snow around the bus.

"We're running low on water so we've been taking cups and putting snow in them and letting them melt," said head coach Kendra Faustin of Niagara University told the radio station WKBW.

They were finally rescued around 4 am (0900 GMT) Wednesday, the radio station said.

A driving ban was put into effect.

Local media reported at least one person was trapped after a roof collapsed into a home.

Highway crews were in a dilemma; snow plows generally cannot operate effectively with snowfalls over one meter.

Some first responders carried gurneys down snowed-in streets because ambulances could not get through.

Other paramedics used snowmobiles on rescue calls, since the streets were impassible.

The National Guard has been called out to assist, Governor Andrew Cuomo said.