Fourth victim of US school shooting in Washington state dies 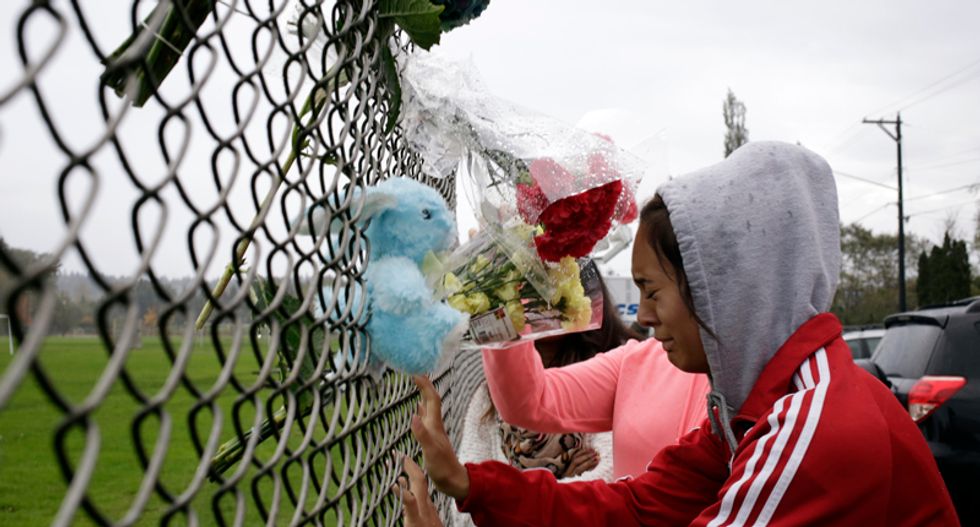 Student Tyanna Davis cries after placing flowers on a fence outside Marysville-Pilchuck High School the day after a shooting at the school in Marysville, Washington October 25, 2014. REUTERS/Jason Redmond

A fourth teen victim died, two weeks after being gunned down by a fellow high school student who went on a shooting rampage in Washington state, hospital officials said.

The three other victims were all girls, one of whom died on the spot and two of whom died in hospital over the past two weeks.

The teen widely identified as the shooter, Jaylen Fryberg -- reportedly a cousin of Andrew Fryberg -- also turned the gun on himself during the spree.

In a brief statement Andrew Fryberg's family expressed gratitude "for the amazing support from the community, as well as from everyone around the world."

"Our family is overwhelmed with the love and care that has been provided to our loved one during this time and you all will forever hold a special place in our hearts," they said.

All three of the teens who were brought to hospital in critical condition, each of whom had been shot in the head, are now dead.

Another boy, who was shot in the jaw and arrived in serious condition, was released from hospital Thursday, US media reported.

Police are attempting to ascertain a motive for the incident at Marysville-Pilchuck High School in Marysville, north of Seattle.

Jaylen Fryberg had left a series of tortured posts on Twitter, suggesting he was used to handling guns, and hinting that a failed romance may have led to the shooting.

Local media said Jaylen Fryberg, a Native American, played on the school football team and had been named a homecoming prince just a week before.