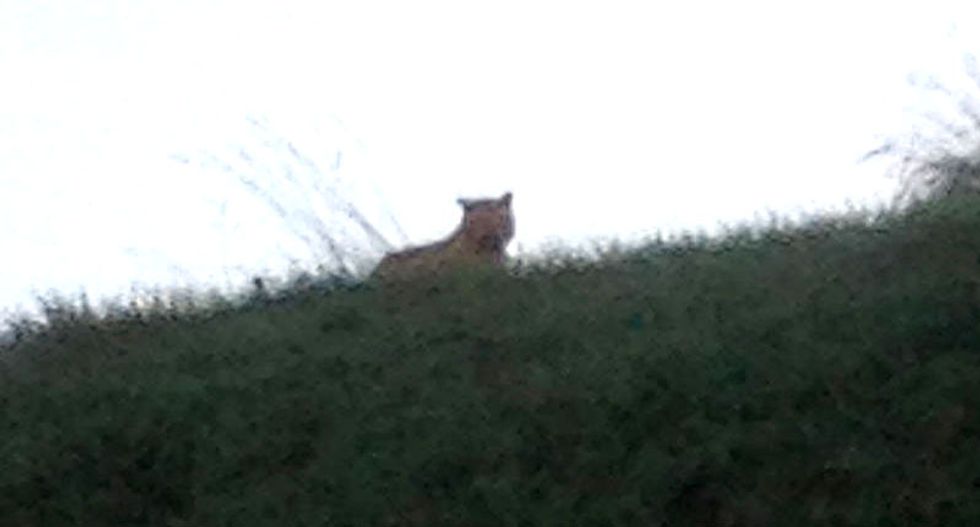 A picture taken by a passerby shows a tiger on the loose walking in Montevrain, east of Paris, on November 13, 2014 (AFP Photo/Julie Berdeuax)

Police and firefighters were desperately hunting for a tiger on the loose near Paris Thursday after a local resident spotted the fearsome animal in a car park and sounded the alert, authorities said.

Backed up by a helicopter overhead, firefighters armed with tranquilising guns combed the area in the Seine-et-Marne district near the French capital.

Authorities ordered residents to stay indoors and children were kept at school, as several people came forward saying they had seen the tiger on the prowl.

"We have been running after it since this morning, police officers are trying to intercept it," a police source said.

Town hall official Cedric Tartaud-Gineste told AFP: "We are calling on residents to be careful, not to leave their homes and to stay in their vehicles."

"Anyone who sees the tiger should call the police or the fire service," he added.

He said that a security cordon covering an area about the size of four or five football pitches had been set up around a wooded area near the small town of Montevrain, some 40 kilometres (25 miles) east of Paris.

Around 60 firefighters and police officers have been deployed in the search, as well as a dog trained in tracking bears and large game.

Police are also using thermal cameras in a bid to find the tiger, which is estimated to weigh in at 70 kilogrammes (155 pounds), according to the town's mayor Christian Robache.

A woman spotted the animal in a supermarket car park in Montevrain on Thursday morning.

"My wife saw it this morning," Jean-Baptiste Berdeaux, who manages the Intermarche supermarket, told AFP.

"She didn't get out of the car and called me to say 'I think I saw a lynx'," he said, adding she took a photo of the animal and the couple then alerted nearby police officers.

Some people playing tennis nearby also saw the animal sloping by.

An AFP reporter on the scene saw a dozen or so fire engines and police vehicles lined up near the supermarket.

Authorities said they were hoping to catch the animal alive.

"If it's possible, we'll try and put it to sleep. If it becomes dangerous or aggressive, the order will be given to kill it," police said.

It is as yet unclear where the tiger comes from.

The town of Montevrain is a stone's throw away from Disneyland Paris but a source close to the investigation said there was no link to the theme park.

Authorities have also made enquiries at a big-cat wildlife park 30 kilometres away.

Suspicion initially fell on a circus that had set up its tent at the supermarket car park a few days ago, but the mayor said it "did not have a tiger."

The PETA animal rights group called on authorities to "show restraint and compassion in dealing with this tiger on the loose."

"This situation, however upsetting, is entirely preventable and should serve as a wake-up call to the public about the perils of keeping wild animals in captivity," the group told AFP in a statement.

Brooklyn Center Police Chief Tim Gannon asserted on Monday that an officer who shot and killed 20-year-old Daunte Wright had done so accidentally.

At a press conference, Gannon presented video of the killing, noting that the officer had verbally indicated that a Taser would be deployed instead of a firearm.