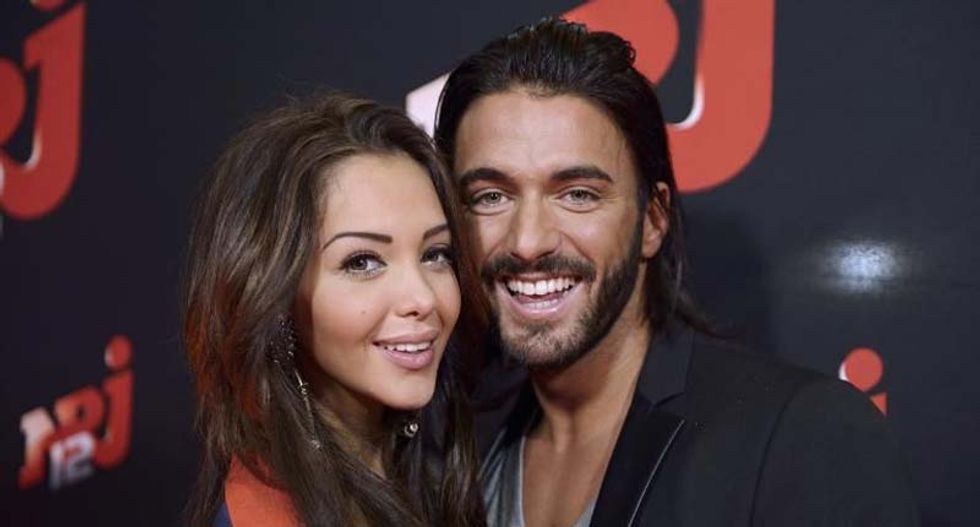 French TV hosts Nabilla Benattia and her boyfriend Thomas Vergara pose during the presentation of their new NRJ12 TV show on October 21, 2013 in Paris (AFP)

A French reality TV star who gained fame and mockery over her trademark "hello? I mean hello" expression has been placed under investigation for attempted murder after her boyfriend was stabbed, prosecutors said Saturday.

Prosecutors said Nabilla Benattia, detained on Friday, was being probed for "attempted voluntary homicide" after her boyfriend was found stabbed in the chest at a hotel in Boulogne-Billancourt near Paris.

Another investigation was also opened over a separate alleged armed assault in August in which her boyfriend, Thomas Vergara, was wounded in the back.

Benattia was to be presented to a judge later Saturday and prosecutors planned to ask that she be held in custody. A group of young people waited outside the court in Nanterre to get a glimpse of the reality TV star.

Benattia, who denies any wrongdoing, rose to fame last year when she uttered "hello? I mean hello" in horror after learning that fellow female contestants had not brought shampoo with them on a show.

Firemen were called to a hotel in Boulogne-Billancourt near Paris in the early hours of Friday after the 22-year-old, who has now become a television commentator known by her first name Nabilla, apparently had a fight with Vergara, whom she met on reality TV.

Vergara had several knife wounds in the chest and his situation was considered serious though not life-threatening.

According to her initial statement, the couple was assaulted by three people and Vergara was injured when he tried to stop them, another police source said.

However, under subsequent questioning, Nabilla told investigators Vergara had taken cocaine and accidentally stabbed himself during a violent dispute with her.

Nabilla's famous expression spawned countless parodies, including one video where she calls a visibly irate Hitler, and inspired several ad campaigns, prompting the curvaceous brunette to have it registered as a trademark.

She had been taking part in the fifth instalment of "The Angels of Reality TV" -- a show that groups together candidates and stars of other, previous reality TV shows -- when she uttered those words.

Of Algerian and Italian origin and carrying French and Swiss nationality, she started appearing in reality shows in 2011.

She went on to front her own reality show called "Hello Nabilla" about her and her family, much like her idol Kim Kardashian.

She has also modelled for Jean-Paul Gaultier, published a book and appeared in the French Vanity Fair.

Benattia is known for losing her temper as well. In May 2013, for instance, she spat in the face of a train conductor, who filed a complaint against her.