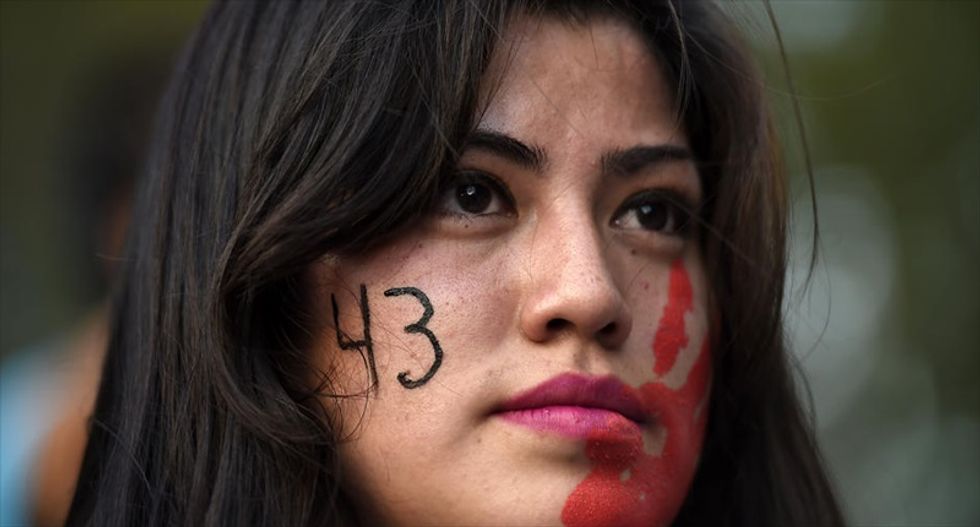 Thousands of protesters marched in Mexico City on Wednesday to demand the safe return of 43 students missing since last month after authorities arrested the main suspects in the disappearance.

Demonstrators chanted "they took them alive, we want them alive" and held a large banner with images of the 43 college students, whose disappearance has drawn international outrage and turned into a full-blown crisis for President Enrique Pena Nieto.

After a month on the lam, Jose Luis Abarca, the former mayor of the southern city of Iguala, and his wife Maria de Los Angeles Pineda were arrested in a gritty neighborhood of Mexico City on Tuesday.

Their capture raised hopes that they could offer solid clues about the students' whereabouts almost six weeks after they were attacked by Iguala police officers linked to the Guerreros Unidos gang.

The night of terror left six people dead and the 43 students missing.

Prosecutors accuse the mayoral couple of colluding with the gang and ordering the attack over fears the students would disrupt a speech by Pineda, who was head of the local child protection agency.

But protesters, who were joined by the parents of the missing, said the arrest was not enough.

"The anger over the disappearance of the 43 students has not gone away with Abarca's arrest," said Bardomiano Martinez, deputy director of their teacher-training college in Guerrero state known as a bastion of left-wing radicalism.

"This is what we want to show the government with this march. We will mobilize until they are back, alive," he said.

The investigation has led authorities to a dozen mass graves containing 38 bodies, raising fears of a tragic end to the mystery.

Officials say preliminary DNA analyses have shown that at least 28 of them are not the students, but independent Argentine forensic experts will give the final word.

Despite the gruesome discoveries, parents of the missing and some officials harbor slim hopes, with Guerrero's interim governor saying the abductors are possibly moving them around to elude the search.

Thousands of security forces backed by drones and boats have been combing towns, mountains and rivers around Iguala, 200 kilometers (125 miles) south of Mexico City.

"The capture of Abarca makes us believe that the biggest piece of the puzzle can shed more light on some of the scenarios that we have been building," Guerrero interim Governor Rogelio Ortega told the Televisa network.

Ortega said witnesses have told graduates of the students' teacher-training college that the 43 were taken near the town of Teloloapan, west of Iguala, and then Cuetzala before being split into two or more groups.

"These are clues, comments that feed hope and faith," said Ortega, whose predecessor Angel Aguirre resigned last month amid violent protests over his handling of the case.

He stressed, however, that there is "uncertainty" over whether they are alive.

Alejandro Hope, a security expert and former intelligence officer, said the most likely scenario is that the students were killed.

"Why would they hold 43 people for 40 days without asking for a ransom? It makes no sense," he told AFP.

Saying the students may be alive is an attempt by Ortega to "manage the conflict" and "wait for the social protests to calm down," Hope said.

Last year, 13 young people who were snatched from a Mexico City bar were found dead in a mass grave three months later.

Last week, the bodies of three American siblings and a Mexican man were found two weeks after they disappeared in the northern state of Tamaulipas.

In the case of the 43 students, authorities have detained 59 people, including Guerreros Unidos members and 36 police officers from Iguala and the neighboring town of Cocula.

Prosecutors say Iguala's police handed the students to Cocula colleagues, who in turn delivered them to the Guerreros Unidos.

After that the trail went cold.