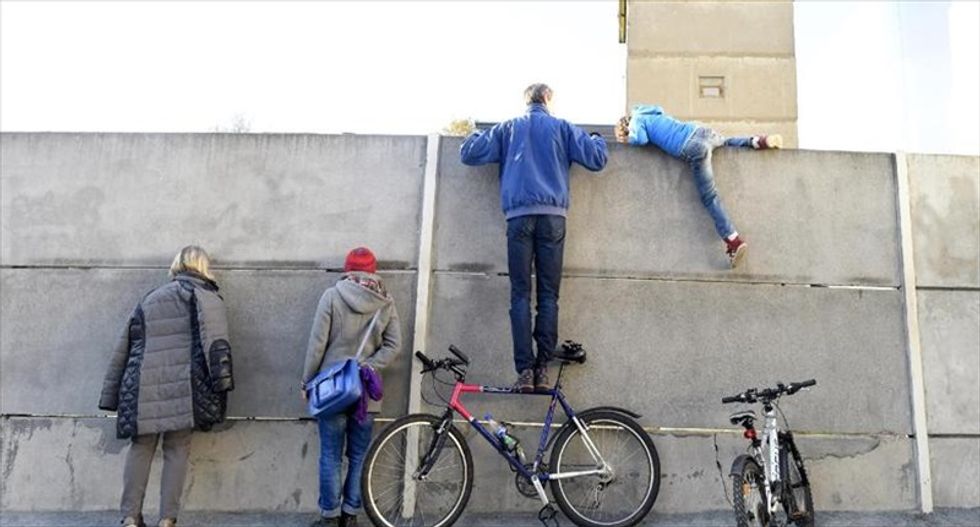 People climb remains of the Berlin Wall at the Bernauer Street memorial site in Berlin on Nov. 8, 2014. Photo by Tobias Schwarz for Agence France-Presse.

Germany marks 25 years since the euphoric fall of the Berlin Wall Sunday with more than a million people expected to join tributes, festivities and an open-air party with freedom icons and rock stars.

Chancellor Angela Merkel leads commemorations for those killed trying to flee communist East Germany, ahead of a giant festival to celebrate the peaceful revolution that ended Europe's Cold War division on November 9, 1989.

Merkel, 60, who grew up under the repressive eastern regime, said in her weekly podcast Saturday that the reunified capital of Berlin had become "almost a symbol of Europe's unification after the Cold War".

"This city has written history," she said later at an event held at Berlin's modern art museum, the Neue Nationalgalerie. "The human urge for freedom cannot be subdued in the long run."

A highlight is expected to be the symbolic release of nearly 7,000 illuminated white balloons, pegged along a 15-kilometre (nine-mile) stretch of the Wall's former 155-kilometre path, around 1820 GMT.

The glowing orbs will begin floating into the night sky from the iconic Brandenburg Gate, the symbol of German unity, to the stirring strains of Beethoven's "Ode to Joy", the anthem of the European Union.

It is due to be watched by Merkel, the last Soviet leader, Mikhail Gorbachev, 83, former Polish president and freedom icon Lech Walesa, 71, as well as German head of state Joachim Gauck, 74, a former pastor and rights activist in the East, and Hungarian ex-premier Miklos Nemeth, 66.

Gorbachev warned Saturday that the world was on the "brink of a new Cold War", amid tensions between the West and Russia over Ukraine.

He complained of a "breakdown of trust" in recent months, adding: "Let us remember that there can be no security in Europe without German-Russian partnership."

Unlike events for the 20th anniversary, no visiting heads of state or government are due, with the organisation this time more grassroots.

Entertainment will range from the Berlin State Orchestra under the baton of Daniel Barenboim to a fireworks display and performances by East German rock band Silly and techno musician Paul Kalkbrenner.

British singer-songwriter Peter Gabriel will perform the Wall anthem "Heroes", which David Bowie recorded when he lived in then West Berlin.

More than a million visitors from Germany and abroad are expected to descend on Berlin over the weekend, tourism group Visit Berlin said.

Many people have gathered at historic points along the Wall since Friday, watching video images of the "we are the people!" protests in 1989, admiring the balloon art installation or posing for photos in front of remnants of the Wall.

Others paused to read information boards about the grim reality of life during Berlin's 28-year division.

At Potsdamer Platz, once spliced in two by the detested Berlin Wall, student Florian Baschin, born the year after Germany's reunification on October 3, 1990, said imagining life behind a closed border was an "oppressive feeling".

Former easterner Ronny Kraft, 34, told AFP that the commemorations were of "great importance" for him because "the fall of the Wall marked my personal history".

At the Bornholmer Strasse border crossing where an East German guard made the snap decision on the night of November 9, 1989 to open the barrier, an elderly woman was reduced to tears, while parents explained to young children about the Wall.

Harald Jaeger, the guard who, overwhelmed by large crowds, finally gave the order to open the barrier in 1989, told AFP last week that he planned to attend Sunday's events.

Merkel on Sunday will also open a major exhibition on Bernauer Strasse, a street divided by the Wall that saw harrowing scenes of families and neighbours ripped apart when the Wall went up overnight.

The East German authorities built the Wall, which they called an "Anti-Fascist Protection Rampart", in August 1961 to halt a mass exodus to the West.

At least 389 people lost their lives trying to escape communist East Germany, according to an official toll, although victims groups put the figure much higher.