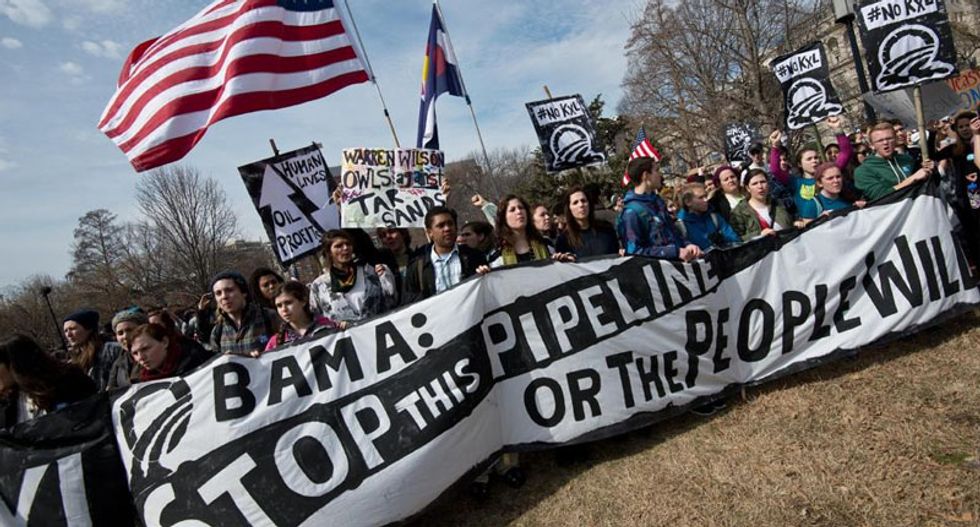 Obama's administration for years has held up approval of the $5.3-billion Keystone pipeline that would transport Canadian tar-sands oil to US refineries, citing the potential environmental impact (AFP Photo/Nicholas Kamm)

The Republican-led U.S. House of Representatives approved the Keystone XL pipeline on Friday, but a similar measure struggled to get enough support in the Senate and President Barack Obama indicated he might use his veto if the bill does get through Congress.

The legislation, approved by 252 votes to 161, circumvents the need for approval of TransCanada Corp's $8 billion project by the Obama administration, which has been considering it for more than six years.

House lawmakers were confident the Senate would follow suit and pass its version of the bill.

The bill's sponsor, Republican Representative Bill Cassidy from Louisiana, said before the vote the House would make it "as easy as possible for the Senate to finally get a bill to the president's desk that approves this long-overdue Keystone XL pipeline."

Approval for the pipeline, which would help transport oil from Canada's oil sands to the U.S. Gulf coast energy hub, has rested with the administration as it crosses an international border.

The decision has been pending amid jousting between proponents of the pipeline who say it would create thousands of construction jobs and environmentalists who say it would increase carbon emissions linked to climate change.

Passage of the companion bill was not assured in the Senate, which is expected to take up the measure next Tuesday. Supporters were still one vote shy of the 60 needed to overcome a filibuster, a blocking procedure, an aide to a Keystone supporter said on Friday. The aide spoke on condition of anonymity.

Speaking at a news conference in Myanmar on Friday, Obama said his position on the 800,000 barrels per day pipeline had not changed.

Obama, who has raised doubts about how many jobs the pipeline would create and said he does not want to interfere with the State Department review of the issue, cited pending legal action in Nebraska and said it was hard to evaluate the pipeline proposal until the actual route was known.

The White House has not made clear whether Obama would use his veto to block the legislation currently before Congress, but he has threatened to use that power in the past.

The congressional bills have highlighted both the importance of the pipeline to Louisiana, whose economy is heavily oil-dependent, and the fact that Obama cannot count on full support from members of his Democratic Party on some issues.

Democratic Senator Mary Landrieu, the head of her chamber's energy committee, is co-sponsoring the Keystone bill in the Senate with Republican John Hoeven of North Dakota. She is battling to retain her Senate seat in a runoff election against Cassidy on Dec. 6, after last week's midterm elections.