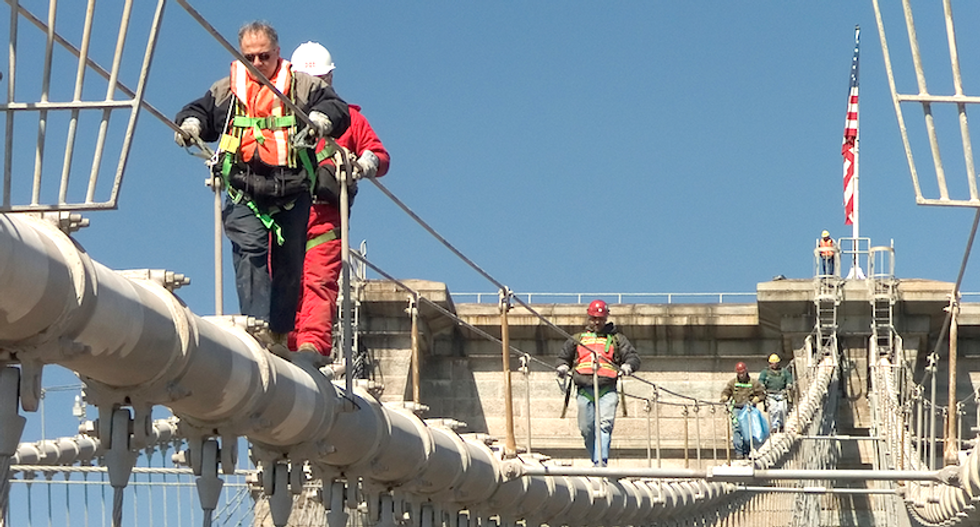 There are about 600,000 bridges in the United States, and about one in four is classified as functionally obsolete or structurally deficient. This doesn’t mean they’re in danger of imminent collapse; they may be simply too narrow or built for lighter traffic than today’s standards. Bridges that can’t support heavy trucks have weight restrictions posted.

There are plenty of repairs that need to be done. But drivers groan when individual bridges are finally slated for reconstruction since these repair projects – along with accompanying traffic snarls – can seem interminable.

Who writes the checks?

The federal government pays much of the costs to repair and replace highway bridges, but it is up to the individual states to prioritize the work. Under current practice, the federal money comes principally from taxes on fuel – 18.4 cents per gallon on gasoline and 24.4 cents per gallon on diesel. The revenue goes into the Highway Trust Fund. However, because motor vehicles have become more fuel efficient and people tend to be driving less, the trust fund has been woefully underfunded in recent years. Last summer, Congress passed a stopgap measure to supplement the trust fund through May 2015. In the upcoming Congress, there’s likely to be considerable discussion about a more permanent fix. 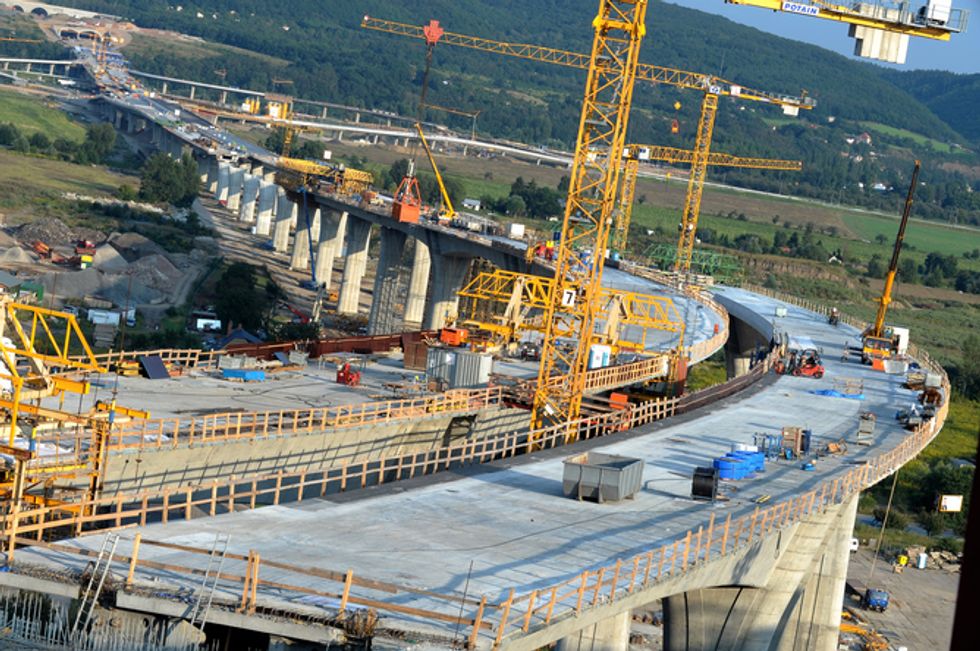 Hopefully not a bridge to nowhere.

The slow process of building a bridge

The traditional way a bridge has been built in America is for a state department of transportation to design the structure — either totally in-house or with the help of a consulting firm — and then issue a request for proposals from qualified construction companies. If not required to accept the lowest bid, the state may take into account such non-fiscal factors as past performance of the bidder, time to completion of the project and aesthetics. Only after a contract has been signed can construction begin.

This serial process takes time and delays can occur for a variety of reasons. Complications or contradictions in the design may arise, which can halt construction and require a return to the drawing board. When changes are necessary, disagreements can arise over who – the state or the contractor — should be held financially responsible. This can lead to legal challenges. Sometimes a contractor goes bankrupt in the middle of a job. Even when there are no technical or fiscal complications, environmentalists and other interest groups may call for a halt to work, which can also lead to further delays. Then there is the weather, which can cause delays in a construction project not otherwise challenged.

A well-crafted construction project will include monetary penalties on the contractor for not meeting deadlines. These can amount to tens of thousands of dollars for every day that the new bridge is not opened to traffic. On the other hand, if the bridge is finished ahead of schedule, the contractor will typically receive a bonus. 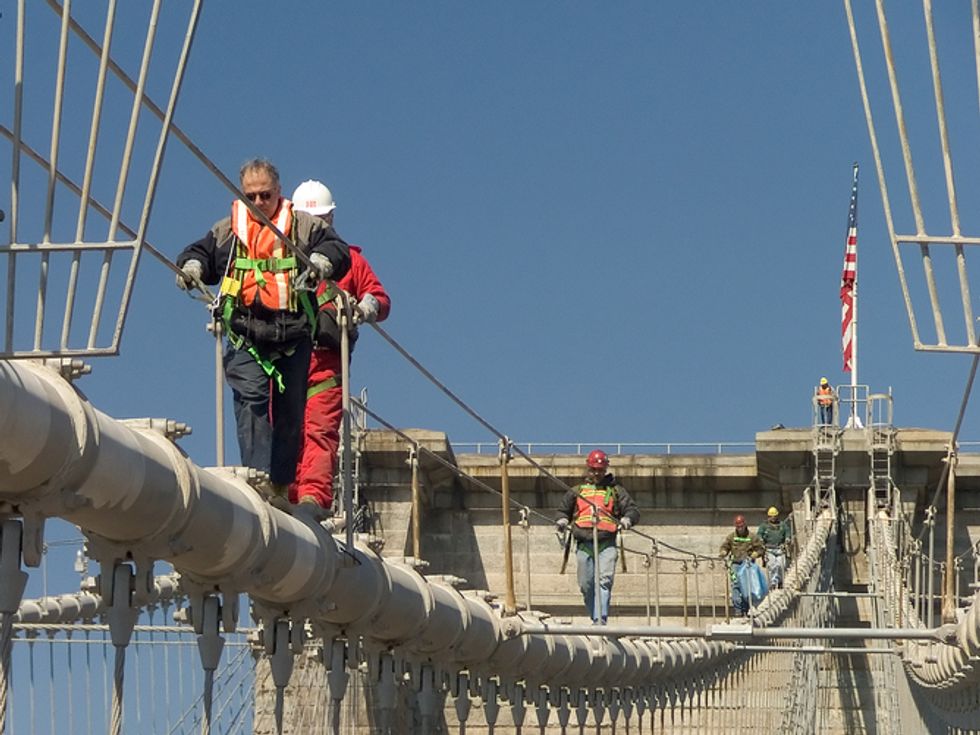 Getting a bridge project completed can be like walking a tightrope.

Newer ways to get bridges built

Increasingly in recent years, especially where large construction projects are involved, state departments of transportation have preferred to enter into so-called design-build contracts. In this case, a single company is engaged to do the design and carry out the construction of a bridge. This arrangement involves design and construction teams working together from the start. Any complications and contradictions are likely to be resolved internally and quickly so that the project can proceed with minimum delay. New York’s nearly US$4 billion Tappan Zee Bridge replacement project, currently the largest bridge project underway in the US, is a design-build project.

With government funding for infrastructure projects being so tight, an alternative has arisen in what are called public-private partnerships, often abbreviated PPP or P3. In this arrangement, private investors assume the responsibility for financing and building a bridge or highway, and the investors are granted the right to collect tolls for what may be decades. The investors naturally believe they will realize a good return on their investment, even after they pay the public partner a sizable sum upfront for the concession. This upfront payment can be in the billions of dollars, which can be very tempting for a state or municipality struggling to balance its budget.

Pennsylvania recently entered into a public-private partnership to finance, design, build and maintain over the course of 25 years 558 of the state’s bridges in need of repair or replacement. Although the state could do this kind of work itself, it would be limited in how much money it could spend annually. The private consortium will produce generic designs and order common structural components in quantity, something the state could not do within its annual budget. What would have taken the Pennsylvania department of transportation eight to 12 years to do under its normal procedures will be accomplished in just three.

Pennsylvania’s bridge replacement program was modeled after a Missouri initiative that repaired or replaced over 800 bridges in just three-and-a-half years, at a cost of $685 million. One of the features that made the project succeed was allowing the contractor to close a road and detour traffic rather than realign it where work was being done on a bridge. This not only saved the contractor the time and money it takes to divert traffic lanes but also provided a better environment for the construction workers, who could do their job more safely and quickly. Had the state transportation department been doing the work, voter and other political pressures would likely have argued against closing a road to work on a bridge.

Creative financing and contract arrangements like these are being implemented to repair and replace aging bridges more economically, quickly, and safely. We can expect to see more such sensible infrastructure work in the future.

Henry Petroski does not work for, consult to, own shares in or receive funding from any company or organisation that would benefit from this article, and has no relevant affiliations.