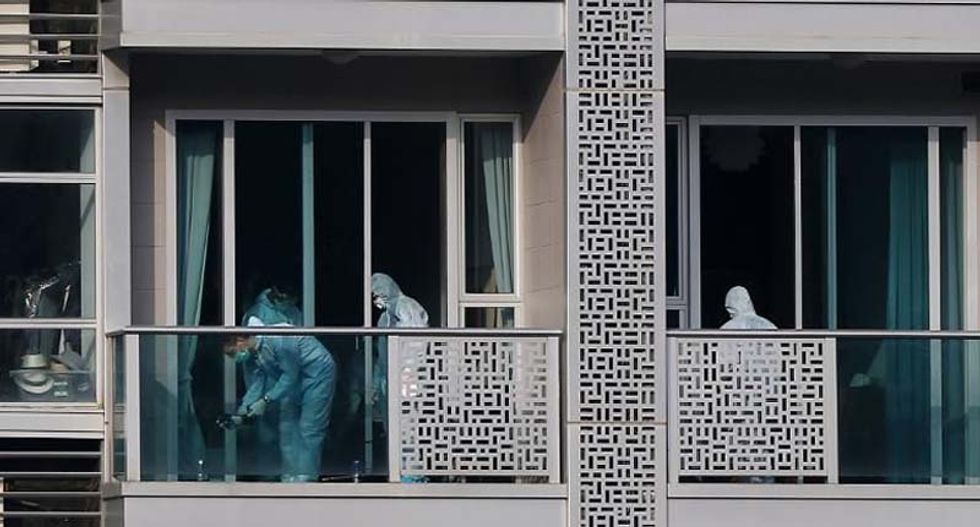 Police officers investigate in a flat at J Residence after grisly discovery of two female corpses, including one in a suitcase, in Wanchai district of Hong Kong, on November 1, 2014 (AFP)

A British banker will appear in a Hong Kong court Monday to face murder charges after the grim discovery of two women's bodies, including one in a suitcase, in his upmarket apartment, police said.

Investigators said a holding charge of two counts of murder had been laid against the 29-year-old man, who worked for Bank of America Merrill Lynch as a securities trader and was identified in local media as British expatriate Rurik Jutting.

He was arrested after calling police to his flat on the 31st floor of the residential block in the popular expatriate district of Wanchai in the early hours of Saturday morning.

Investigators found a naked woman with knife wounds to her neck and buttock in the living room of the flat.

The corpse of the other woman was discovered decaying inside a suitcase on the balcony.

The woman found in the living room, described by police as a foreigner aged between 25 and 30, was declared dead at the scene, with the cause thought to be a cut to her throat.

Police were scouring thousands of photographs stored on a mobile phone seized from the suspect, including some showing one of the corpses wrapped in a carpet inside a suitcase on the balcony, the South China Morning Post reported.

On social network platform LinkedIn, Rurik Jutting is listed as a graduate of Cambridge University.

"A person with that name previously worked at this firm," Bank of America Merrill Lynch spokesman Paul Scanlon told AFP.

A person by the name posted on social media last week he was embarking on a "new journey".

"Stepping down from the ledge. Burden lifted; new journey begins. Scared and anxious but also excited. The first step is always the hardest," said the posting uploaded to Facebook on Monday.

The victims are believed by police to be sex workers of Southeast Asian origin, local reports said.

One of the victims was thought to be a 25-year-old Indonesian, the government in Jakarta said, adding that its consulate in Hong Kong was coordinating with police to identify her.

Officers said earlier maggots were found in the corpse hidden in a suitcase.

"From what we can see it was intentionally hidden because it was put in a travel suitcase," police assistant district commander Wan Siu-hung told reporters.

"This body belonged to a person who has passed away for quite some time."

A resident said a "disgusting" smell had been emanating from the building.

"It was the smell of a dead body. Maybe the police were moving it," the man, who lived on the 11th floor and refused to give his name, told AFP on Sunday.

Britain's Foreign Office confirmed that a British national had been arrested in the southern Chinese city.

"We are in touch with the local police and stand ready to provide consular assistance," it said.

Hong Kong, a city of seven million, has low crime rates and only 14 cases of homicide were reported in the first half of the year.

But in recent years the public was gripped by a lurid case dubbed the "Milkshake Murder" in which American housewife Nancy Kissel killed her banker husband.

Kissel, now serving a life sentence, was convicted of drugging her husband -- a senior executive at Merrill Lynch -- with a sedative-laced strawberry drink before clubbing him to death with a lead ornament at their luxury home in 2003.