In rare case, NYC cops charged with assault over pistol-whipping of teen 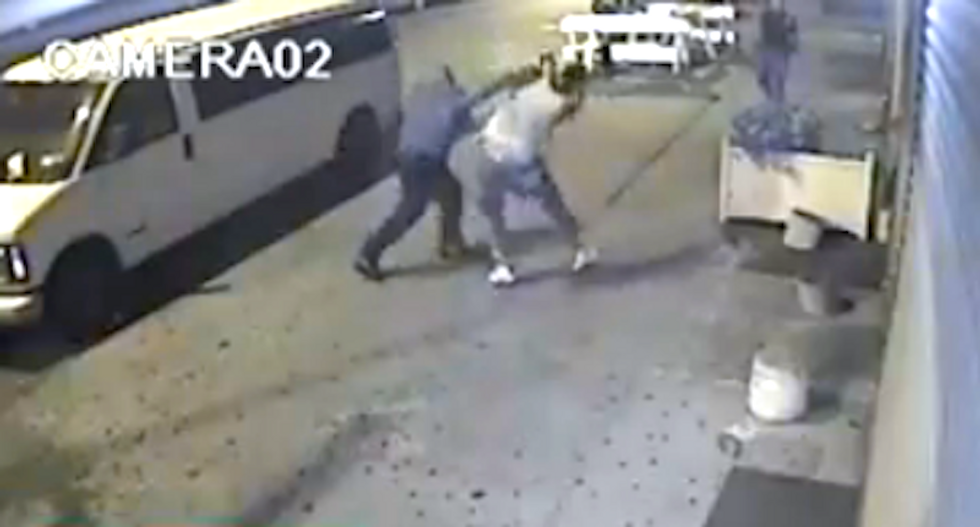 Two New York police officers have been charged with assaulting a teenaged boy during his arrest in Brooklyn, prosecutors said on Wednesday, an unusual case in a city where prosecutions of police for excessive are rare.

After a brief chase on a Brooklyn sidewalk in August, Officers David Afanador, 33, and Tyrane Isaac, 36, can be seen in surveillance video footage hitting Kahreem Tribble, 16, even after he put up his hands in apparent surrender, Brooklyn District Attorney Ken Thompson said in a statement.

The video, which was published by the news website DNAinfo, also shows one of the officers using his gun to hit Tribble, a high school student, in the face.

The officers arrested Tribble for possessing marijuana, but a judge dismissed the criminal charges during his arraignment, and Tribble pleaded guilty only to a violation, according to his lawyer and media reports.

The officers broke some of Tribble's teeth and left him bruised and bloodied, Amy Rameau, Tribble's lawyer, said.

"He's not the same kid he used to be, his parents will tell you that," Rameau said in a telephone interview. "This case is only the beginning. These cops are operating with impunity. They think they can run amok. I hope this will send a message."

The officers were arraigned on Wednesday at state Supreme Court in Brooklyn, the statement said.

The police department suspended one of the officers without pay and put the other on modified duty, Mayor Bill de Blasio said shortly after the video was first published about a month ago.

The police department declined to answer questions about the officers and the prosecution.

Lawyers for the officers were not immediately reachable for comment.

The last time city police officers were prosecuted for brutality was in 2008, according to the New York Daily News, when three officers were charged with forcing a baton into a man's anus during an arrest. A jury acquitted the officers.

In New York City's Staten Island, a grand jury is considering whether to indict the police officers who, according to the city's medical examiner, killed a man named Eric Garner while arresting him for peddling loose cigarettes in July. One of the officers compressed Garner's neck with a banned chokehold, the medical examiner ruled.