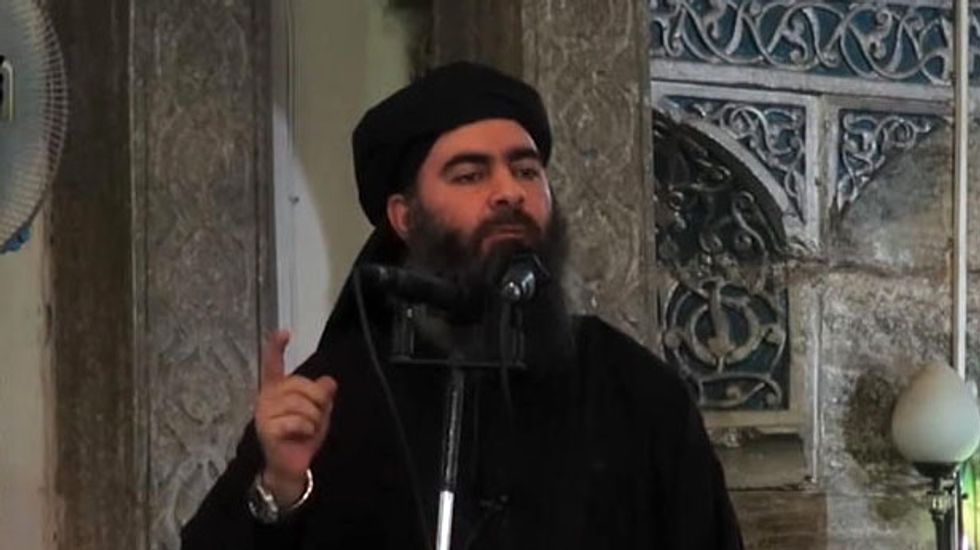 The leader of the Islamic State (IS) jihadist group, Abu Bakr al-Baghdadi, aka Caliph Ibrahim (AFP)

The death of the elusive Baghdadi would be a major victory for the coalition of countries carrying out air strikes against IS and providing assistance to Iraqi forces fighting to regain large areas of Iraq that the jihadists have overrun.

The announcement of the strikes came after President Barack Obama unveiled plans to send up to 1,500 more US troops to Iraq to advise and train the country's forces, deepening Washington's commitment to the open-ended war against IS.

A senior Iraqi intelligence official said there was no "accurate information" on whether Baghdadi was killed but that authorities were investigating.

"The information is from unofficial sources and was not confirmed until now, and we are working on that," the official said.

US Central Command, which oversees American forces in the Middle East, on Saturday said that coalition aircraft conducted a "series of air strikes" against "a gathering of (IS) leaders near Mosul."

"We cannot confirm if (IS) leader Abu Bakr al-Baghdadi was among those present," said CENTCOM spokesman Patrick Ryder.

The US-led strikes late Friday were a further sign of "the pressure we continue to place on the ISIL terrorist network," he said, using another acronym for the Islamic State group.

The aim was to squeeze the group and ensure it had "increasingly limited freedom to manoeuvre, communicate and command".

"I can't absolutely confirm that Baghdadi has been killed," General Nicholas Houghton, the chief of staff of the British armed forces, told BBC television on Sunday. "Probably it will take some days to have absolute confirmation."

Washington has offered a $10 million reward for his capture, and some analysts say he is increasingly seen as more powerful than Al-Qaeda chief Ayman al-Zawahiri.

The Iraqi government responded Saturday to announcements from the US and other countries that trainers would be sent to the country, saying in a statement that: "This step is a little late, but we welcome it."

The government had requested that members of the international coalition help train and arm its forces, the statement said.

"The coalition agreed on that and four to five Iraqi training camps were selected, and building on that, they have now begun sending the trainers," it said.

The new troops announced by Obama would roughly double the number of American military personnel in the country to about 3,100.

Multiple Iraqi army divisions collapsed in the early days of the jihadist offensive in northern Iraq, leaving major units that need to be reconstituted.

Obama had resisted keeping US troops in Iraq earlier in his term, vowing to end the American presence that began with the 2003 invasion and lasted until 2011.

The fight to regain ground from IS will take a heavy toll on the predominantly Sunni areas in Iraq that the group now holds.

In Jurf al-Sakhr, an area south of Baghdad that has been retaken from the jihadists, the conflict left houses burned, buildings and roads rigged with bombs and dozens upon dozens of once-soaring palm trees felled.

In neighbouring Syria, more than 1,000 people, most of them jihadists, have been killed in the battle for the town of Kobane since IS launched an offensive aiming to take it nearly two months ago, the Syrian Observatory for Human Rights monitoring group said.

The Kurdish fighters defending the town have been joined by Syrian rebels who have fought both President Bashar al-Assad's regime and IS, as well as by Iraqi Kurdish peshmerga forces.

The Observatory also said Sunday that Syrian regime air strikes on a town held by IS killed 21 civilians and wounded 100.

Aircraft dropped seven barrel bombs and other explosives late Saturday on the IS-held town of Al-Bab northeast of the city of Aleppo, it said.

Syrian rebels and local Al-Qaeda affiliate Al-Nusra Front also seized the southern of town of Nawa Sunday from troops loyal to Assad after months of intense fighting, the Observatory said.