Islamic State militants claim to have beheaded another US hostage 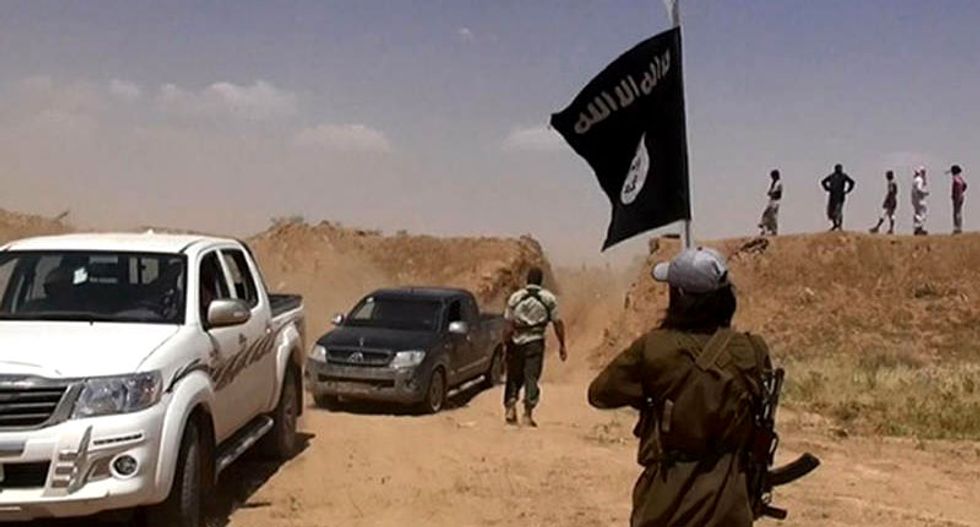 An image made available by the jihadist Twitter account Al-Baraka news on June 11, 2014 allegedly shows militants of the Islamic State group on the Syria-Iraq border (AFP Photo/)

Islamic State militants said in a video on Sunday they had beheaded U.S. hostage Peter Kassig and warned the United States they would kill other U.S. citizens "on your streets".

The announcement of Kassig's death, in what would be the fifth such killing of a Western captive by the group, formed part of a 15-minute video posted online in which Islamic State showed the beheadings of at least 14 men it said were pilots and officers loyal to Syrian President Bashar al-Assad.

In Washington, President Barack Obama's National Security Council (NSC) said the U.S. government was working to confirm the authenticity of the claim.

"If confirmed, we are appalled by the brutal murder of an innocent American aid worker and we express our deepest condolences to his family and friends," NSC spokeswoman Bernadette Meehan said in a statement.

Other Western leaders and officials also condemned the killing.

The video did not show Kassig's beheading but showed a masked man standing with a decapitated head covered in blood lying at his feet. Speaking in English in a British accent, the man says: "This is Peter Edward Kassig, a U.S. citizen."

Reuters could not immediately verify the authenticity of the footage, which appeared on a jihadist website and on Twitter feeds used by Islamic State.

In a statement, Kassig's parents Ed and Paula Kassig said they were aware of news reports "about our treasured son" and were awaiting confirmation from the government as to their authenticity. They asked that in the meantime their privacy be respected.

The man in the video spoke with the same southern British accent as the killer of previous hostages, dubbed "Jihadi John" by British media. He was believed to have been wounded in an air attack on a meeting of IS leaders in an Iraqi town close to the Syrian border earlier this month, some media reports have said.

"To Obama, the dog of Rome, today we are slaughtering the soldiers of Bashar and tomorrow we will be slaughtering your soldiers," a masked militant says, predicting Washington would send more troops to the region to fight Islamic State.

"And with Allah's permission ... the Islamic State will soon ... begin to slaughter your people in your streets."

The format of the video was different from previous such announcements, not only because it showed other beheadings but also because these were shown in graphic detail. The purported location was also disclosed, the northern Syrian town of Dabeq.

Kassig, a 26-year-old from Indiana, is also known as Abdul-Rahman, a name he took after his conversion to Islam while in captivity. His parents have said through a spokesperson their son was taken captive on his way to the eastern Syrian city of Deir al-Zor on Oct. 1, 2013.

A former soldier, Kassig was doing humanitarian work through Special Emergency Response and Assistance, an organization he founded in 2012 to help refugees from Syria, the family has said.

The masked militant, who appeared to be the leader of a beheading squad, said Kassig was buried in Dabeq, near the Turkish border.

"Here we are burying the first American crusader in Dabeq. Eagerly waiting for the remainder of your armies to arrive," he says.

British Prime Minister David Cameron said he was horrified by the "cold-blooded murder". Britain's Foreign Office said it was analyzing the video.

The beheadings of the Syrian personnel were filmed in death squad style, with militants standing behind a kneeling man in a dark blue overall. In slow motion shots, each of the militants is shown drawing a knife from a box on the side of the road.