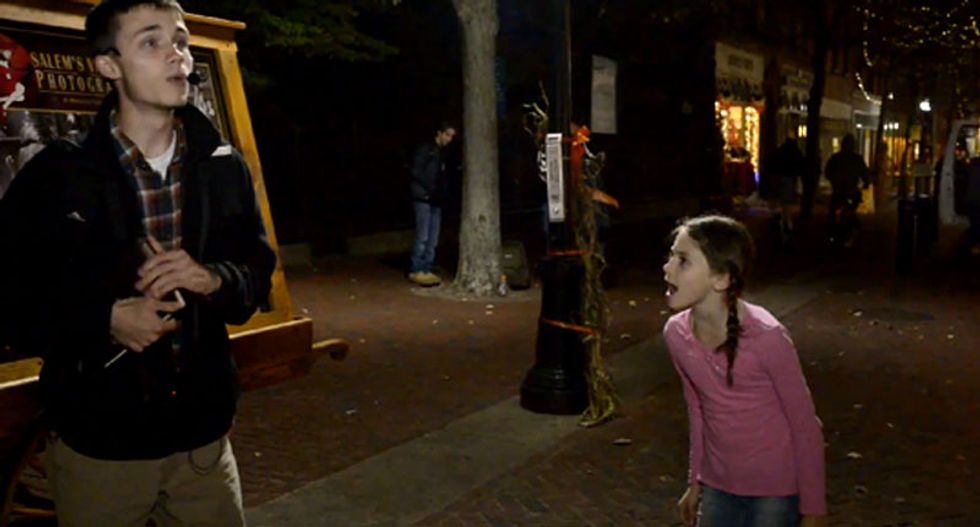 A young girl in Salem, Massachusetts, apparently had her fill of a street preacher who was attempting to warn passers-by of their impending doom on Halloween.

As the preacher loudly proclaimed that Jesus was the only hope of salvation, the young girl shouted back, "zip your lips!"

"Stop talking, no one listens," the girl added, following up shortly later with, "piehole should be quiet!"

The street preacher ignored the girl.

The encounter was filmed by Robert Goss-Kennedy, who uploaded the video to YouTube and LiveLeak.

"Every year Salem is inundated with street preachers during our Halloween celebrations. They spend most every weekend during October telling us to 'Turn or Burn.' I've been recording their interactions with people for a couple of years now for a long running art project, and while this young guy was preaching, a little girl just ran up and started laying into him," he explained on LiveLeak.

"I’m usually not a fan of people out-obnoxious-ing street preachers in order to get them to stop… but somehow, when this little girl does it, I can’t stop watching," Hemant Mehta of the Friendly Atheist blog remarked.