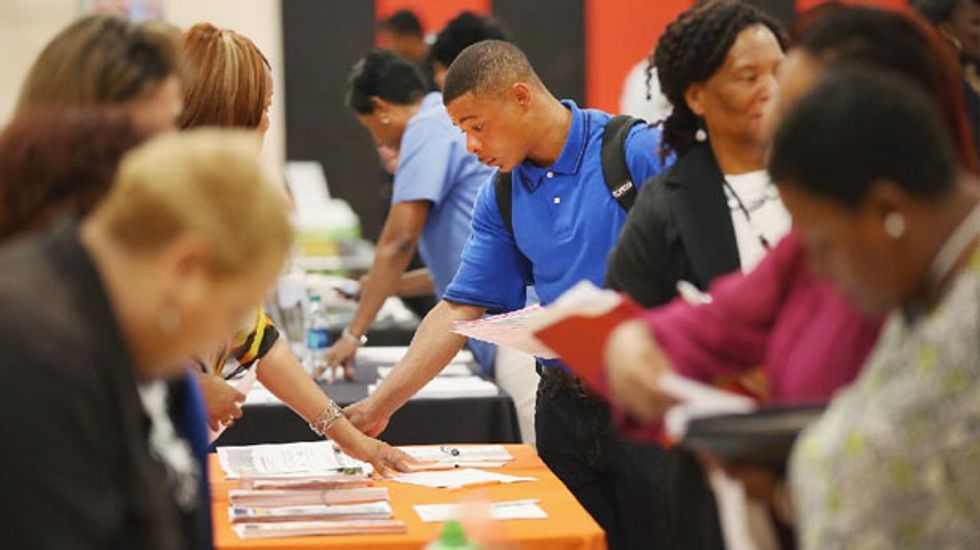 Employers probably added 231,000 new jobs to their payrolls after boosting them by 248,000 in September, according to a Reuters survey of economists. The unemployment rate is forecast holding steady at a six-year low of 5.9 percent.

"It all speaks to the story that the U.S. can sustain pretty strong growth even when there are concerns about growth slowing in places like China and the euro zone," said Jeff Greenberg, a senior economist at JP Morgan Private Bank in New York.

Job growth has exceeded 200,000 in seven of the last eight months, sufficient strength to keep the economy on a higher growth path after it expanded at a 3.5 percent pace in the third quarter. The relatively strong pace of job gains also signals that the slack in the labor market is being absorbed.

The Labor Department will release its monthly employment report at 8:30 a.m. (1330 GMT) on Friday.

The Federal Reserve last month struck a fairly upbeat tune on the jobs picture as it ended its bond buying program, dropping its characterization of labor market slack as "significant" and replacing it with "gradually diminishing."

Sturdy job gains on their own, however, will probably not be enough to convince the U.S. central bank to start raising interest rates before the second half of 2015 given a still low level of inflation.

Wage growth has been the missing piece of the jobs recovery and without significant increases, most economists say the Fed will be in no rush to lift benchmark lending rates that it has kept near zero since December 2008.

The employment report is expected to show that average hourly earnings increased 0.2 percent last month after being flat in September. That would leave the year-on-year change at a tepid 2.1 percent.

But other data have begun to show wage growth accelerating.

"I don't think anybody will be surprised if we start seeing ... a modest firming up of wages," said Anthony Karydakis, chief economic strategist at Miller Tabak in New York. "This will be a welcome development for the Fed, but not something that will make them move sooner rather than later."

Investors will also watch other metrics on Fed Chair Janet Yellen's so-called dashboard, such as the labor force participation rate and the ranks of the long-term unemployed, for clues on the timing of the first rate hike.

The participation rate, or the share of working-age Americans who are employed or at least looking for a job, is expected to bounce back after two straight months of declines.

As for job gains, they are likely to be broad-based.

Private-sector employment is forecast to increase by 222,000, with a second straight month of gains in manufacturing and a solid increase in construction.

Retail hiring is also expected to have accelerated as stores gear up for a busy holiday shopping season, but the closure of casinos in New Jersey is expected to have slowed employment gains in the leisure and hospitality sector.