John Oliver: Americans foolishly 'spend more on the lottery than they do on America' 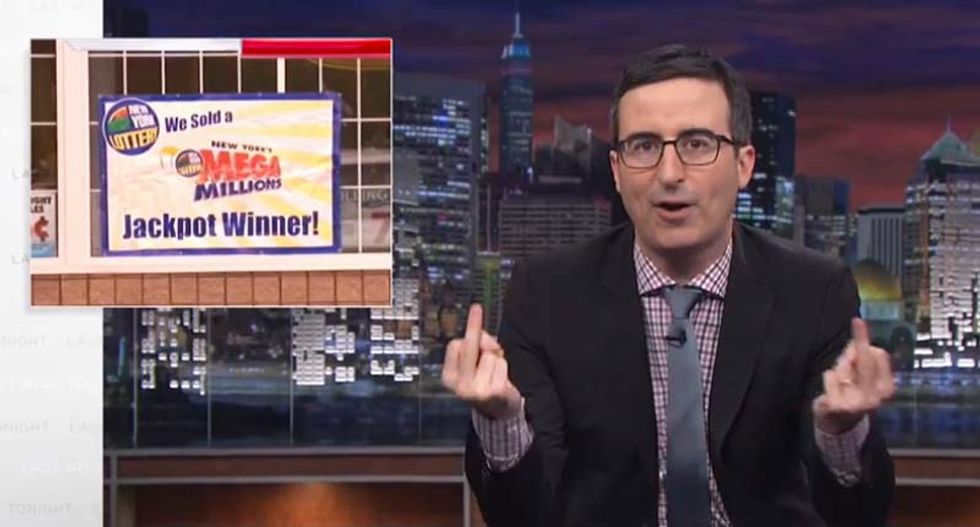 On the final episode of HBO's Last Week Tonight for the year, host John Oliver took a look at state lotteries and how they disproportionately take money from the poor by selling hope while failing to deliver on the promise of a better life or improved funding of state programs.

Noting that 44 states now conduct state lotteries, Oliver pointed out that the states spend half of a billion dollars promoting them every year because they are "a massive money maker."

Oliver pointed out that in 2013 state-run gambling operations took in over $68 billion in revenue, the bulk of which comes from lower income households.

Oliver noted that the odds of winning the lottery are one in 176 million, with one man explaining that the chances of winning the Mega Millions lottery is "akin to be hit by lightning at the same time you're being eaten by a shark."

"That is both an evocative image and an amazing pitch for a movie" Oliver added.

Describing the pitfalls that accompany winning the lottery, from winners blowing through the money to a man hiring a hitman to kill his brother over a $16 million payout, Oliver compared it to marrying Tom Cruise.

"It seems winning the lottery can be like marrying Tom Cruise," he explained. "Sure, it seems amazing in your mind. You might even dream about it happening one day. But if it actually does, five years later the magic will be over, you'll be estranged from your family, and you will have seen things you can never un-see."