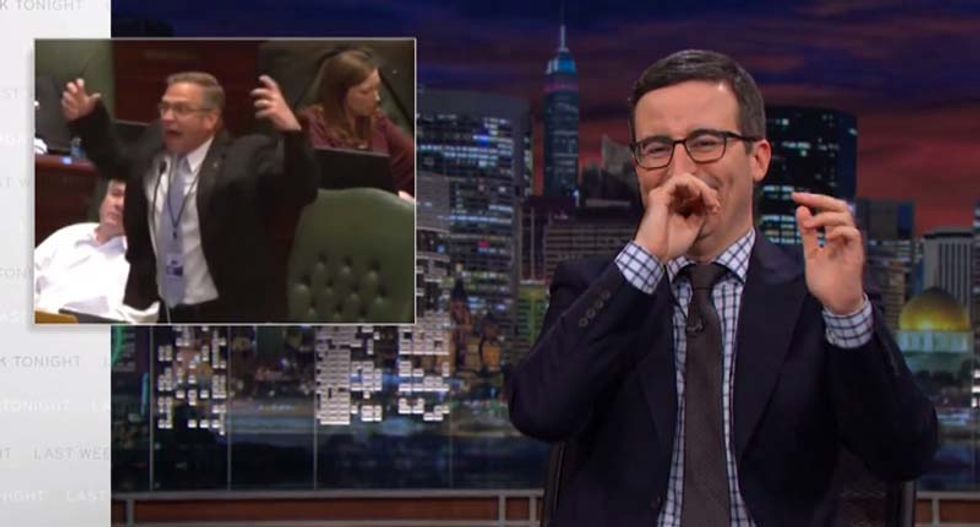 On Last Week Tonight, host John Oliver shifted the focus on the midterm elections away from the national races to the state legislatures which he called "the frat houses of democracy."

Noting that the current Congress is shaping up to be the least productive in history, Oliver wondered why all of the attention is being paid at the national level when, "down at the local level, everything is happening."

"I know it can be hard to take candidates for state houses seriously, partly because of their ridiculous ads," he explained before showing a collection of clips including one from a candidate in Montana "declaring his belief in the US Constitution over a shot of the Declaration of Independence."

"The other problem is, whenever you do hear about state legislatures, it's because something crazy has happened. Like a fist-fight between two old men in the Alabama senate, or a Florida state senator looking at topless photos during an abortion debate. Or this California assemblyman discussing his sex life into a live microphone," Oliver said before running video of former Assemblyman Mike Duvall talking into an open mic about "spanking" a "bad girl" lobbyist.

"State legislatures are hilarious," he continued. "There's only one problem. Increasingly, they're the places where most legislation is actually taking place. So far this session Congress has passed just 185 laws. State legislatures have passed more than 24,000."

After reminding viewers that state governments are known as the "laboratories of democracy," Oliver pointed out that states have enacted over 200 bills restricting abortion in the past three years.

"A law which passed in Mississippi," he explained, "is so restrictive it could close the one remaining abortion clinic they have in the entire state. Meaning a Mississippi woman, right now, could be saying to herself 'I need to go somewhere more progressive, like Alabama.'"