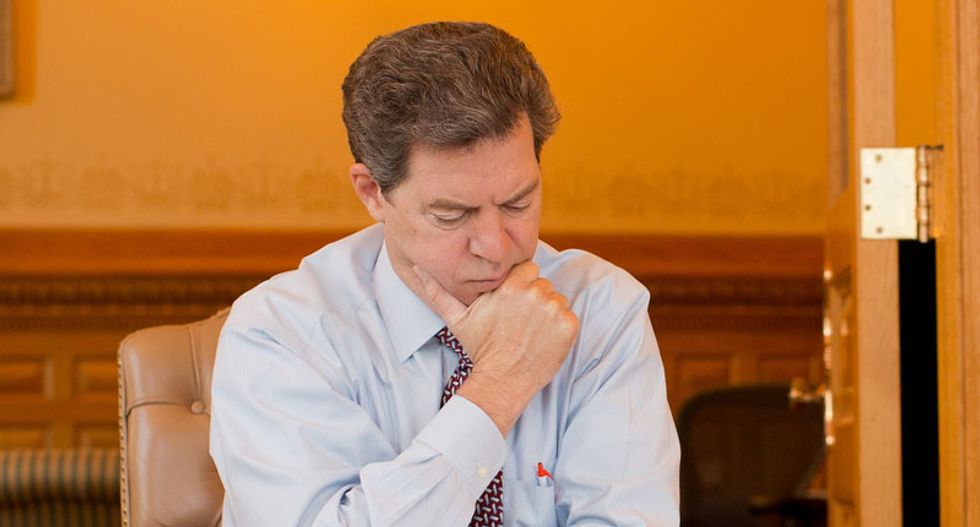 The 2014 midterm elections were full of surprises, mostly bad for the Democratic Party. Many Democratic candidates were defeated in races where the polls showed them with small but consistent leads.

Chief among those races where Democrats snatched defeat from the jaws of victory was the Kansas governorship where incumbent Republican Sam Brownback surprisingly won reelection 50%-46% over his Democratic challenger, state legislator Paul Davis.

After fourteen years in the U.S. Senate and a failed 2008 presidential campaign, Brownback easily won the Kansas governorship in 2010. A stalwart of the Christian conservative movement, his rise to the governorship signaled the triumph of staunch conservatives within the Kansas Republican Party.

Kansas is a strong Republican state, but it is more Republican than conservative. Gallup 2014 data showed that 47% of Kansans identify as Republican, but 62% are moderate or liberal. Kansas has long functioned as essentially a three party state, with Democrats fighting the winners of conservative versus moderate brawls in Republican primaries.

Brownback promised that his governorship would be a “radical experiment” in conservative governing that would show America that conservative Republican principles created prosperity.

After successfully purging most moderate Republicans from the state legislature with the help of the Chamber of Commerce and political action committees affiliated with the billionaire Koch Brothers, Brownback enacted the centerpiece of his experiment: deep income tax cuts for most citizens, the elimination of income taxes on business owners (and eventually all Kansans), and a higher sales tax.

Brownback promised that his experiment in supply-side economics would create economic boom and reverse the state’s population loss. However, that promise has not come to fruition.

Instead, the state’s economic and job growth rates lag behind its neighbors and state revenue projections have fallen massively short of their desired targets.

Rather than modifying his experiment, Brownback reassured Kansans that there would be pain in the short term, but growth in the long term.

Part of that pain, however, has come from substantial budget cuts, especially to education and other popular government services. Indeed, at a time of slow but general economic recovery in the US when most states are restoring education budget cuts from the recession, Kansas has been one of the few states cutting education investment.

In his first month in office in January 2011, he earned strong positive job approval ratings from Kansans: 55% approval versus 34% disapproval. But those numbers soured by late 2011, sliding to just 38% approval and 54% disapproval days before the 2014 election.

Surely, no politician with a negative 16 job approval could survive. Yet Brownback did.

Judging from the exit polls, Brownback survived because only two-thirds of Republicans who claimed to support Davis in the tracking polls actually voted for the Democrat in the end. With Republicans constituting nearly half of the Kansas electorate, that reversed the polls in Brownback’s favor.

However, the same electorate that gave him a second term also said in the exit poll that his tax cuts hurt rather than helped the economy by a 52%-41% margin.

Brownback campaigned strongly on the message that Davis was just another “liberal Obama Democrat.” Evidently, many Kansas Republicans found that message persuasive, holding their noses to reelect Brownback as an anti-Obama message. That combined with stronger than expected Republican turnout on Election Day saved him.

The message from Kansas

Most Republicans, including the National Review and many party leaders, gave Brownback up for dead. Indeed, shortly before the election Brownback even closed his presidential campaign account, a stunning move given that many conservatives thought his experiment could carry him to the 2016 Republican nomination.

That made it all the more jubilant for Brownback when he declared his underdog victory to be a mandate for his experiment—staying the course on tax cuts and trimming the state budget even further. And for many of his conservative allies in the state legislature, that perceived mandate also includes freedom to move Kansas in an even more conservative direction on hot button social issues like abortion and gay rights.

For Kansas, a second Brownback term means the status quo—continuing policies that have not stimulated the economy as promised. For Kansans’ sakes, one only hopes that that trend reverses. But Brownback’s close call should be a warning sign for Republicans, especially Tea Party conservatives.

Paraphrasing Ronald Reagan and Richard Nixon from how they talked about racial issues, voters do not like to be experimented on.

Kansas voters declined to hold Brownback accountable for his perceived policy failures, choosing party above policy. Voters in other less Republican states might not be as kind to conservatives looking to enact their own experiments. With less of a Republican tidal wave, Brownback likely would have lost.

Conservatives looking to survive politically will misinterpret Brownback’s narrow win as a mandate at their own peril.

Patrick R. Miller does not work for, consult to, own shares in or receive funding from any company or organisation that would benefit from this article, and has no relevant affiliations.