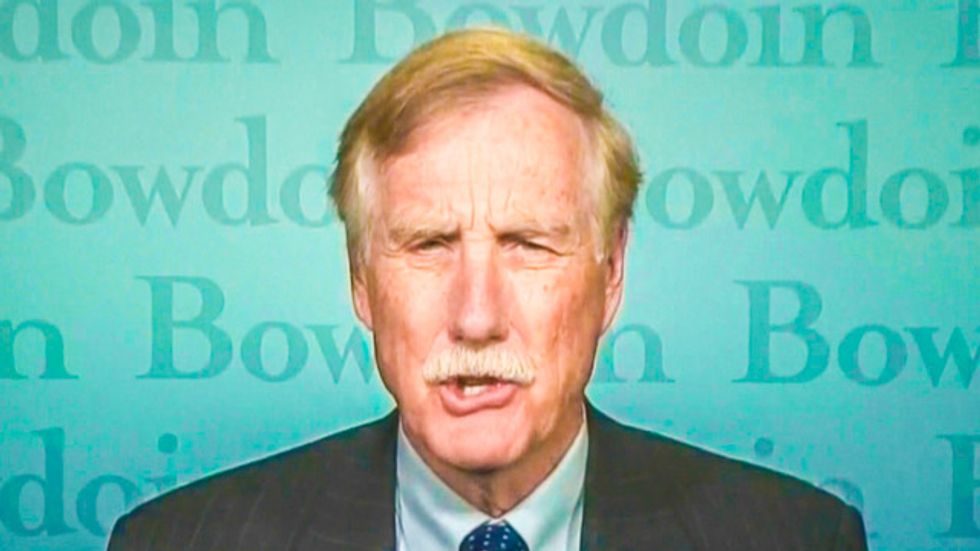 Keystone XL supporters in the U.S. Senate faced tough odds on Tuesday in passing a bill to approve the oil pipeline from Canada after one lawmaker they hoped might be a "yes" said he would vote against the project.

"Congress is not – nor should it be – in the business of legislating the approval or disapproval of a construction project," Senator Angus King, an independent from Maine, said in a news release.

The Senate is expected to vote as early as 5:30 p.m. EST on Tuesday.

With the 100-member chamber one vote short of the needed 60 to pass a version of a bill that sailed through the House of Representatives last week, backers including Democratic Senator Mary Landrieu lobbied for more support.

Senate staffers pressured Democrats including Chris Coons of Delaware to reverse their opposition to the pipeline. But Coons had used a similar line to King's in saying Congress should not issue permits when he said last week he would vote no. "He's still a no," a Coons aide said Tuesday afternoon.

Construction of TransCanada Corp's Keystone XL pipeline has broad support in Louisiana, an oil-producing state, where Landrieu faces an uphill battle to win a new six-year term in a December run-off election.

Republican Senator John Hoeven of North Dakota, who introduced the bill with Landrieu, was asked by reporters at the Capitol on Tuesday if there were enough votes to pass it. "I think so," he said.

Hoeven told MSNBC the same thing earlier on Tuesday, adding: "We're at 59 votes confirmed. We've got a couple of maybes. I think there's one or two more that may join. So I think we have a good shot to get it."

King, who often votes with Democrats, had been seen as a possible swing vote despite his support of climate activism. He said he was "frustrated" by President Barack Obama's failure to make a decision on the pipeline that has been pending for six years and urged him to make a decision soon.

Republicans generally support Keystone, which would transport more than 800,000 barrels of oil per day from Alberta to Nebraska, en route to the Gulf of Mexico.

But many environmentalists oppose the project, saying development of the oil sands would spike carbon emissions linked to climate change and that the oil could be sold abroad. Construction workers, unions and energy companies say it would create thousands of jobs.

Activists with the environmentalist group 350.org on Tuesday protested at the offices of Democratic Senators Tom Carper of Delaware and Michael Bennet of Colorado, who said recently they will support the bill.

"If we allow this pipeline to go through, we are moving backwards on clean energy," said Nebraska farmer Art Tanderup at a planning meeting for the protest, adding that his Nebraska farmland sits in the middle of the proposed pipeline route.

If Keystone does not pass on Tuesday, Hoeven plans to reintroduce the bill in January or February, when it has a better chance of obtaining 60 votes after Republicans picked up seats in the midterm elections. Next year Hoeven could also attach a Keystone measure to a wider bill that Obama would find hard to veto.

Obama has not indicated whether he would veto a Keystone bill. But he raised new questions about the project during a trip to Asia late last week, saying it would not lower fuel prices for U.S. drivers but would allow Canada to "pump their oil, send it through our land, down to the Gulf, where it will be sold everywhere else."

TransCanada shares were down 69 Canadian cents at C$55.87 on the Toronto Stock Exchange on Tuesday.

By Timothy Gardner and Susan Cornwell