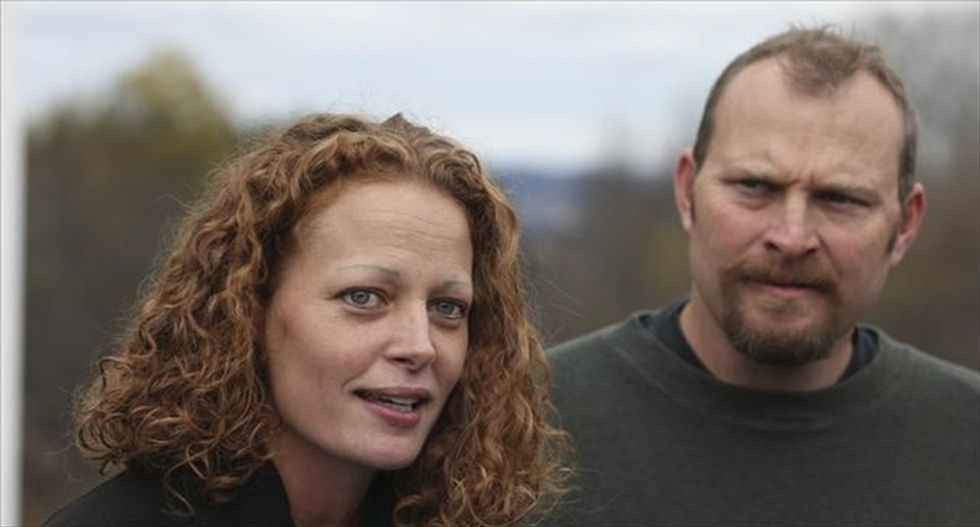 Nurse Kaci Hickox (L) joined by her boyfriend Ted Wilbur speak with the media outside of their home in Fort Kent, Maine on Oct. 31, 2014. Photo by Joel Page for Reuters.

Maine has reached a settlement with a nurse who was briefly quarantined in her home after treating victims of Ebola in West Africa, allowing her to travel freely in public but requiring her to monitor her health closely and report any symptoms.

The settlement, filed in nurse Kaci Hickox's home town of Fort Kent, in Maine's far north, keeps in effect through Nov. 10 the terms of an order issued by a Maine judge on Friday.

Hickox returned to the United States last month after treating Ebola patients in Sierra Leone and was quarantined in a tent outside a hospital in New Jersey for four days despite showing no symptoms before being driven to her home in Maine.

She sharply criticized the way both New Jersey Governor Chris Christie and Maine Governor Paul LePage responded to her case. Christie and LePage have defended how they handled it.

President Barack Obama will meet with his national security and health advisers on Tuesday for an update on the Ebola response.

The most deadly outbreak of Ebola on record has killed 4,951 people, mainly in Liberia, Guinea and Sierra Leone.

"The governor was outspoken in his views on the case. He was speaking for people in the state that had real fear about the risks," said Eric Saunders, an attorney for Hickox. "It's hard to deny the fear and the safety concerns. But at the same time, we have to bear in mind what the law and the science says."

The Ebola virus is transmitted in bodily fluids, such as blood or vomit, of people showing symptoms of the disease, according to medical experts. It is not airborne.

Representatives for both LePage and the Maine attorney general declined to comment.

However, nearly 75 percent of Americans surveyed in a Reuters/Ipsos poll believe medics returning to the United States after treating people with Ebola should be quarantined, and 80 percent believe the healthcare workers' movements should be controlled.

A patient being monitored in North Carolina for Ebola after arriving in the United States last week from Liberia has tested negative for the disease, state health officials said on Monday, adding that the results still need to be confirmed.

The patient, who arrived at New Jersey's Newark Liberty International Airport on Friday and developed a fever on Sunday in North Carolina, will continue to be monitored in isolation at Duke University Hospital in Durham, officials said.

The person, who was not identified, had no symptoms upon arrival in the United States and had no known exposure to Ebola in Liberia, the department said.

U.S. health care providers have been on heightened alert for potential Ebola cases, and officials in North Carolina said they had been working since the summer to prepare for the possibility of the virus being diagnosed in the state.

In Oregon, a Liberian woman hospitalized last week over Ebola fears has tested negative for the virus, a state health officer said Monday. Five other people who recently arrived from West Africa were being monitored, the officer said.

Some states have restricted the movement of people returning to the United States from the stricken West African nations beyond guidelines from the U.S. Centers for Disease Control and Prevention.

Only one person in the United States is currently being treated for Ebola, a New York doctor, who is in stable condition.