Many immigrants fear coming out of hiding despite Obama's action 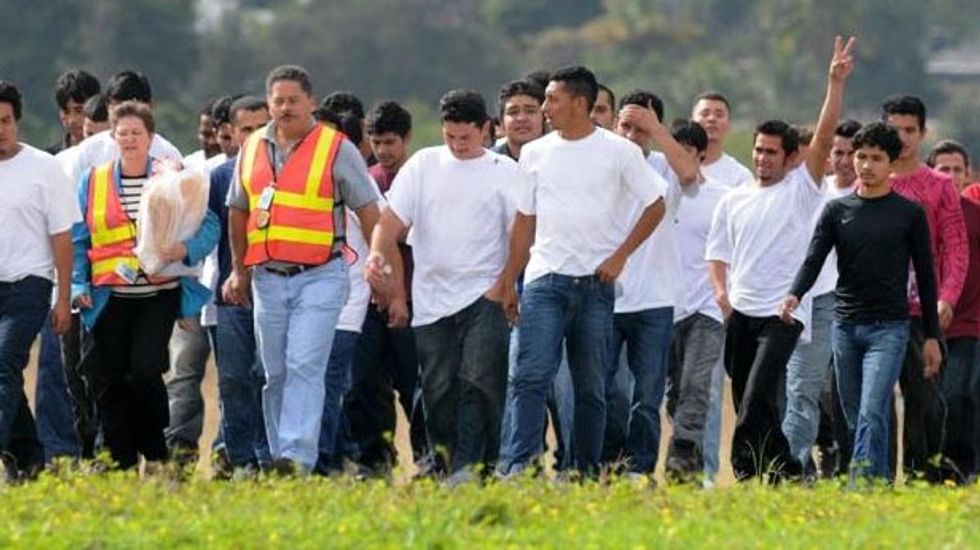 Norma Martinez, an undocumented mother of two girls born in New Jersey after she arrived illegally from El Salvador in 2007, worries the Obama administration's new immigration program might provide fleeting protections that a new president could easily reverse.

"I don't want to go on living in hiding," said Martinez, 34, adding that she would happily sign up and pay a fine to avoid deportation.

"But what happens if they take the program away, it would mean automatic deportation," she added, saying she and her husband, also undocumented, might be better off staying out of sight until a permanent solution is reached.

In an address to the nation on Thursday night, President Barack Obama outlined executive action to let some 4.4 million parents of U.S. citizens and legal permanent residents remain in the United States temporarily, without the threat of deportation. He said he took the step after Congress failed to pass immigration reform legislation.

As details of the speech filtered through immigrant communities across the United States, many undocumented Hispanics remained skeptical, saying the new temporary benefits offered by the White House might not be worth the risk of coming out of the shadows.

While Obama's so-called "deferred action" for parents of children who are U.S. citizens or permanent legal residents could offer temporary status to as many as 5 million immigrants, the many shortcomings detract from its benefits, experts say.

"It's a step in the right direction, but it's going to fall far short of the mark," said Cheryl Little, a veteran immigration advocate and director of Miami-based Americans for Immigrant Justice.

"Deferred action is not legal status, it's simply a temporary reprieve from deportation," she added.

Eligible applicants would have to come forward and provide all relevant documents to the immigration authorities, including how long they have been in the country, their source of income, and place of work.

Immigrants who have lived illegally in the United States for many years can be afraid to sign up for fear of future deportation if their temporary status runs out, as well as large fines and exposure to unpaid medical bills, said Mark Hugo Lopez with the Pew Hispanic Center.

"Who knows who the next president will be and if they might take this protection away," he said.

Immigrants may also lack the proper documentation to prove eligibility, he added, amounting to huge uncertainty over the benefits of signing up.

Only 55 percent of the estimated 1.2 million young people eligible under a 2012 program that offered temporary relief for the children of unauthorized immigrants have applied, according to an August report by the Migration Policy Institute.

Deferred Action for Childhood Arrivals (DACA) offers a two-year work permit to qualifying young adults ages 15 to 30 who were brought to the U.S. illegally as children.

Obama's executive action is the most significant move to protect unauthorized immigrants since 1986, when Congress passed legislation allowing almost 3 million people in the country illegally to obtain residency, and ultimately U.S. citizenship.

Even under that program only 36 percent of those eligible became U.S. citizens, said Lopez. "Many of them are too busy working, and it's expensive. They worry about not being able to pass the exam because they don't speak English," Lopez added.

A survey by the Pew Hispanic Center in late October found that only 26 percent of Latino adults were aware of the debate over Obama's use of executive action. Among those who had heard about it 38 percent were either disappointed or angry, while only 25 percent were pleased or very happy.

Miami-born Christy Gaspar, 20, who lives in Homestead in south Florida with her Guatemalan parents, who are legal residents, said she worried about six uncles who are undocumented.

"They are not going to trust anything the president says," Gaspar explained. "He hasn't kept his promises," she added, noting how record number of immigrants have been deported under the Obama administration.

Two weeks ago, federal immigration agents arrested one of her uncles, along with half-a-dozen other men who are in the U.S. illegally, Gaspar said.

"He was let go after being granted a bond, but some of the men were deported," she said.

Another of Gaspar's uncles, Guillermo, has lived in the United States for 15 years and has two U.S. born children, but was unsure about Obama's announcement. "I put my faith in God that what he says is true. ... I hope he helps us, but I'm still afraid of being deported."

Mary Alfaro, a 37-year-old undocumented Mexican mother of two U.S.-born children who has been living in south Florida since 1995, called Obama's decision a partial solution.

"We need more than an executive order. We need a law that addresses the immigrant population. It's a small victory. But we are on the right track."