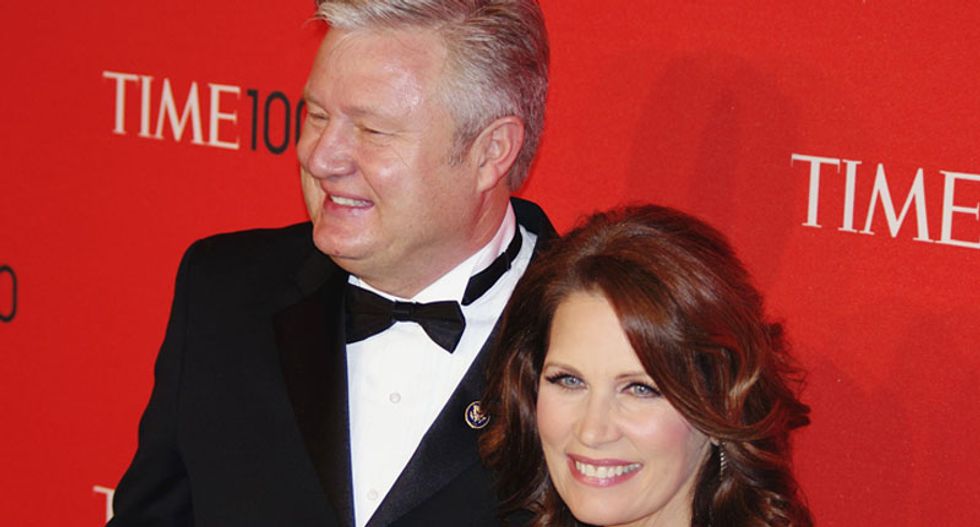 In a radio interview recorded by Right Wing Watch, the husband of outgoing Congresswoman Michele Bachmann defended the controversial “gay conversion” therapy practiced at his clinic saying critics find it "blasphemous" that he attempts to align his patient's Christian faith with their sexuality.

Marcus Bachmann, owner of Counseling Care -- previously known as Bachmann & Associates -- told Jan Markell on 'Understanding the Times' that he and his business are being demonized based upon "myths" that his people attempt to coerce gay patients to set aside their homosexuality.

Bachmann began by wondering "how a Christian counseling agency that is pro-life, pro-family, and pro-marriage" can be controversial.

"I think it's been intertwined with my wife taking a stand and being the author in the Minnesota state senate for the Marriage Amendment. Marriage between a man and a woman," he explained. "Promoting that, pro-life, pro-marriage stand in Congress. And it's as if that was the unforgivable sin from the left."

He continued, "I think it's been misconstrued, I think our agency has been unfortunate -- there have been myths made up that we are people that coerce and pressure and manipulate people. That's the last thing we would do. We are people of ethics."

After Bachmann stated "people will choose," Markell backed him up saying his patients aren't "battered by scripture," when they only come in to talk.

Bachmann agreed explaining he helps patients of faith bring their lives into "alignment."

"Once the far-left understood that we were actually creating a safe place, a place where people who said I have this issue with same-sex attraction, this desire. I’m a believer, I’m a person of faith and it’s conflicting with my values systems. Anyone who would walk alongside and then encourage that person’s values systems and their beliefs and bring that in alignment, that is like blasphemous to the other side," he said. " How dare you even consider being involved in someone who has decided or is desiring that to influence in any way shape or form another side in the book on this one?"

In 2012 a lesbian filmmaker visited Bachmann's clinic, claiming to be engaged to man, but being attracted to woman.  The counselor continually attempted to convince the woman to "give marriage a try," adding  "What's the worst that can happen?"