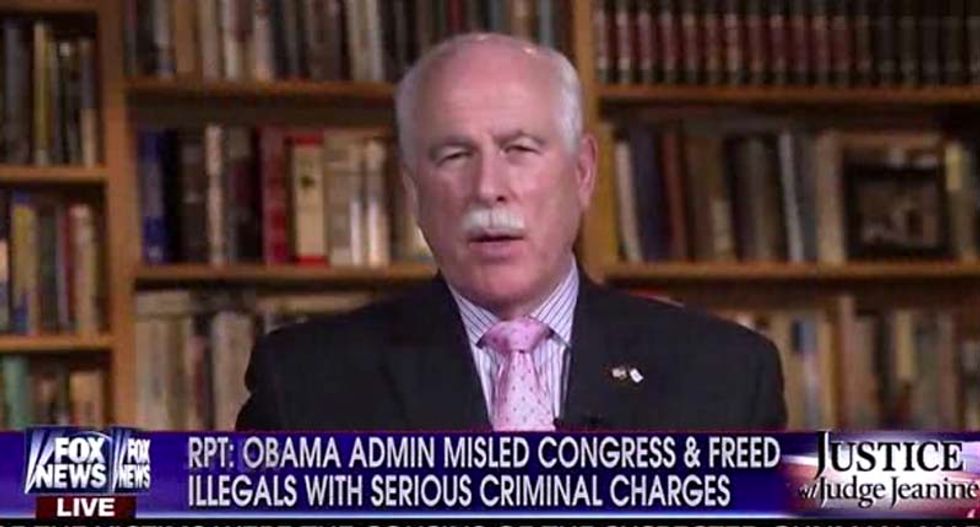 A Massachusetts sheriff is calling on fellow sheriffs around the country to join him in Washington, D.C. to speak out against President Obama’s potential executive action on immigration by citing dubious crime statistics and unsupported health claims.

Sheriff Thomas M. Hodgson of Bristol County Massachusetts sent a letter to sheriffs inviting them to rally in the nation's capital on December 10 and to meet with congressmen, imploring them to take action to secure the border.

According to Hodgson, "Never before in our nation’s history has it been so important for the American sheriffs to stand united and speak with one voice to secure our nation’s borders.”

In his letter, Hodgson writes, "As you know, the policies of recent years that encourage immigrants to illegally enter our country have created serious threats to our domestic and national security."

The sheriff goes on to claim that "25 people in the United Sates are killed each day by illegal immigrants," before stating "our public health is threatened by new diseases and ailments introduced by people living in our communities illegally."

According to the Southern Poverty Law Center, the assertion that 25 Americans being killed each day by illegals immigrants has been floating around nativist circles since  Rep. Steve King (R-Iowa) mentioned it in 2006. On his website King wrote, "The lives of 12 U.S. citizens would be saved who otherwise die a violent death at the hands of murderous illegal aliens each day. Another 13 Americans would survive who are otherwise killed each day by uninsured drunk driving illegals."

Pressed to explain how he arrived at his numbers, King said he "extrapolated" the numbers from a study provided by the General Accounting Office. According to the GAO study, only 28 percent of all federal prisoners are either legal or illegal immigrants without distinguishing between the two. The study also stated that about 50% of those immigrants were  charged with being in the country illegally, with 12 percent were in custody for  murder, rape, robbery or other violent crimes.

As to the assertion that illegal immigrants are bring diseases and ailments into the country, doctors dispute the claim arguing that many of the immigrants arriving come from countries with higher vaccination rates than the U.S.

Hodgson said the Obama administration seeks to “to break down now-secure communities and then rebuild it back up again, and this is consistent with the Obama administration's attempt to try to get more and more people, illegals in here, and the Deferred Action for Childhood Arrivals is a perfect example of that, where we've seen these kids coming in in droves, and we're not able to manage it.”

In his own community, Hodgson is known as a hardliner, eliminating televisions, weight-lifting equipment, and smoking from his jails while instituting chain gangs.  During his tenure inmates have rioted twice over living conditions, with a judge once criticizing him for not giving inmates adequate access to bathrooms.

Watch Hodgson discuss immigration along with Congressman Louis Gohmert in video below uploaded to YouTube by Mass Tea Party: