McCain could shake up US defense in powerful new Senate role 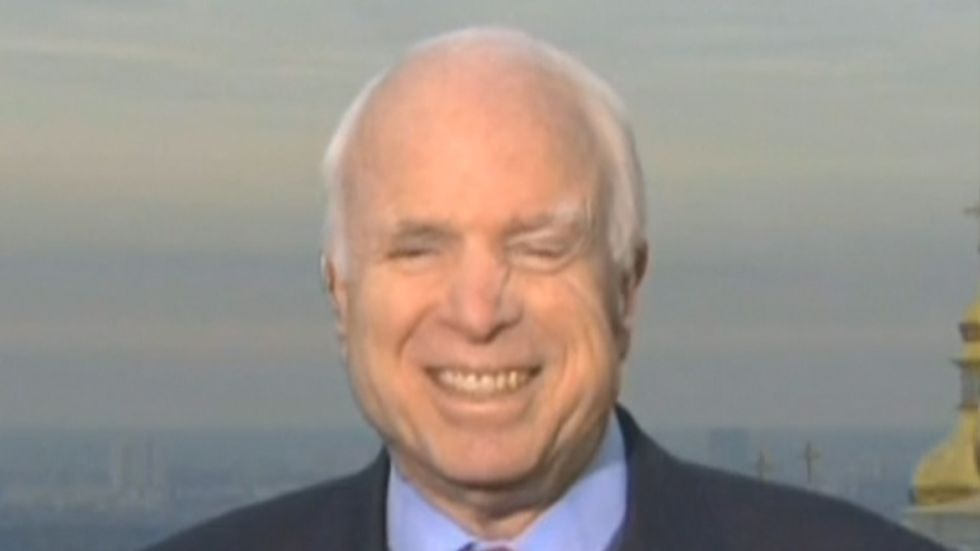 One of President Barack Obama’s noisiest detractors, McCain is expected to take the helm of the powerful Armed Services Committee in the new Republican-controlled U.S. Senate when the U.S. Congress convenes in January.

He has in the past launched investigations into waste in the U.S. defense industry and shaped legislation to end cost overruns on major arms programs as a senior member of the Senate committee.

McCain, a former Navy pilot and Vietnam War prisoner who lost to Obama in the 2008 election, has also criticized the administration on everything from fighting Islamic State militants to arming moderate Syrian rebels, while seeking a tougher U.S. response to Russian aggression in Ukraine. As committee chairman he could summon Pentagon officials to public hearings to explain their strategy on Syria.

He has challenged the U.S. Air Force to end a monopoly rocket launch program with Lockheed and Boeing Co, the Pentagon's top two suppliers, and is pushing for development of a new U.S. rocket engine to end reliance on Russian-built engines that power one of the firm's rockets.

In his new position, McCain would oversee policy legislation that underpins the Pentagon's budget, although the House and Senate appropriations committees oversee the Pentagon's actual finances.

He would play a major role in writing the annual defense authorization bill. It sets policies on everything from defense spending and new weapons to military base closures and the elimination of specific weapons programs. The committee does not control how much money the Pentagon gets, but because it sets policies, it can control how the money is spent.

"I wouldn't forecast any huge shifts right away," said one defense industry executive, speaking on condition of anonymity, noting that McCain had worked closely for years on acquisition reform and weapons oversight with Carl Levin, the Michigan Democrat who now heads the committee.

The executive said companies and defense officials were bracing for more requests for information, briefings and hearings from a McCain-led panel.

U.S. weapons makers are wary of what they see as McCain's propensity to exaggerate problems when they occur, and worry that he does not understand their need as publicly traded companies to generate profits for shareholders.

But, McCain also offers them a ray of hope. He wants to ease automatic across-the-board cuts in military spending that are squeezing defense industry revenues.

McCain's office did not respond to requests for comment.

If McCain becomes chairman, he is expected to focus oversight on weapons programs that failed to meet their targets for cost and delivery schedules, said Brett Lambert, a former senior Pentagon official and industry consultant.

In recent hearings, McCain has singled out the Navy's $34 billion Littoral Combat Ship program. On April 9, he said poor planning had led to a new class of ships that could not survive in combat, cost far more than expected and provide less capability than earlier warships. Navy Secretary Ray Mabus has defended the program.

Congressional aides and industry executives said the F-35, the Pentagon's biggest arms program, had made progress after years of cost overruns and technical setbacks, but McCain has vowed to keep close tabs on it given its importance.

"I would imagine that I'm going to see Senator McCain more than I have been," he said, when asked how a Republican-controlled Senate might affect the program.

McCain is also likely to scrutinize a new presidential helicopter program under way by Sikorsky Aircraft, a unit of United Technologies Corp, and the Navy's stalled plan to develop an unmanned carrier-based drone, a program that is expected to draw bids from Lockheed, Boeing, Northrop Grumman Corp and privately held General Atomics, said Jim McAleese, a Virginia-based defense consultant.