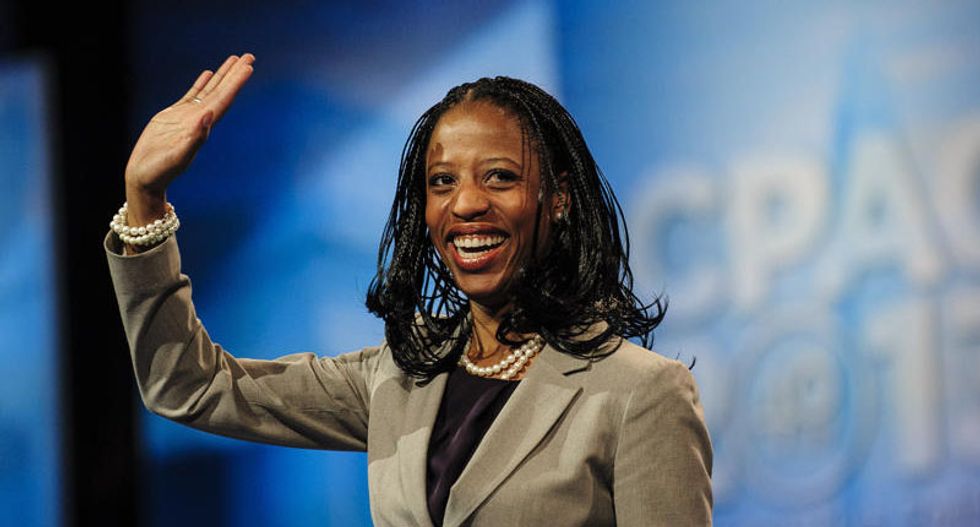 Even her name is media friendly. Mia Love instantly became the darling of the Republican Party on Wednesday, after being elected as its first black female member of Congress -- and she is a Mormon to boot.

She has also rapidly drawn comparisons with Barack Obama, not least since she wowed her party's 2012 national convention with a tale of rags-to-political-riches, much like the young Senator Obama did in 2004.

"Many of the naysayers out there said that Utah would never elect a black Republican LDS woman to Congress," she said at her victory rally, referring to the Church of Jesus Christ of Latter-day Saints, or Mormons.

"Not only did we do it, we were the first to do it," said the 38-year-old, who was previously mayor of Saratoga Springs, a city 35 miles (56 kilometers) south of Salt Lake City.

Love's parents came from Haiti in the mid-1970s, and she recalls in interviews how her father at times took second jobs cleaning toilets to pay for school for their three children.

She graduated from the University of Hartford, Connecticut with a degree in Fine Arts. A Catholic by upbringing, she found the Mormon faith before finding her white Mormon husband Jason Love.

Love is a minority in both her state and church: barely one percent of Utahans are black or African American, while only an estimated three percent of Mormons are. Mormons make up about 60 percent of Utah's population.

She is fond of recalling what her father told her on her day of college orientation: "Mia, your mother and I never took a handout. You will not be a burden to society. You will give back," she notes on her own website.

Love made headlines when she took the stage at the 2012 Republican National Convention in Tampa, Florida -- which nominated Mitt Romney, also a Mormon, as its presidential nominee.

"My parents immigrated to the US with 10 dollars in their pocket, believing that the America they had heard about really did exist," she told the crowd.

"When times got tough they didn't look to Washington, they looked within."

"Since the election of Barack Obama, the Republicans have been more serious about trying to showcase the diversity within the Republican Party," he told the Salt Lake Tribune.

"And Mia Love is potentially the poster child for diversity in the party," he added.

Despite proclaiming her first-black-Republican-congresswoman credentials in her victory speech Tuesday night, Love was keen Wednesday to downplay suggestions that her race or gender won the election.

"Understand that Utahans have made a statement that they're not interested in dividing Americans based on race or gender, that they want to make sure that they are electing people who are honest and who have integrity.

"That's really what made history here. Race, gender had nothing to do with it."

Commentators agreed that Love is a real asset for the Republicans.

She "is poised to become an important symbol for the GOP as the party seeks to broaden its appeal among blacks and other minorities, who typically vote overwhelmingly Democratic," noted the Christian Science Monitor.

The Washington Post added: "A party threatened with electoral extinction among African Americans and immigrants now has someone to brag about in Washington.

"Love's compelling personal story is an oasis. She's not just a black face in what's often described as a party full of angry old white men. She's a path forward," it said.