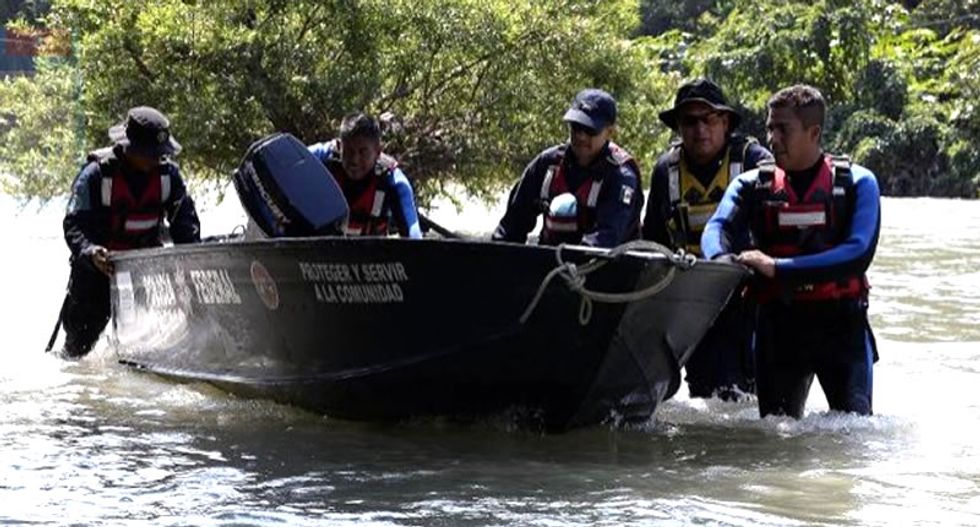 Federal police search the Cocula River, Guerrero State, Mexico on October 29, 2014 for any trace of 43 college students who disappeared on September 26 in Cocula (AFP)

Mexican authorities have found no trace of 43 college students since their disappearance more than a month ago, laying bare a series of missteps in a case that has infuriated the country.

In the first days after the students vanished following a police attack in the town of Iguala on September 26, Guerrero state authorities initially said the students were maybe just hiding.

Meanwhile, Iguala's mayor Jose Luis Abarca had ample time to escape, skipping town two days after the assault along with his wife and the municipal police chief.

The mayor is now accused of ordering the gang-linked local police force to round up the students out of fear they would interrupt a speech by his wife.

Authorities say the corrupt officers handed the 43 students to their allies in the Guerreros Unidos drug gang.

It took nine days after the attack for the attorney general's office to take over the case from state prosecutors.

The mass disappearance has belied President Enrique Pena Nieto's assurances that violence was down in Mexico thanks to better coordination between police agencies.

"There was a delay, an initial negligence by the federal government," Alejandro Hope, a security expert and former Mexican intelligence officer, told AFP.

"In a scientific investigation, anybody knows that the first 48 hours after a disappearance are crucial."

In the first week after the disappearance, relatives conducted their own searches with troops accompanying them for security.

Since then, federal authorities have ramped up the search, deploying more than 2,000 soldiers and police around Iguala to find the young men, all teacher's college students.

Helicopters, horse-mounted police and rescue dogs have combed the hills. Divers have searched the depths for lakes and rivers.

A dozen unmarked graves with 38 bodies have been unearthed, but so far authorities say they have not found the students among the remains.

"They're playing detective, searching anywhere, without any sort of clarity about what happened. The search is turning into a problem for the government because it is creating a perception of incompetence," Hope said.

Authorities have detained 56 suspects, including 36 officers from Iguala and the neighboring town of Cocula along with several Guerreros Unidos members.

Their testimony has been questionable. Two gang hitmen said they had killed 17 of the 43 students and dumped their bodies in a hillside pit, according to state prosecutors.

But Attorney General Jesus Murillo Karam declared on October 14 that the first 28 bodies that were found did not match DNA of any of the students.

Murillo, however, later backtracked, saying the results have yet to be confirmed by independent forensic experts from Argentina who were called in at the request of relatives, who distrust the authorities.

"The problem is that the suspects are not saying the truth about what they did with (the students), so (investigators) are searching about blindly," said Samuel Gonzalez, a former counternarcotics prosecutor.

"You have to negotiate with useful witnesses for them to say the truth. It's all a question of negotiating," Gonzalez said.

Tens of thousands of people have joined protests while parents of the missing have voiced anger about the pace and quality of the investigation.

One of the strangest moments in the probe was last Monday's announcement of an important discovery at a landfill in Cocula, a town bordering Iguala.

The authorities took a small group of reporters to the site, but there were no signs of mass graves or bodies. Officials said days later they were still combing the location for remains.

"There has been a problem of building up expectations," Hope said. "The government feels trapped by public pressure and has felt obligated to give information of low value so as not to give the impression of being negligent."

New York (AFP) - Loretta Lynn, America's groundbreaking country titan whose frank lyricism delving into women's experiences with sex, infidelity and pregnancy touched the nerve of a nation, has died. She was 90 years old.

She "passed peacefully in her sleep" at her ranch in Tennessee Tuesday morning, her family said in a statement sent to AFP.