Mexican president flies to China amid protests over suspected massacre 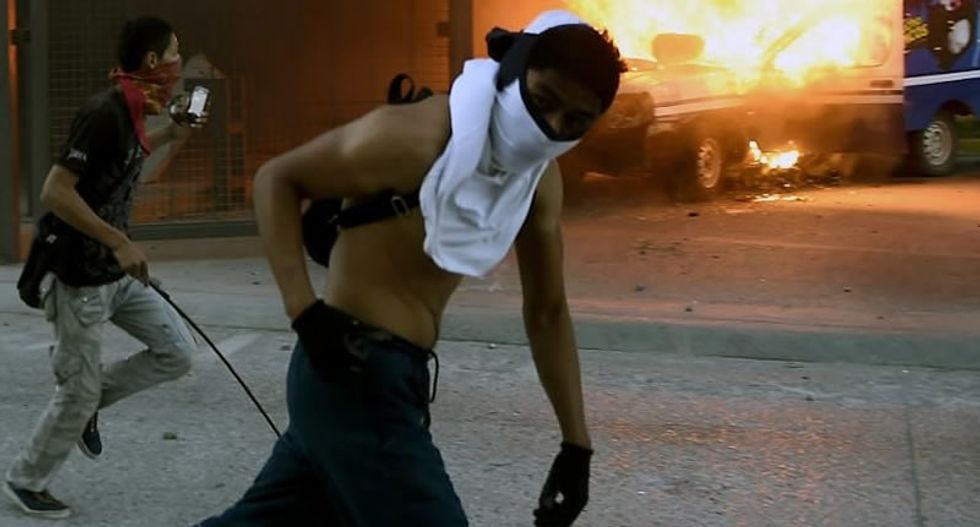 Mexico's president flew Sunday on a six-day trip to China and Australia despite violent protests over the suspected massacre of 43 college students by a gang in league with corrupt police.

Angry protesters tried to break into Mexico City's National Palace late Saturday while others torched several trucks in the southern state of Guerrero, where the students vanished in September.

Thousands of people marched in the capital over a case that has repulsed the nation and triggered the biggest crisis of President Enrique Pena Nieto's administration.

The protests came a day after authorities said suspected Guerreros Unidos gang hitmen confessed to receiving the 43 students from local police, killing them, incinerating their bodies and dumping them in a river in Guerrero.

Authorities said they are still waiting for DNA results to confirm the identities of the remains.

But the apparent mass murder has shattered Pena Nieto's attempts to move Mexico's narrative away from years of drug violence and toward the economic reforms that has earned him international praise.

Despite the unrest, Pena Nieto left for China to attend an Asia-Pacific Economic Cooperation (APEC) summit before a two-day state visit in the country, with which he has sought closer ties.

He will then travel to Brisbane, Australia, for a G20 summit. The trip ends Saturday.

Amnesty International has criticized his decision to carry on with the trip, saying it "shows the lack of interest in confronting the grave human rights situation in Mexico."

Gang-linked police shot at busloads of students in the Guerrero city of Iguala on September 26, in a night of violence that left six people dead and the 43 missing.

The then handed the students to the Guerreros Unidos.

Prosecutors say the city's mayor, worried that the students would interrupt a speech by his wife, had ordered the police to confront them.

If the confessions are true, the mass murder would rank among the worst massacres in a drug war that has killed more than 80,000 people and left 22,000 others missing since 2006.

In Mexico City, protesters chanted "Pena Nieto out!" and "the people don't want you!"

A small group used metal barricades as battering rams in a failed attempt to break open the door of the palace, known for its majestic Diego Rivera mural.

They tossed Molotov cocktails at the door, which sparked a brief fire, and spray-painted the words "we want them back alive" on the 16th-century building.

Security forces later took back control of the door. Pena Nieto uses the palace for ceremonies and he lives in the Los Pinos residence in another part of the capital.

"We are tired of the government. We live with fear, injustice, death and pain," said Frida Vega, 18.

They also burned around 10 vehicles, including trucks and a federal police vehicle, and chanted "they

took them alive, we want them back alive" outside the building, which was partially torched in a protest over the case last month.

Relatives of the missing and fellow students at their teacher-training college near Chilpancingo refuse to believe the authorities until they get DNA results from independent Argentine forensic experts.

The students had traveled to Iguala to raise funds but hijacked four buses to return home, a common practice among the young men from a school known as a bastion of left-wing activism.

Authorities have arrested 74 people, including the ousted mayor, his wife, 36 police officers and several gang members.

Mexicans fed up with the unrelenting violence have rallied behind the Twitter trending topic #YaMeCanse, which can be translated to #I'veHadEnough or #I'mTired.

The words were uttered by Attorney General Jesus Murillo Karam to signal the end of his hour-long press conference on Friday announcing the suspected massacre.