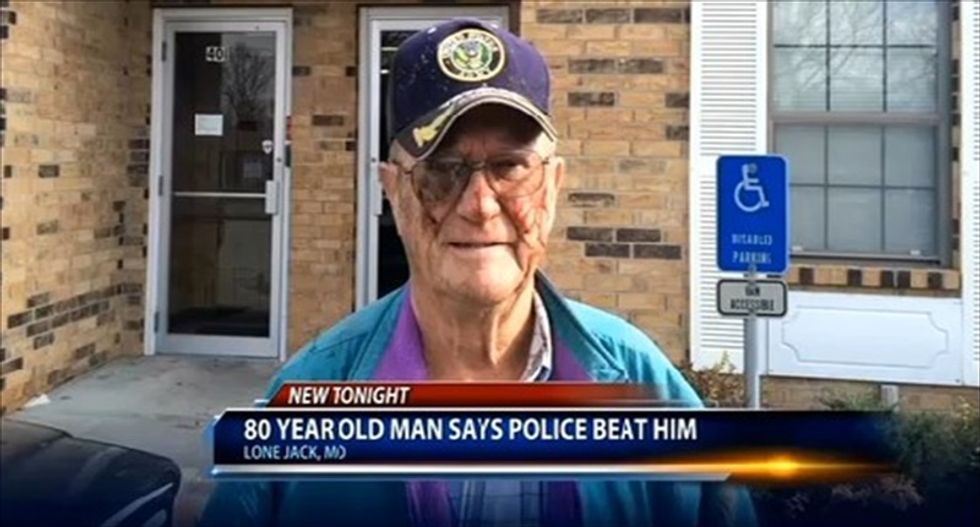 An 80-year-old Missouri veteran and his family accused local police of pulling him off of his tractor, attacking him and then charging him with assault, KCTV-TV reported.

Photographs show that Bill Swan was left with blood and bruises on his face and jacket after his encounter with authorities late last week. His wife, Libby Swan, said he also suffered a bruised hip and two broken ribs, and that she is fearful of another run-in with Lone Jack police.

"I'm afraid for us to even drive out of our driveway or to get on the street," she told KCTV. "I don't know what they will do."

Police Chief William Forbes said in a statement that officers were called his home after Bill Swan got into a dispute with public works employees repairing utility lines. Forbes said Swan, who was sitting on the tractor, threatened to sue the workers and accused them of being on his property.

"He first tried to back into their police car," Forbes said of Swan. "Then, he tried to leave the scene. The officers gave him verbal and hand signs to stop. He refused to do so, turned his tractor around, and tried to run over the officers. One of the officers was able to get on the tractor and shut it off."

Swan then allegedly swung at police and reached for one officer's gun, Forbes said, prompting a "scuffle" that left Swan with a cut on his head. After refusing medical treatment, Swan was arrested and charged with assaulting a police officer, disorderly conduct and resisting arrest.

But relatives say Swan likely did not hear the officers' commands, because his hearing is severely limited. They also rejected Forbes' account of the incident.

"It makes me worried," Swan's grandson, Tim Swan, told WDAF-TV. "Police officers are supposed to serve and protect, and instead they're going after people that pay their taxes, that do the right things, and are law-abiding citizens, and they're picking on the small guy."