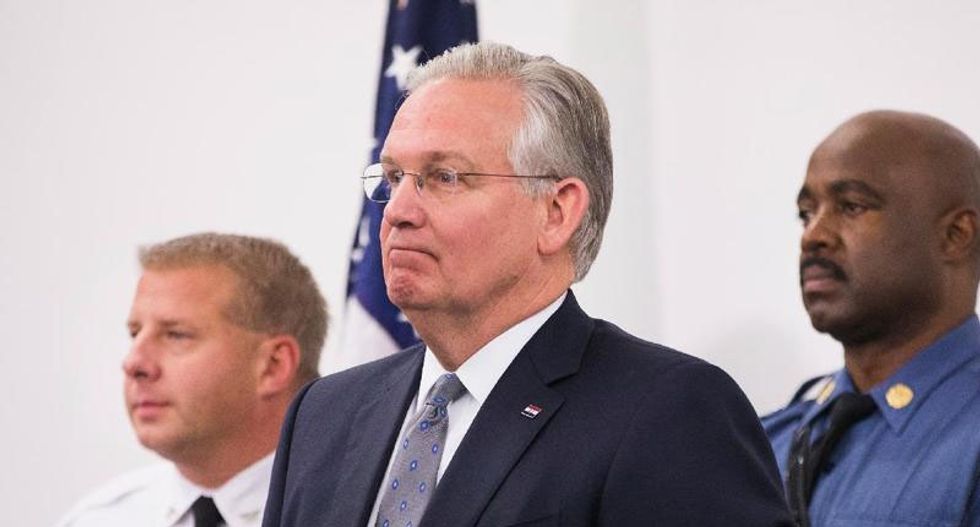 Missouri Gov. Jay Nixon (D) appeared to strain when asked if he was ultimately responsible for how police address possible future demonstrations in Ferguson, according to audio posted by The Guardian on Monday evening.

The audio was taken from a press conference Nixon held discussing the state of emergency he instituted earlier in the day. The move comes amid the wait for a grand jury's decision on whether or not to indict Ferguson police officer Darren Wilson. Wilson shot and killed 18-year-old Michael Brown on Aug. 9, spurring protests both in the city and around the country.

"Given that you've declared the state of emergency and you've put the Highway Patrol on the unified command, does the buck ultimately stop with you when it comes to how many protests are policed?" Huffington Post reporter Matthew Sledge asked.

"It, uh, our goal here is to keep the peace, and allow folks' voices to be heard," Nixon said. "And in that balance, I'm attempting, you know, I am using the resources we have to marshal to be predictable for both those pillars. I just will have to say, I don't spend a tremendous amount of time personalising this vis-a-vis me. I'm trying to make sure that we move forward in a predictable, peaceful manner that plans for all contingencies that might occur, so that people of a disparate group of opinions and actions can be heard while the same time, the property and persons in the St. Louis region are protected. I prefer not to be a commentator on it. I make the decisions, you know, to make sure that we're prepared for all contingencies."

"Is there any one official or agency ultimately in charge here in terms of response?" Sledge asked.

"Clearly, I ... I feel good about the, we worked hard to established unified command, to outline responsibilities," Nixon told him. "And now, with the additional assets provided by my order today of the Missouri National Guard, we've worked through a number of operational issues that the folks had. I'll only say that our efforts today are on top of ... a lot of things have been done the last 100 days to make sure we're prepared for any contingency."

Nixon's executive order instituted a 30-day state of emergency for the city, citing "the possibility of expanded unrest."

ABC News reported that law enforcement agencies around the U.S. have been warned by the FBI to prepare for the possibility that, should the grand jury decide not to indict Wilson, "extremist" groups may use peaceful demonstrations as an excuse to levy "threats and attacks against law enforcement and critical infrastructure."

Critics have accused Nixon of fostering tension between authorities and demonstrators by warning them not to commit violence during protests following the grand jury's decision, despite several reported instances of police behaving aggressively against both residents and journalists during demonstrations earlier this year.

State Sen. Maria Chappelle-Nadal (D) responded to Nixon's announcement concerning the state of emergency by sending a letter to President Barack Obama asking for any National Guard units deployed to Ferguson to be placed under federal control, instead.

"Thus far the state of Missouri has proven ill-equipped to handle this explosive and tragic situation," she wrote. "With the state-controlled National Guard on the way, I am concerned about the potential for an incident similar to Kent State occurring, only worse."

Listen to the audio, as posted on Monday, below.