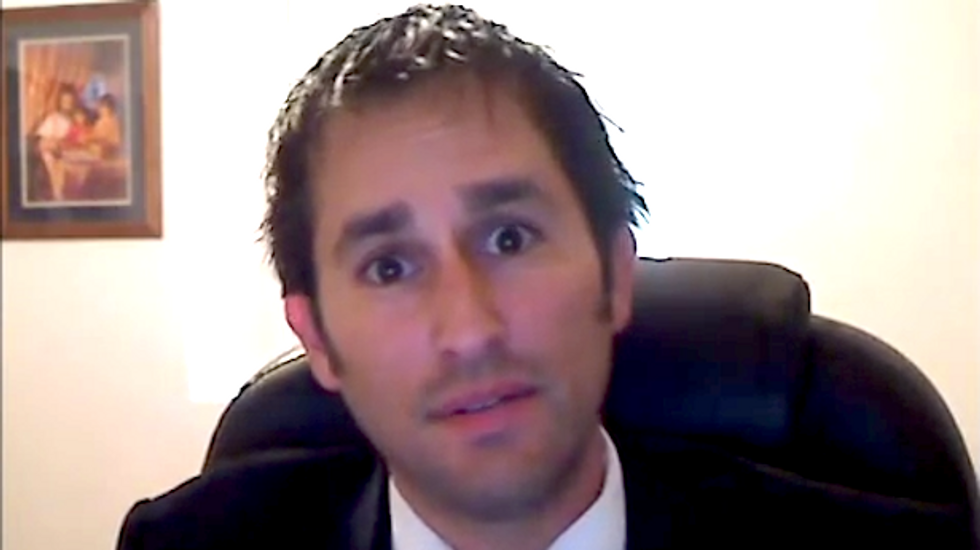 A long-shot Nevada candidate who dared the president to put him on his “kill list” claims his gubernatorial bid was denied by election fraud.

David Lory VanDerBeek, an Independent American Party candidate, said Wednesday that he was officially “permitted” to receive 14,548 votes – or 2.66 percent of the total – despite a poll conducted before the primary election that found his support at 13 percent.

The family therapist previously ran for U.S. Senate in 2012, when he received 49,000 votes as “a complete unknown,” but he’s suspicious that his vote total dropped despite raising his profile since then.

“I have campaigned steadily since December 2012 for two years in this race with a website, a TV show, social media, many interviews and supporters and my vote total went DOWN by 70 percent!” VanDerBeek posted on his blog.

VanDerBeek is probably best known nationally for his ties to Jerad and Amanda Miller, who moved from Indiana to Nevada to support his candidacy before making their way to the Bundy ranch standoff.

The couple gunned down two Las Vegas police officers in June before dying in an ensuing shootout, but the candidate claimed he hadn’t heard from them in several months prior to the shootings.

VanDerBeek has also become known for his “debate” against a cardboard cutout of Gov. Brian Sandoval that was frequently interrupted by chickens and his lengthy videos expressing doubts about the Sandy Hook massacre and other conspiracy theories.

Nearly all of his campaign staff abruptly quit in September, saying VanDerBeek was more interested in promoting the book he recently published, “Guerilla Politician,” than campaigning for office.

He said it would cost him at least $20,000 to challenge the results of the election, which he claims was rigged by “the establishment” to give his votes to Sandoval.

“They knew how unhappy the American people were with the Democrats in power, so they simply threw some switches and had the voting machines spit out a bunch of Republican wins and this is intended to comfort the people and soothe their growing rage,” he said.

VanDerBeek said he didn’t have the money to challenge the results, and the mainstream parties knew that, but he said the loss came as something of a relief.

“Actually, I am grateful to God for the results, because the day is coming when the people who were elected through fraud will have to face the wrath of the people and frankly it will be a blessing not to be in office,” he said.

Even so, VanDerBeek intends to challenge Sen. Harry Reid (D-NV) in the 2016 election.

“I have the backing of my party leadership,” he told The Raw Story last month. “I’m not going anywhere. You’ll continue to hear about David Lory VanDerBeek for years to come. I will hold high office in Nevada eventually.”