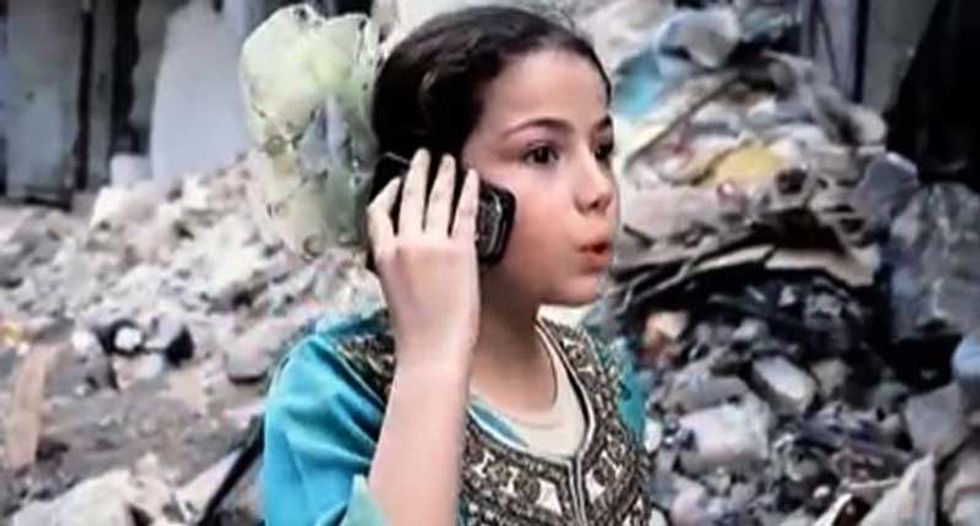 A nine-year-old girl has become the star of a YouTube comedy that depicts with bittersweet humour the harsh reality of everyday life in rebel-held areas of Syria's Aleppo.

Rasha plays the role of "Umm Abdo al-Halabiya", a housewife who must make do in a city devastated by more than three years of violence, despite daily bombings and severe shortages.

The 30-episode eponymous show, shot on location in the city which was once Syria's economic hub, stars only children playing adult roles and has been viewed by tens of thousands of Internet users.

Umm Abdo rants against President Bashar al-Assad, takes swipes at insurgents who have been trying to oust him and also mocks Syria's often overbearing social norms.

Despite her young age, little Rasha oozes irony, the trademark of Syrian comedy as she perfectly imitates traditional Syrian women who feed and thrive on gossip.

The chubby-faced, brown-haired actress is cast with other children who play fighters, housewives and neighbours caught up in a conflict that has changed their lives.

The script is resolutely anti-regime and the show is the first of its kind to give a bold insight into life in rebel-held areas of Aleppo.

In one episode, Umm Abdo, wearing her traditional dishdasha (robe) is chatting on the telephone with her sister, who lives in a regime-held neighbourhood of Aleppo where water cuts have become a fact of life.

"Do you also wash your clothes by hand?" she asks, before adding: "And I thought you loyalists were spoiled!".

In another episode, she welcomes into her home two women dressed in black niqabs, one of whom is looking for a bride for her son, a rebel fighter.

Umm Abdo is known in the neighbourhood as one who would marry off her daughters only to "thuwar" - revolutionary fighters.

In a voice beaming with pride she tells her visitors "all my sons-in-law are members of the (rebel) Free Syrian Army".

"Perfect," says the mother of the hopeful groom. "My son is an ace at firing a douchka," she adds, referring to the Soviet-era machinegun that is widespread in Syria.

But the deal is not done and the women leave as Umm Abdo sets out her demands -- a dowry in dollars or in gold.

Series director Bashar Hadi told AFP he chose to make a comic show about the tragic everyday life in Aleppo because "humour goes straight to the heart".

The show, he said, "aims at breaking our people's sadness, and to make people smile" despite a war that has killed more than 180,000 people.

Aleppo has been divided into government and rebel areas ever since a major offensive by insurgents in July 2012.

Hadi, who is based in a rebel-held area of the city, said he decided to cast children to better illustrate the "suffering" of the Syrian people to "rebels, loyalists, Arabs and Europeans alike".

Rasha, he said, "represents a generation of children caught up in war, but who have become a symbol of resistance".

Shooting the series was plagued with danger.

"Several times, shells would fall all around us, forcing us to postpone our shoots," Hadi said.

One scene tries to illustrate the danger by showing a regime helicopter launch a barrel bomb attack -- like real life attacks that have killed thousands in less that a year.

The crew of semi-professionals also had to rely on generators and car batteries to charge their cameras as they worked in areas of the city long deprived of electricity.

The show became a hit during the Muslim fasting month of Ramadan, and the team is now in talks to air it on Arab television channels.

But the series is not all laughs and there are some gripping moments, particularly when Umm Abdo walks through a cemetery for war "martyrs".

"I dream of a safe country, that the children will return to, and that we forget the word refugee," she says.

The moving monologue quickly turns into a statement of militancy as Umm Abdo vows to "avenge the children who sacrificed their youth to defeat oppression".

Watch video of the show below:

'You’ve got to follow a court order': GOP lawmaker admits colleagues must testify if called before Capitol riot committee

According to a report from the Washington Post, Democrats on the House select committee investigating the Jan 6th insurrection, that forced lawmakers to flee for their lives, are planning on issuing subpoenas very soon and are weighing which of their GOP counterparts they want to testify about their involvement or interactions with the president that day.

As the report notes, the Democrats are treading in uncharted territory that could be seen as partisan politics in their efforts to find out the truth, and any Republican called would likely not go down without a fight, with former House counsel Steve Brand stating, "I don't recall a case where members of Congress were subpoenaed to an oversight hearing."