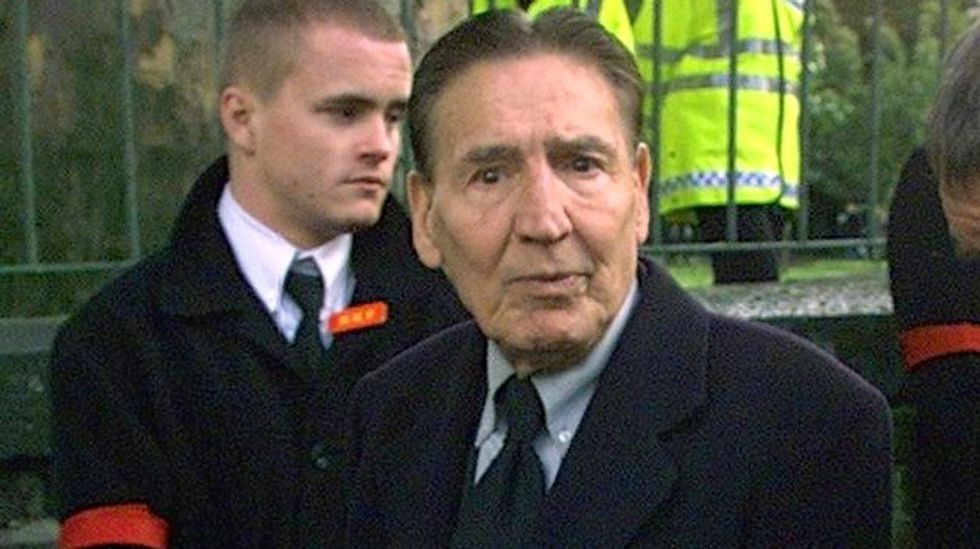 Infamous London gangster known as "Mad" Frankie Fraser dies in a hospital at the age of 90, a former associate says (AFP)

An infamous London gangster known as "Mad" Frankie Fraser has died in a hospital at the age of 90, a former associate said on Wednesday.

In his 1960s heyday, Fraser was known as an enforcer who inflicted violence on behalf of the two gangs that dominated London, the Kray twins and the Richardson brothers.

Eddie Richardson, who formed one half of the South London crime gang leadership, described Fraser as an "old acquaintance" as he confirmed his death.

Once known as Britain's most violent man, Fraser spent a total of 42 years in prison during his life for a range of offences.

Starting out as a child thief, Fraser's criminal career took off during World War Two when he escaped service as a soldier and took advantage of sparse policing and shortages.

"The war was wonderful, for thieving wise, gangster wise and everything," Fraser once wrote.

"Clothes were rationed, food was rationed, so all you had to do was nick them commodities and people bit your arm off to buy it off you."

His infamy grew with the "torture trial" of 1967 in which he was accused of pulling out the teeth of gang victims with pliers.

Once jailed, he was said to be a ringleader of a brutal riot in Parkhurst Prison in 1969.

Released in 1989, he became a minor celebrity and re-invented himself, giving tours of gangland London. He survived being shot in the head outside a nightclub in 1992.

Legends grew up about him. He was said to joke that he began life at a disadvantage because his parents were honest and he had to make his own way in the criminal world.

As he grew older he showed little sign of repenting of his past, blogging on his website to set the record straight about old murders and maimings he took part in.

In his late eighties he was sanctioned with an Asbo - an anti social behaviour order - after flying into a rage at a pensioner who sat in his chair in an old people's home, chasing him down a corridor.