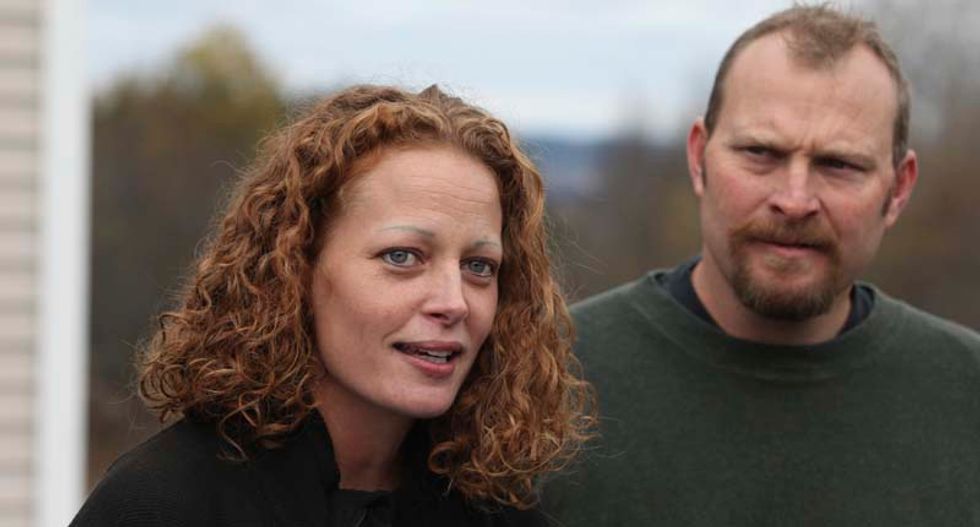 Nurse Kaci Hickox (L) joined by her boyfriend Ted Wilbur speak with the media outside of their home in Fort Kent, Maine October 31, 2014. REUTERS/Joel Page

(Reuters) - A nurse who treated Ebola patients in West Africa and publicly fought quarantine orders in New Jersey and Maine after returning to the United States last month has decided to move away from her home state, a newspaper in Maine reported.

Kaci Hickox and her boyfriend, Ted Wilbur, plan to leave Maine after Nov. 10, or the expiration of the monitoring period for the virus' 21-day incubation, according to the Press Herald newspaper.

Wilbur did not say where the couple planned to move. "We’re going to try to get our lives back on track," he told the newspaper on Friday.

Wilbur and Hickox could not immediately be reached for comment.

Hickox returned to the United States last month after treating Ebola patients in Sierra Leone and was quarantined in a tent outside a hospital in New Jersey for four days despite showing no symptoms.

After criticizing New Jersey Governor Chris Christie over the forced isolation, she was driven to her boyfriend's home in Fort Kent, in Maine's far north, where Governor Paul LePage ordered her quarantined even though she had tested negative for the virus.

She publicly defied the order, drawing national attention to the battle between states seeking to impose strict restrictions on healthcare workers returning after treating Ebola patients and the civil liberties of those individuals.

Last week, a judge ruled the isolation of Hickox was too stringent but ordered her to continue self-monitoring through Nov. 10.

Medical experts say Ebola can be transmitted only through the bodily fluid of a person who is exhibiting symptoms. The deadliest deadly outbreak of Ebola on record has killed nearly 5,000 people, mostly in Liberia, Guinea and Sierra Leone.

Tom Pelletier, Fort Kent’s chief of police, said he had received calls from people who wanted him to arrest Hickox, local media reported.

Wilbur told the Press Herald he has withdrawn from his nursing program at the University of Maine at Fort Kent because university officials were not doing enough to stop threats against him.

Dan Demeritt, spokesman for the University of Maine System, told the Press Herald the school "worked hard to balance the students' needs and the overall concerns of the campus and the community."

Neither Pelletier nor a representative of the University of Maine could immediately be reached.

(Reporting by Victoria Cavaliere in Seattle; editing by Matthew Lewis)