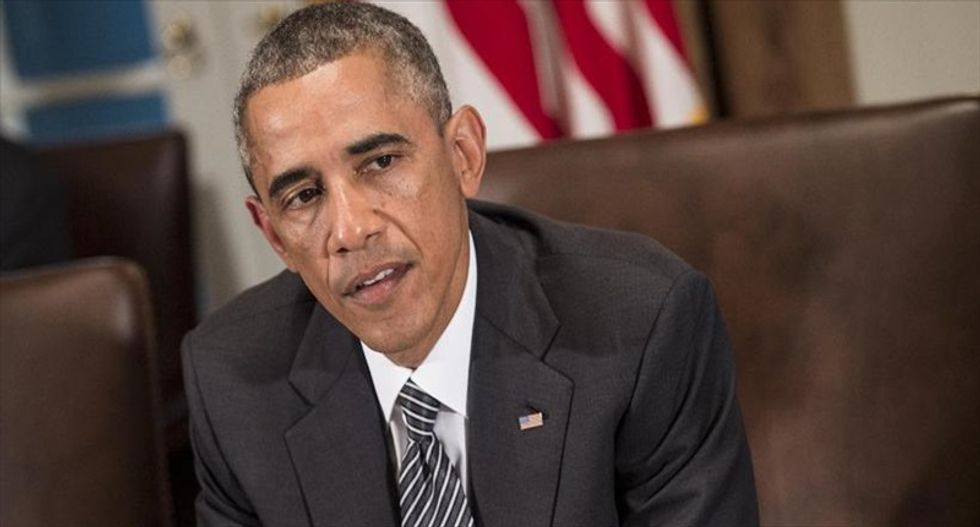 President Barack Obama on Friday unveiled plans to send 1,500 additional troops to Iraq to help Baghdad government forces strike back at Islamic State jihadists, roughly doubling the number of US soldiers in the country.

The move marked a deepening US commitment in the open-ended war against the IS group, three months since American aircraft launched air strikes against the Sunni extremists.

The move extends the US training and advising mission to new areas as Iraqi and Kurdish forces prime themselves to recapture ground lost to the IS group, including in the volatile Anbar province in the west where the Iraqi army has been on the retreat.

The reinforcements were "part of our strategy for strengthening partners on the ground" but the troops would have a "non-combat role," the White House said in a statement.

The United States already is carrying out air strikes against the IS group in Iraq and Syria but officials insisted the decision did not signal "mission creep" towards another all-out ground war.

"They will not be introduced into combat," a senior administration official told reporters.

The US forces will be carrying out the same mission that has been outlined from the start -- to help the Iraqi forces on the ground, the official said.

"The mission is not changing at all for our service members," the official said. "We are adding personnel to better carry out the mission."

The 1,500 troops will include roughly 600 advisors to help Iraqi forces plan operations and nearly 900 trainers who will be deployed across the country, as Washington steps up the pressure on IS militants who have grabbed large areas of Iraq and Syria in a brutal campaign marked by atrocities.

To fund the growing war effort, Obama also planned to request $5.6 billion from Congress, including $1.6 billion to train and arm the Iraqi forces, officials said.

The additional troops would not deploy until Congress approved the funding.

Republican Buck McKeon, chairman of the House Armed Services Committee, voiced doubts that the president was doing enough to counter the IS group and other extremists.

"I remain concerned that the president's strategy to defeat ISIL (IS) is insufficient," McKeon said.

Obama opted to send more troops after discussions with commanders -- including the officer running the air war, General Lloyd Austin -- and aides over the last several weeks, officials said.

Skeptics of Obama's strategy question if the Iraqi army can be salvaged as long as Sunni tribes feel alienated by the Shiite-led government in Baghdad.

But officials said they were hopeful a new Iraqi defense minister would reinvigorate the army, which virtually collapsed earlier this year against the onslaught of the IS group.

"One of the reasons why we think this is a good idea right now is because the Iraq security forces have stiffened their spine and have gone on the offense," Pentagon spokesman Rear Admiral John Kirby said.

The US training will focus on 12 Iraqi brigades -- nine army and three Kurdish Peshmerga brigades -- with at least four training sites located in northern, western and southern Iraq.

Sunni tribes eventually would be trained as well and officials suggested the Shiite-led Baghdad government was moving to arm the Sunnis in Anbar.

Other countries in the anti-IS coalition would also send up to 700 troops to help train and advise the Iraqi forces.

Denmark's defense minister committed to provide 120 trainers on Friday in talks at the Pentagon, Kirby said.

There are now about 1,400 American troops in Iraq, including 600 advisors in Baghdad and Arbil, and 800 troops providing security for the US embassy in the capital and the Baghdad airport.

Obama had previously authorized up to 1,600 troops in Iraq and his decision Friday will raise the maximum troop footprint to 3,100.

US officials would not rule out sending more troops beyond those announced, but said the prohibition against combat would remain in place.

Obama had resisted keeping troops in Iraq earlier in his term, vowing to end the American presence that began with the 2003 invasion and continued as an occupation through 2011.

Officials had weighed keeping several thousand troops in Iraq after 2011, but talks with the Iraqi government, then led by prime minister Nuri al-Maliki, broke down over the issue of legal immunity, which Washington insisted on and Baghdad declined to provide.

With Friday's announcement, Obama will be deploying a force to Iraq along the lines of that considered in 2011, under legal protections similar to those it rejected as insufficient three years ago.