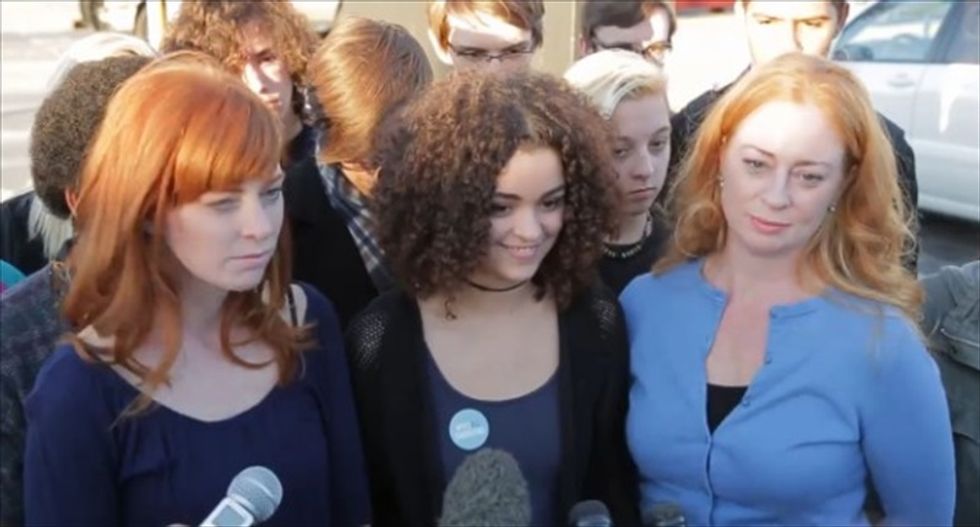 (L-R) Kim Wright, Danielle Brown, middle, and Stacey Wright give a statement about a Nov. 24 student protest. [The Daily Oklahoman]

Students at Norman High School in Oklahoma are set to walk out on school on Monday to protest what they described as a lack of response by school administrators to concerns from three alleged rape victims who were harassed into leaving school, the Daily Oklahoman reported.

"We hope that our effort shines the spotlight on bullying, and that Norman High can take steps to make sure that victims can go to school safely," sophomore Danielle Brown said at a press conference on Thursday.

The demonstration is scheduled to begin at 9:20 a.m. local time on Monday. The protesters, who have begun a campaign called YES ALL Daughters online, will also reportedly present a list of demands to Principal Scott Beck that day.

The three girls were reportedly all raped by the same 18-year-old male student in separate incidents, two of them a week apart this past September. Two of the victims were 16 years old at the time they were attacked, while another victim was 14 years old. Local police said they are investigating the incidents.

Jezebel reported that the suspect, a senior, was suspended for disseminating a video of himself raping one of the girls. In another video, he described one of the attacks.

The video was recorded by another male student, who said the suspect went to his house "drunk" the day after assaulting the girl, one of the 16-year-old victims, at a party on Sept. 19.

"I knew right off the bat it wasn't cool," the student told Jezebel. "Like, that's not cool to do. I don't care if you are my buddy, honestly, that's some heinous stuff to do somebody. What bothered me the most is he thought it was funny."

The student later shared the recording with the victim in that incident, who in turn shared it with school officials. But the victim herself received a three-day suspension, her mother said, for swinging a book bag at another male student who verbally harassed her about the attack. One administrator reportedly told the victim and her mother that she should stay home from school until the following semester.

"I've never dealt with this," the victim's mother said. "I didn't know I could fight this and get rid of the bully instead of my daughter. I guess they just thought we'd take it laying down."

The 14-year-old victim told Jezebel that she met the suspect not long after his encounter with the victim referenced in the recording. She said he drugged her before taking her to his home, where he assaulted her before taking her to a friend's house. This victim said that a school administrator admonished her for her behavior while reporting the incident alongside her mother.

"Your daughter didn't do anything she said she did last night," the unidentified administrator allegedly said. "She didn't go to church. She went off, did drugs, got into a car with boys."

This victim also told Jezebel that she was harassed by other while attempting to continue her studies, both at Norman High and another school, Norman North High. She no longer attends school.

"Nobody likes me anywhere anymore," the girl said. "I can't do it."

Beck sent a letter to parents on Nov. 18 saying the school would allow the demonstration to take place and acknowledging that one rape did take place off-campus, and that it "took the strongest disciplinary action" allowed under state law, while also cooperating with the police investigation.

A spokesperson for the Norman Public School District, Shelly Hickman, told Jezebel that the school did not address the victims' concerns.

"We categorically deny we suspended alleged victims for being victims or are preventing a victim from attending school," Hickman said. "Any time a student is suspended, signed paperwork is given to their parent and/or guardian. Moreover, it is illegal to arbitrarily prevent a student from attending school in the absence of a suspension, and suspensions by a school can be challenged by a parent before the superintendent and Board of Education if parents/guardians believe it was unjust. We also categorically deny we knowingly ignore, condone and fail to respond to bullying when we are aware it has occurred or receive complaints that it has occurred."

The protest was organized after two of the victims shared their stories with a local knitting circle. Brown said on Thursday that all three of them are still "struggling" in the wake of the attacks and want to return to school.

Watch footage from the press conference, as posted by the Oklahoman, below.