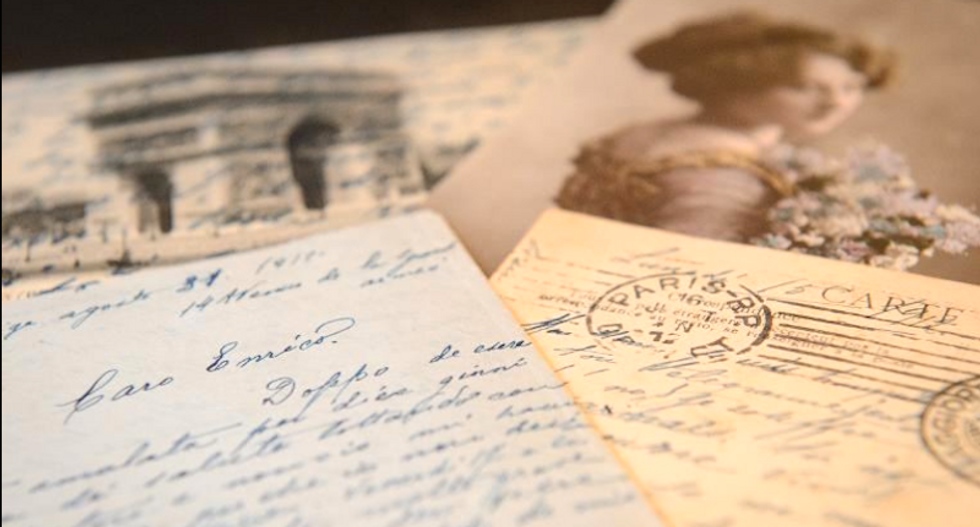 A selection of handwritten letters and postcards written to Italian tenor Enrico Caruso are pictured at Christie's auction house in London, on November 6, 2014 (AFP)

The passionate love letters of the great Italian tenor Enrico Caruso, which shed light on his complicated love life, have been revealed ahead of an auction in London.

Including material right up to his death in 1921 at the age of 48, the archive comprises 22 letters and postcards, seven telegrams and cache of photographs of his mysterious Argentinian lover Vina Velasquez.

Her correspondence is written in Italian, Spanish and French, and sometimes all three in the same letter.

"A thousand strong kisses on your beloved mouth from little Vina, who is putting her voluptuous lips everywhere. I want you all for me," she wrote in one.

According to an article in The Washington Times from July 28, 1912, Velasquez was "rather stout, and has a peculiar type of Spanish beauty, pleasing but not extraordinary" -- a description matching the pictures in Caruso's archive.

The article, datelined Paris, announced their engagement, but the pair never married.

"At this period he seemed to constantly get into situations where he had proposed to people, or they thought he had proposed them, but then he didn't go (ahead) with the marriage," Thomas Venning, the head of the books and manuscripts department at Christie's, told AFP.

"There were at least two occasions in which he was sued because he had proposed marriage and he didn't marry."

Most of the Velasquez letters have French stamps on and the article said she lived near the Arc de Triomphe in Paris.

It said she was the daughter of a late friend of Caruso's, a Mr. De Taz, but does not say how old she was.

"My darling, my treasure, it is 11 o'clock at night and I cannot sleep without writing to you," Velasquez writes in one letter.

In another she is critical of Italian soprano Ada Giachetti, who bore Caruso four children during their 11 years together.

Only two children survived infancy and he did not maintain contact with them.

Letters to Giachetti and her sister Rina -- with whom Caruso had an affair lasting four years -- are also in the archive.

Caruso eventually married the U.S. socialite Dorothy Park Benjamin, with whom he had a daughter.

But he chose to leave his correspondence with his friend and early patron Antonino Perrone fu Antonio, who lived in Boston, likely because of its scandalous nature.

"A lot of the content of the correspondence was about his relationships with different women," said Venning.

Cannot explain his own voice

Caruso's career coincided with the birth and popularity of phonograph records, which gave him a global fame that no opera star had enjoyed before.

He performed in the world's greatest opera houses, from Europe to North and South America, including many seasons at the Metropolitan in New York.

But his letters to Ada Giachetti reveal early bouts of pre-performance nerves among the passionate declarations and domestic concerns about the children and their house.

He describes how "Rigoletto" in 1900 "scares me to death", while sometimes his voice defies his own explanation.

"I myself cannot explain the way in which I sang. I was calm, my voice steady, a great spontaneity, and I sang as if I was speaking," he wrote in 1903.

He records his critical 1897 Milan debut as "victory achieved in every way... the whole theatre rose in applause... in short, my future is secured."

Listen to Caruso perform in 1913 in this video posted online by Tom Frøkjær: