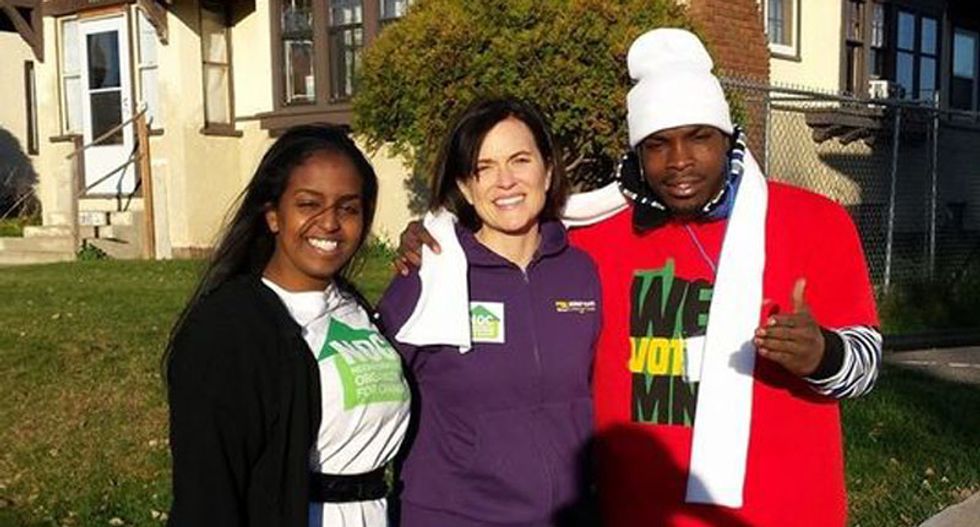 Minneapolis police officials still smarting over the ridicule heaped upon them over #pointergate last week, took another blast today from the subject of their ridiculous accusation: Mayor Betsy Hodges.

Writing on her blog about the incident, where police officials -- including the police union head John Delmonico -- claimed she was "flashing" gang signs with a local gang member while out canvassing for votes, Hodges ridiculed the police while questioning their motives.

Police officials have already taken a beating in the national media, with Daily Show host Jon Stewart giving the officials a 'one finger salute,' however Hodges had held her fire until now.

On her blog, the mayor admitted that the photo-op with a volunteer was "awkward," before questioning police officials assertions that allowing the picture to be taken while she and the volunteer pointed at each was "poor judgment on my part," with Delmonico asking, “Is she on the side of the cops or the gangs?”

Asking, "what the head of the police union thinks I should do, or not do," Hodges laid out four options.

"First, maybe the head of the police union would like me to stop pointing altogether for the safety of the community. If that were truly his concern, that my pointing constitutes gang activity, then his outrage would have been sparked long, long ago," she wrote, before adding " Lots of people point. The President. Bill Clinton. Stephen Colbert. Babies. It is the earliest form of human communication. I’m not going to stop pointing."

The third option, she said, was "the head of the police union doesn’t want me standing next to young African American men."

"One frightening implication of the KSTP story and police union President Delmonico’s support of that story is their implicit assumption that I should use stereotypes to assess with whom I should or should not meet or stand or talk," Hodges wrote. "As The Onion once satirically wrote, 'Stereotypes are a real time saver.' It is not a good basis for decision-making, however."

Hodges went on to suggest the real reason the police objected to the picture was " ... the head of the police union wants me to stop working to raise the standards of police culture and accountability," and wanted to use the hyped-up story to discredit her.

"I share the public’s speculation that this is the real option," she wrote. "If that is the case, he has failed on two levels. First, the people of the internet have called out this story over and over with outrage and humor, shining the light of day on the ridiculous premise on which it was based."

"I am undaunted in my desire to support and develop police officers who serve respectfully and collaboratively every day to keep people safe and make all our neighborhoods stronger. I am undaunted in my plans to increase accountability for consistent bad actors in the police department."

Hodges went on to state that she didn't think this would be the last time the police union would attempt to undermine her.

"If the fourth option is correct, my commitment to this work means that the head of the police union or other detractors will pitch more stories that attempt to defame that work and its leaders to various media outlets. So be it," she concluded.