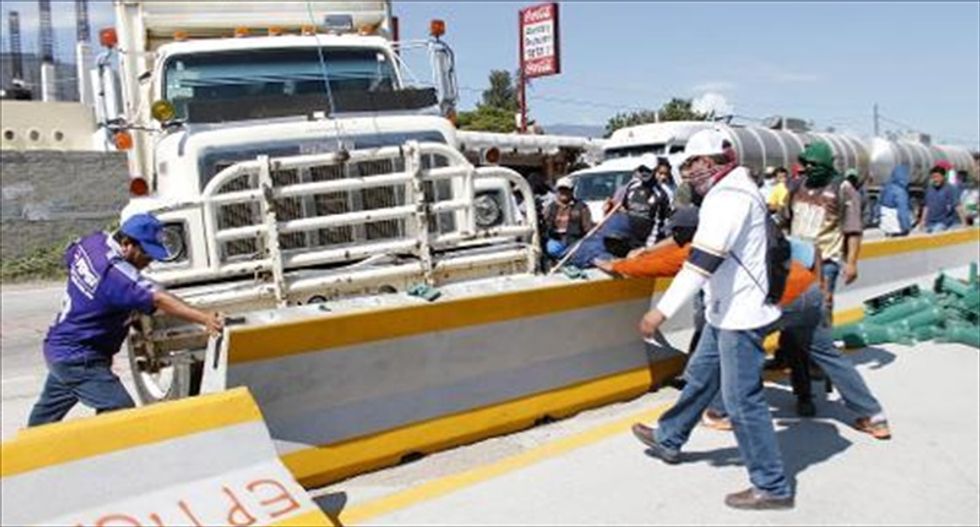 Protesters block a highway near Acapulco, Guerrero in Mexico calling for the return of 43 missing students [AFP]

Rocked by a mayor's role in the presumed killing of 43 students, Mexico's main left-wing party is facing more turmoil after its founder quit amid a dispute with the leadership.

Cuauhtemoc Cardenas, a three-time presidential candidate, announced he was leaving the Democratic Revolution Party (PRD) on Tuesday, leaving the opposition without one of its most influential voices.

While Cardenas no longer held a top post, his departure leaves a big hole in the PRD, which has already lost another former presidential contender, Andres Manuel Lopez Obrador, who left in 2012 to form a new party.

Cardenas is the son of a beloved former president, Lazaro Cardenas, who is widely admired in Mexico for his nationalization of the oil industry in 1938.

In a letter to his party, the 80-year-old politician and former Mexico City mayor said he decided to "take other paths" because "other interests have prevailed in the party."

The PRD is the party of former Iguala mayor Jose Luis Abarca, who is accused of ordering police to attack a group of students on September 26 over fears they would disrupt a speech by his wife.

Prosecutors say the officers grabbed 43 students and handed them to the Guerreros Unidos drug gang, whose members confessed to killing the young men and incinerating their bodies.

The city is in the violence-plagued southern state of Guerrero, whose governorship has been held by the PRD since 2005.

But Angel Aguirre resigned as governor last month amid violent protests by students who believe their colleagues are still alive and want authorities to find them.

Erubiel Tirado, political analyst at the Iberoamerican University, said Cardenas' departure is "a debacle for the PRD because it deals the final blow to the partisan left."

"He was an emblematic figure who was showing signs of exhaustion over the corruption and patronage system in the party," Tirado told AFP.

Cardenas founded the PRD in 1989, one year after he lost the presidential election to Carlos Salinas, of the long-ruling Institutional Revolutionary Party (PRI), in a vote many denounced as fraudulent.

Last week, Cardenas called for the resignation of PRD president Carlos Navarrete, who won an inner-party election in early October, when the Iguala crisis began to boil.

Navarrete said Cardenas' resignation "closes a phase of powerful men in the PRD, and now begins the phase of groups."

Since the Iguala tragedy, Navarrete has admitted that the party had committed "errors" and announced a plan to vet future political candidates to weed out the corrupt ahead of 2015 mid-term elections.

But the party was battling problems before Iguala.

Some members were uncomfortable when the PRD joined the ruling PRI and the conservative National Action Party (PAN) in a "Pact for Mexico," which led to the passage of sweeping reforms pushed by President Enrique Peña Nieto.

The dominant faction is the New Left, a group known for its pragmatism to win votes dubbed "Los Chuchos" -- the nickname of its leader, Jesus Ortega.

"With Cardenas' departure, the winners are those who broke up the partisan system -- Los Chuchos. The sections that wanted a political renewal are now orphans," Tirado said.

The biggest shock, however, came after Lopez Obrador left the PRD to form the Morena party.

Lopez Obrador lost to conservative candidate Felipe Calderon in a razor-thin election in 2006. He was defeated by Pena Nieto in 2012, refusing to concede after claiming fraud.

The departure of Cardenas "is a symbolic closure because the real wound" was when Lopez Obrador left the PRD, said Nicolas Loza, political expert at the Latin American Social Sciences Faculty.

While the PRD is in trouble, it is not alone.

Protesters angry at the Iguala case have voiced frustration with all of the country's scandal-plagued political parties.