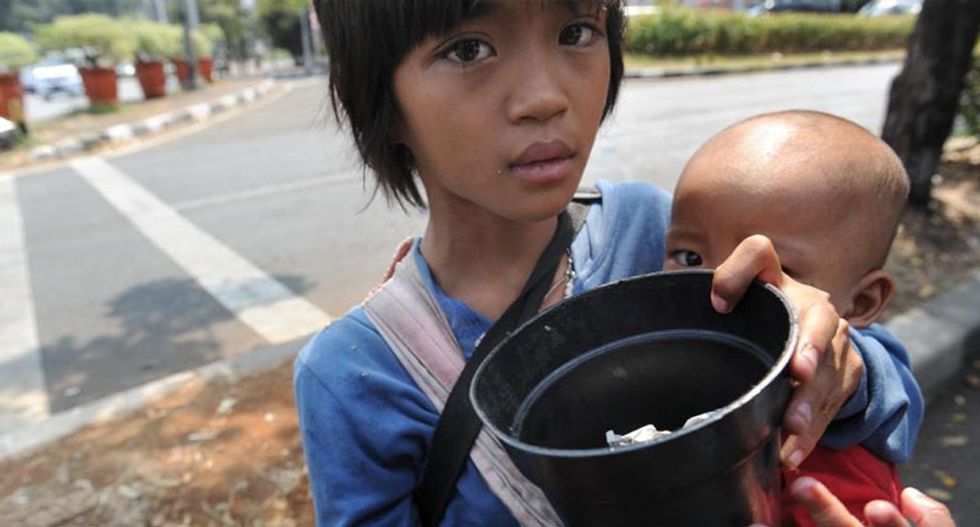 An Indonesian youth begs for money from passing motorists near a mosque in Jakarta, on August 19, 2012 (AFP Photo/Romeo Gacad)

Pope Francis has called on G20 leaders not to forget the poor, saying to do so would be "regrettable" as the heads of the world's most powerful economies prepare to meet in Australia.

The Group of 20 leaders are expected to sign off in Brisbane this weekend on a pledge to boost the level of their combined economic output by at least two percent above the currently projected level in the next five years, creating millions of jobs.

In a letter to Australian Prime Minister Tony Abbott, who holds the G20's rotating presidency, the pope said world powers "must not forget that many lives are at stake behind these political and technical discussions".

"And it would indeed be regrettable if such discussions were to remain purely on the level of declarations of principle," he said in the letter, sent on November 6 but only made public on Wednesday.

"There are far too many women and men suffering from severe malnutrition, a rise in the number of the unemployed, an extremely high percentage of young people without work and an increase in social exclusion which can lead to criminal activity and even the recruitment of terrorists."

He said he hoped the talks would mark a step towards "eliminating the root causes of terrorism, which has reached proportions hitherto unimaginable; these include poverty, underdevelopment and exclusion".

"It has become more and more evident that the solution to this grave problem cannot be a purely military one, but must also focus on those who in one way or another encourage terrorist groups through political support."

The pontiff added that he hoped to see "a substantial and productive consensus" on boosting growth and jobs that took into account "real improvements in the living conditions of poorer families and the reduction of all forms of unacceptable inequality".

Each country is expected to submit its detailed reform plans to achieve the growth goal in Brisbane, with an emphasis on private sector financing to spur infrastructure investment.

The comments came as a report by the C20 group -- a platform for dialogue between G20 leaders and civil society organisations -- said merely aiming for stronger growth was not enough, it must also reduce inequality.

"Australia’s G20 will go down in history for making a billion more people better off, so long as the summit’s leaders stick to their guns and ensure an inclusive growth target benefits the poorest households," said report co-author Melissa Wells, from Save the Children.

In his letter, the pope also warned about the impact on the environment of "unbridled consumerism" while speaking of the "unbearable humanitarian situations around the world", pointing to the Middle East.

"I take this opportunity to ask the G20 member states to be examples of generosity and solidarity in meeting the many needs of the victims of these conflicts, and especially of refugees," he said.

"The situation in the Middle East has revived debate about the responsibility of the international community to protect individuals and peoples from extreme attacks on human rights and a total disregard for humanitarian law."

Pope Francis emphasised the need to protect people from abuses in the financial system, referring to the transactions that led to the global recession in 2008 as a "less evident but equally real and serious" form of aggression against human rights.

"Responsibility for the poor and the marginalised must therefore be an essential element of any political decision, whether on the national or the international level," he said.