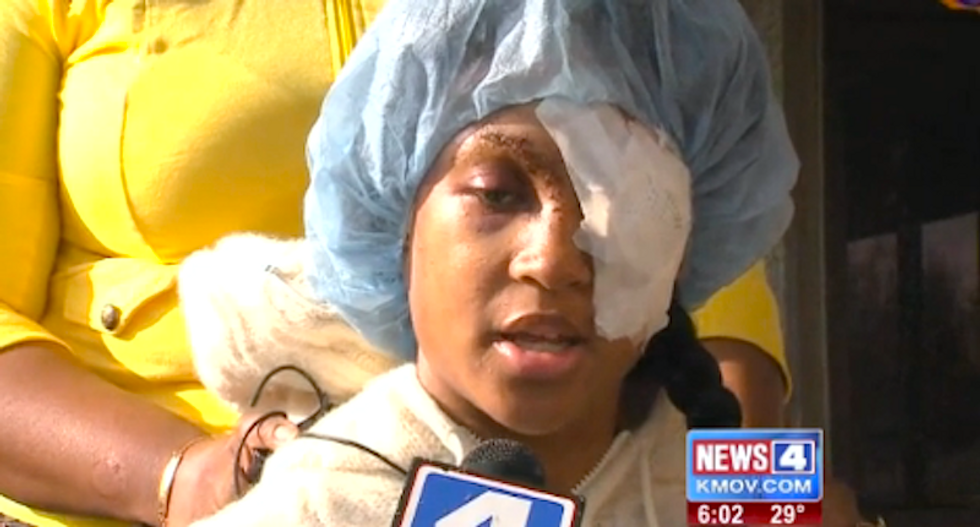 A pregnant St. Louis woman lost her left eye after police shot her in the face with a beanbag hours after prosecutors announced that Officer Darren Wilson would not be charged.

Dornnella Conners said she and her boyfriend, Deangelis Lee, drove into Ferguson early Tuesday to show support for Michael Brown, who was gunned down Aug. 9 by the officer.

They pulled into a BP parking lot where a crowd had gathered, and police moved in to clear the area after reports of gunfire near the gas station.

They arrested 16 people near the BP station.

Conners said she and her boyfriend tried to drive away, but she said officers blocked them in from the front and the back.

St. Louis County police said Lee drove straight at them, and an officer said he fired a non-lethal weapon in an attempt to stop the car.

The beanbag shattered the passenger-side window and struck Conner in the face.

"I understand they have a tough job, and I understand it was chaos, but there was no reason to fire upon an innocent person sitting in a vehicle," said her father, Donnell Conners.

Doctors were unable to save her left eye, and Conners said her vision is blurry in the right eye.

“My sister can now only see one side of things – literally,” said her sister, Tikal Goldie.

Police have issued an arrest warrant for Lee in connection with the incident.