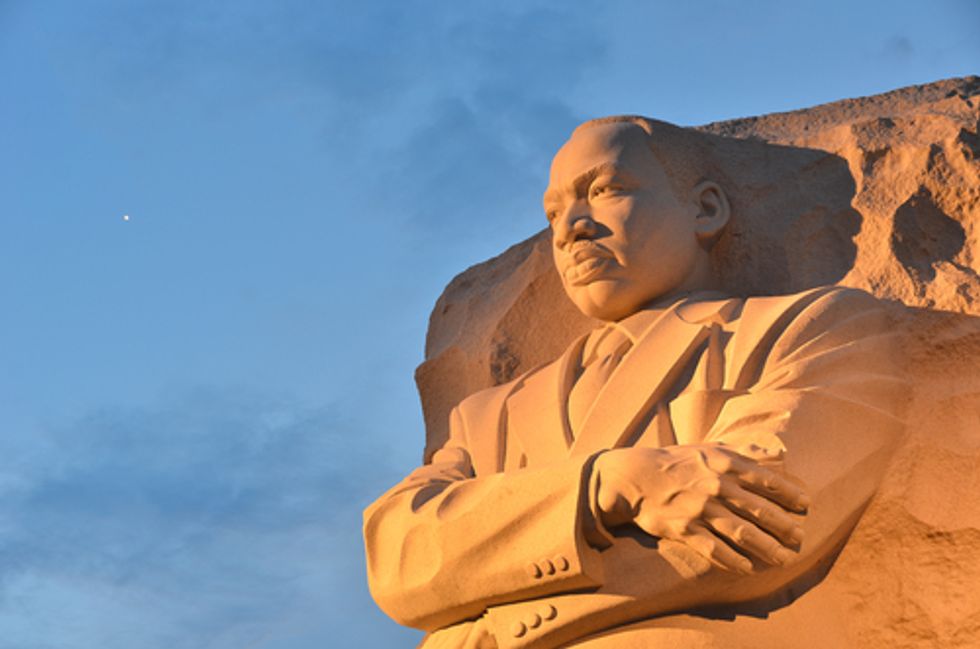 Beverly Gage is a Yale University professor who finds ways to tell us about our present by looking at the past. She is married to a friend of mine, Dan Perkins, who is better known as the cartoonist Tom Tomorrow.

In her first book, Gage re-examined a somewhat forgotten episode of New York history -- a 1920 bombing of Wall Street that had eery echoes for the terrorist attacks that hit the city 81 years later.

Now, she's working on a book about J. Edgar Hoover, and as she was poring over documents at the National Archives about the former FBI Director, she ran across something of an American history Holy Grail.

It was an uncensored copy of a letter that was sent to the Rev. Dr. Martin Luther King Jr. in November 1964, just as he was about to become the youngest ever recipient of the Nobel Peace Prize.

In her piece about the letter in the New York Times Magazine this morning, Gage explains that since 1961, King had been on a collision course with Hoover, who had started out investigating a former member of the Communist Party in King's inner circle, which led to an investigation of King himself. King, meanwhile, denounced the FBI's practices in the South, "accusing Hoover of failing to enforce civil rights law and of indulging the racist practices of Southern policemen."

Through the use of wiretaps, Hoover discovered what was an open secret within the leadership of the civil rights movement, that King engaged in extramarital affairs. Hoover decided to use it to try to destroy King just as he was reaching his greatest effectiveness as a national and world figure.

Apparently hoping to derail King's acceptance of the Nobel Prize, Hoover had one of his deputies, William Sullivan, write a smear letter to King, and sent it along with, the letter suggests, a recording of some kind, now lost.

King left for Norway before the letter arrived. "It was King’s wife, Coretta, who first opened it, expecting to find a recording of one of her husband’s speeches. She turned the contents over to King, who assembled a group of confidants to sort out a response. As King’s closest friends and associates recalled, everyone immediately agreed the letter could only be the work of one institution: Hoover’s F.B.I.," Gage writes.

Gage tells us that portions of the letter have been in the public domain for many years, but this is the first time that the entire, uncensored letter has been released. (The Times redacted only one thing, the name of a woman, because it "could not verify or disprove the claims about her.")

And she says scholars argue over what the letter expected King to do. Was it trying to convince him to commit suicide? "Even now, looking at a full copy of the letter, it’s tough to puzzle out just what the bureau wanted King to do," Gage says.

Whatever the effect it was going for, today, Gage says, the letter "has occupied a unique place in the history of American intelligence — the most notorious and embarrassing example of Hoover’s F.B.I. run amok."

And Gage points out that today, perhaps more than ever, we're still dealing with questions about how much power our intelligence agencies should have to pry into the private lives of Americans. "Should intelligence agencies be able to sweep our email, read our texts, track our phone calls, locate us by GPS? Much of the conversation swirls around the possibility that agencies like the N.S.A. or the F.B.I. will use such information not to serve national security but to carry out personal and political vendettas."

Here is the text of the letter that King received in late November, 1964. Keep in mind that as it pretends to be from a fellow African-American, it was written by white employees of the US government who may have wanted King to kill himself...

In view of your low grade, abnormal personal behavior I will not dignify your name with either a Mr. or a Reverend or a Dr. And, your last name calls to mind only the type of King such as King Henry the VIII and his countless acts of adultery and immoral conduct lower than that of a beast.

King, look into your heart. You know you are a complete fraud and a great liability to all of us Negroes. White people in this country have enough frauds of their own but I am sure they don't have one at this time that is any where near your equal. You are no clergyman and you know it. I repeat you are a colossal fraud and an evil, vicious one at that. You could not believe in God and act as you do. Clearly you don't believe in any personal moral principles.

King, like all frauds your end is approaching. You could have been our greatest leader. You, even at an early age have turned out to be not a leader but a dissolute, abnormal moral imbecile. We will now have to depend on our older leaders like Wilkins a man of character and thank God we have others like him. But you are done. Your "honorary" degrees, your Nobel Prize (what a grim farce) and other awards will not save you. King, I repeat you are done.

The American public, the church organizations that have been helping -- Protestant, Catholic and Jews will know you for what you are -- an evil, abnormal beast. So will others who have backed you. You are done.

King, there is only one thing left for you to do. You know what it is. You have just 34 days in which to do (this exact number has been selected for a specific reason, it has definite practical significant. You are done. There is but one way out for you. You better take it before your filthy, abnormal fraudulent self is bared to the nation.