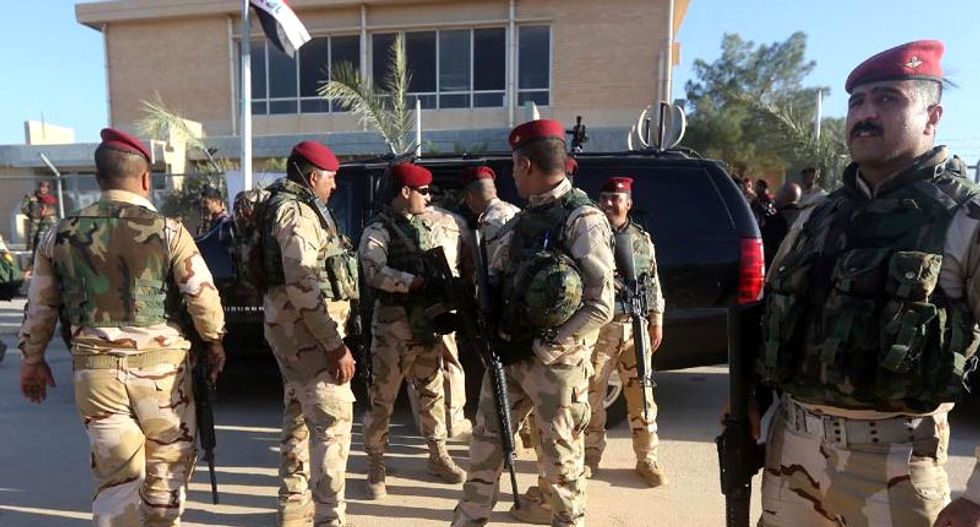 US military recommended more advisers as it has pinned its hopes on nine brigades in the Iraqi army, which are deemed good enough to be trained for an eventual counter-attack (AFP Photo/Ahmad al-Rubaye)

US military action against Islamic State jihadists in Iraq and Syria began on a small scale three months ago but has steadily expanded in size and scope, raising the stakes for Washington, experts say.

The mission has morphed from protecting religious minorities in Iraq to a vow to "destroy" the IS group in both Syria and Iraq, a dramatic shift for an American president who as a candidate was an outspoken opponent of the previous US war in Iraq.

"As commander in chief, I will not allow the United States to be dragged into another war in Iraq," President Barack Obama said on August 7, when he announced the first US air strikes against the IS group in Iraq.

But last week, Obama approved reinforcements that will bring the total military footprint to 3,100 troops in Iraq, with a new mission to shape the government army into an effective fighting force.

The justification for the initial US bombing raids in August was narrowly defined -- to protect US diplomats in northern Arbil and to prevent a massacre of besieged Yazidis on Mount Sinjar.

The United States had no intention of "being the Iraqi air force," Obama said at the time.

"But that's explicitly what the United States is now," said Micah Zenko of the Council on Foreign Relations.

After more than 800 air strikes, there is no end in sight and US officials say the fight could last years.

The step-by-step expansion of the war effort is a familiar pattern for American presidents, and Congress tends to give the commander-in-chief a green light, Zenko said.

"Every administration does this. It's not unique to this White House," he said.

The American military advisers are not in a "combat role" but some of them will be based in the frontline province of Anbar in the country's west, a bastion for the IS group.

The deployment raises the risk of potential American causalities if the IS group overruns an Iraqi air base there or if it manages to down an American helicopter with a shoulder-launched surface-to-air missile, though US officers insist those are remote scenarios.

The biggest risk of the expanding campaign is the notorious "slippery slope," with Washington increasingly pulled into the multi-sided civil war in Syria and pressure mounting to employ more military power to turn the tide, experts say.

Obama has pledged not to send ground forces into combat but some Republican lawmakers already have urged him to order in forward air controllers to direct air strikes by coalition warplanes, a proposal favored by some top brass.

The US military recommended more advisers as it has pinned its hopes on nine brigades in the Iraqi army, which are deemed good enough to be trained for an eventual counter-attack.

The strategy resembles the effort undertaken during the American occupation of 2003-2011, when advisers worked with Iraqi units and Sunni tribes to fight Al-Qaeda militants, said Robert Scales, a retired US Army major general.

But as the Iraqi forces train, the IS jihadists will have time to strengthen their hold on territory, stockpile weapons and recruit more young fighters, Scales wrote in the Washington Post.

"If nine Iraqi brigades with their US advisers can’t do it next year, the clock will keep ticking. And Obama will have two options: Accept an Islamic State 'caliphate' that occupies much of Iraq and Syria or add more US forces to the opposition," Scales wrote.

In a New York Times commentary, Bolger argued the military's experience in Iraq has been misunderstood in Washington and that the 2007 troop surge was not the success it has been portrayed as.

"The surge in Iraq did not 'win' anything. It bought time," he wrote of the reinforcements sent to salvage the war.

"But in the end, shackled to a corrupt, sectarian government in Baghdad and hobbled by our fellow Americans' unwillingness to commit to a fight lasting decades, the surge just forestalled today's stalemate," he said.

Now the United States faces the same militants it fought for eight years, and calls by hawks for larger-scale military action amounted to "insanity," said Bolger, author of "Why We Lost."

"If insanity is defined as doing the same thing over and over and expecting different results, I think we're there."