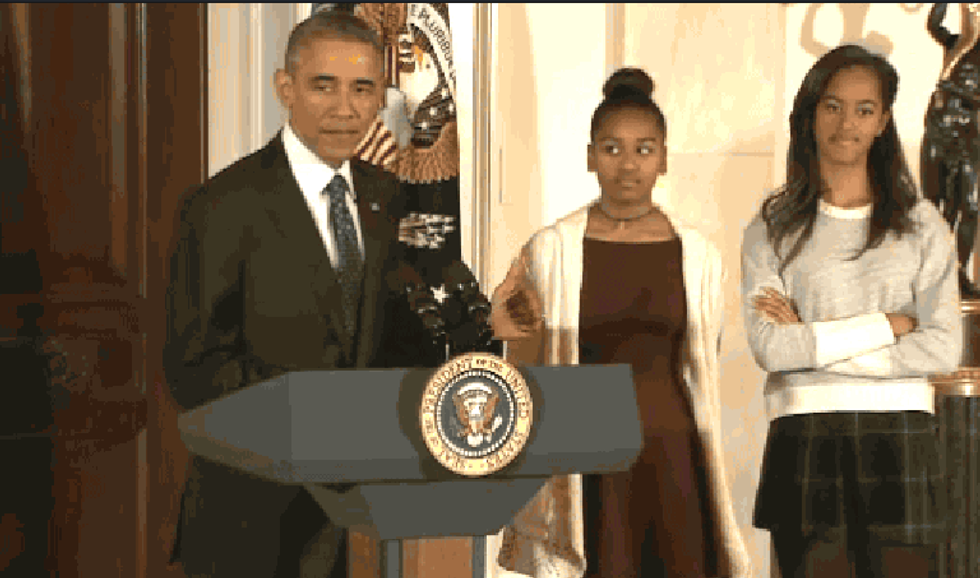 A staffer for Republican Rep. Stephen Fincher (TN) took to Facebook this week to attack Sasha and Malia Obama, President Barack Obama's daughters, for failing to show what she deemed to be sufficient respect for their father's annual pardoning of a Thanksgiving turkey.

According to Gawker, Elizabeth Lauten, former new media political director for the Republican National Committee, wrote an open letter to the two girls, attacking their facial expressions and clothing choices.

"Dear Sasha and Malia," wrote Lauten, "I get that you're both in those awful teen years, but you're part of the First Family, try showing a little class. At least respect the part that you play. Then again your mother and father don't respect their positions very much, or the nation for that matter, so I'm guessing you're coming up a little short in the 'good role model' department."

She continued, "Nevertheless, stretch yourself, rise to the occasion. Act like being in the White House matters to you. Dress like you deserve respect, not a spot at a bar. And certainly don't make faces during televised, public events."

For the pardoning ceremony, elder daughter Malia wore a long-sleeved sweater, a plaid schoolgirl skirt and opaque tights. Sasha Obama wore a mini-dress that hit her at mid-thigh with a long-sleeved cardigan sweater.

Gawker's Hudson Hondo wrote, "For most people, Sasha and Malia Obama's spiritless appearance at this year's White House turkey pardon was a lesson about humility, showing how even the world's most powerful man is still just 'ugh, Dad' to his teenage daughters."

Blogger Yesha Callahan at The Root published a screen shot of Lauten's post, which set off an angry backlash on social media and political blogs.

Lauten published an apology for the post on Friday, saying that after "many hours of prayer," she now regrets attacking the girls. However, she has since deleted it.

Gawker's Hongo said, "As some noted, the comments seemed particularly ironic given the numerous alcohol-related charges racked up by Bush's daughters during the last Republican presidency."