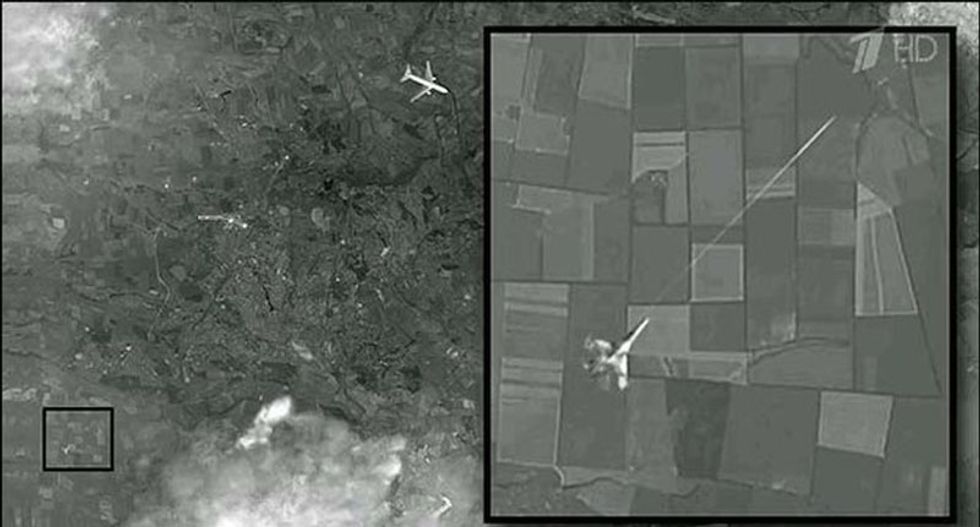 On Friday, Russia’s Channel 1 featured a photo they claimed proved a Ukrainian jet fighter shot down Malaysia Airlines flight 17 in July, only to have it disproved hours later as an obvious fake, according to Buzzfeed.

Following the debunking a spokesperson for the group that turned the picture over to Channel 1 defended the photo, saying, "It came from the Internet."

The state-run television channel presented the image, claiming it been taken moments before the passenger jet crashed in eastern Ukraine, to bolster Moscow's contention that the passenger plane was brought down by a Ukrainian Su-27 fighter jet, killing all 298 people on board.

Hours after the picture was shown, Russian and international bloggers called the image a fake, noting the logo for Malaysia Airlines was misplaced on the plane and the clouds in the picture were identical to those found in a Google Earth image from 2012. Bloggers later noted that fighter jet in the picture appeared to be a Russian MiG-29 and not an Su-27, and the the picture of the airliner looked like it had been lifted from Google Images, when requesting 'Boeing view from above.'

A Russian engineer investigating the crash said on the program that he had received what he called a "sensational picture"  from George Bilt, an American MIT graduate with over 26 years experience in aviation.

In an interview with Buzzfeed, Bilt admitted that he had forwarded the link to the picture which he discovered in an online forum because he found it interesting.

“I had no knowledge or means of proving and researching if this was an authentic satellite photo or not (it was clearly available online since mid October – not really such a new discovery too),” Bilt said.

Bilt said he was surprised and unhappy to see his name associated with the picture in what he thought was a private email to Ivan Andreyevsky of the Russian Union of Engineers.

"I am quite unhappy that my bona fide informal attempt possibly became a source of yet another battle in a media war,” he said. “This was definitely not my intention. I am also not looking for a cheap fame. This tragedy is simply too awful to gain from it."

Following the debunking, reporters from the Moskovsky Komsomolets tabloid asked  Russian Union of Engineers  head, Vladimir Saulyanov, if his group had checked to see if the photo was authentic.

“How could we check it?” Saulyanov said. “It came to us from the internet.”

Russians on Twitter mocked the discovery, with Russian journalist Sergei Parkhomenko writing (roughly translated) "What a bullshit," while another posted an alternative photo (seen below)  featuring a spaceship emblazoned with a Nazi swastika.

Bilt was more to the point.

“Those folks are either desperate or totally unprofessional,” he said.