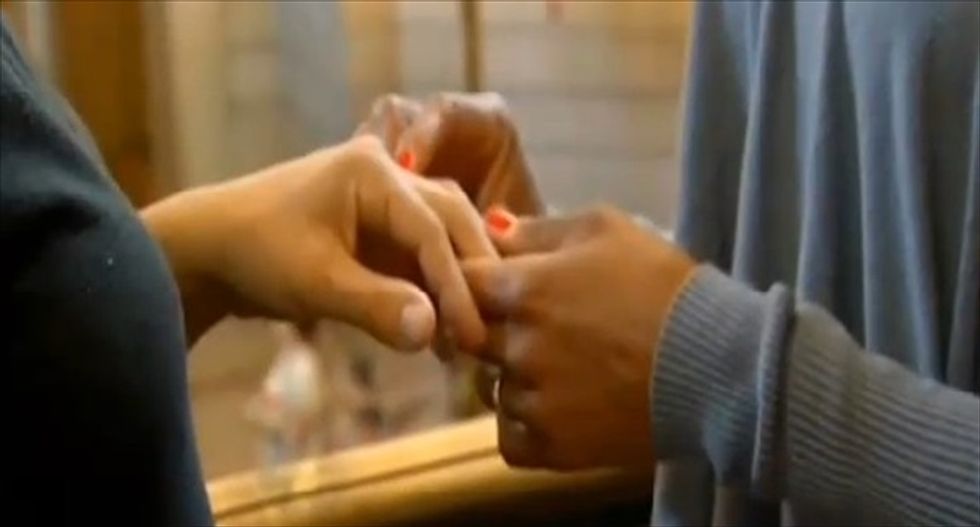 A lesbian couple in Nebraska seeking recognition of their marriage status before one of them dies is among seven same-sex couples challenging the state's ban on marriage equality, the Omaha Herald-World reported on Monday.

One of the plaintiffs, Sally Waters, was diagnosed with terminal cancer this past June. She and her partner, Susan Waters, became domestic partners in California in 2002 and entered a legally-recognized marriage in that state six years later.

"We have said publicly before God, our family and our friends that we love each other and are committed to one another and our children," Sally Waters said. "At this moment, I want to spend time loving my children and my wife while knowing that should I die, they will be cared for."

But according to state initiative 416, neither same-sex marriages nor civil unions granted in other states are recognized in Nebraska. The law went into effect after being backed by 70 percent of state voters in November 2000.

According to the Lincoln Journal-Star, that means that Sally Waters' death certificate will list her as single. Consequently, her partner will have to pay an 18 percent inheritance tax on the home they currently share, compared to a 1 percent tax rate for married couples. Susan Waters will also be ineligible for Social Security benefits typically granted to surviving members of a couple.

"It's a fairly gloomy outcome that I've got ahead of me," Sally Waters told the Herald-World. "That made it extra clear that not having our marriage recognized in Nebraska was going to be a hardship for our family."

"It's a diverse group of Nebraskans who have come forward to stand up for their rights, and to support the freedom to marry for all Nebraskans," Conrad told KKLN-TV.

According to the Herald-World, Gov. Dave Heineman (R) said the state would fight to retain the ban, despite the difficulty of situations like those of the Waterses.

"Let me also remind everybody, marriage has always been a state’s issue," Heineman said. "We should reflect the values and beliefs of the citizens of Nebraska, which I have absolutely no doubt remains firmly committed that marriage is between a man and woman."

Nebraska is one of 17 states with a marriage equality ban in place. Other bans around the country have been found unconstitutional in the wake of the June 2013 Supreme Court ruling striking down the federal Defense of Marriage Act and California's Proposition 8.

The high court is expected to revisit the issue following a ruling by a federal appeals court earlier this month upholding bans in Kentucky, Michigan, Ohio and Tennessee.

Watch KKLN's report on the lawsuit in Nebraska, as aired on Monday, below.