SEE IT: This WWI soldier's bedroom in France has been frozen in time for 100 years 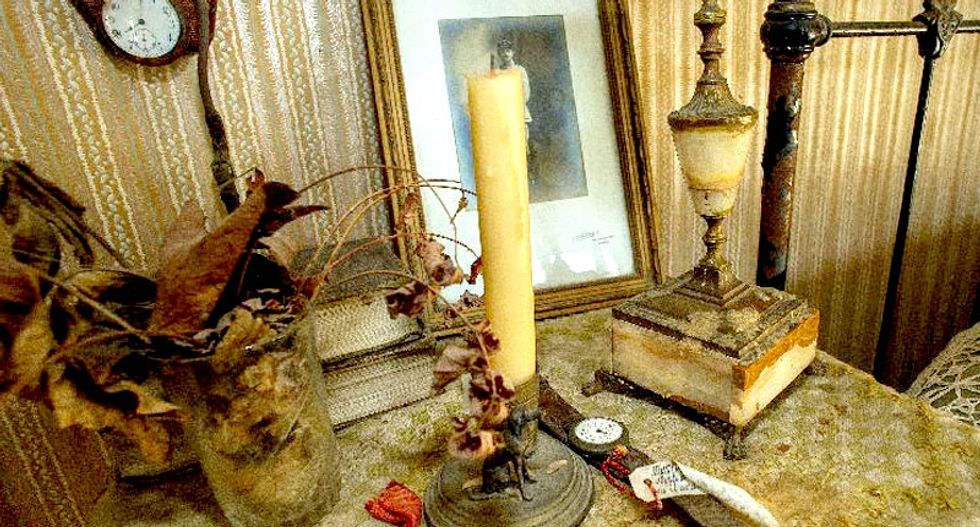 Faded flowers are seen on October 29, 2014, on a bedside table in the bedroom of French Word War I second lieutenant Hubert Rochereau, in Belabre, central France, left intact since his death on the Belgian front (AFP Photo/Guillaume Souvant)

The dust and cobwebs lie thick after nearly a century, but the memory of the French soldier who grew up in this bedroom -- and who died in Belgium in World War I -- is today as vivid as the sunlight streaming through the window.

Dragoons officer Hubert Rochereau's presence permeates the place. It emanates from photos and from the second lieutenant's various possessions -- uniforms, riding trophies, books -- frozen in time on the top floor of a large home in Belabre, a small village in central France.

The vivid vestiges of Rochereau's short life are a testament to the grief his parents felt upon learning of the death of their only son on April 26, 1918, at the age of just 21.

So deep was their bereavement, in fact, that they sought to have his memory live on when they sold the house, stipulating in the deed of sale that their beloved son's bedroom must go untouched for 500 years.

The current owner, Daniel Fabre, has observed their wishes. "It's not an act of devotion but of historic preservation," he tells AFP.

But the clause itself "has no legal basis," he notes. "You can't keep something preserved that way for 500 years under French law."

Fabre, a 72-year-old retired civil servant, took over the large house after the death a decade ago of his wife, who had inherited it from her grandfather.

He proudly shows off the small and tidy room where Rochereau was born, timeworn but remarkably intact.

Cobwebs stretch between a moth-eaten uniform jacket and a wooden desk upon which lies the bric-a-brac that Rochereau collected, including an antique pistol, military manuals, a pipe and a tin of tobacco. Dust hangs in the air.

Yet the small single bed -- covered by a lace spread, the soldier's military academy cap and his posthumous medals -- looks as if it were just made.

Above it hangs a big sepia portrait of young Rocherau in military dress, with a moustache, his gaze direct. A memory of the man who died in a British field hospital the day after being wounded when Germans overran his unit's position in Kimmelberg, a hill in West Flanders.

- Never to be open to the public -

On the walls of the bedroom are artefacts from Rochereau's interest in things military, notably swords and bayonets.

"I believe this is a German bayonet from the First World War," Fabre says, touching one blade. "The rest must date from Napoleon's time, or I don't know when."

Fabre, while respectful of the place, is not sentimental. He has not sought publicity for the bedroom, nor does he feel any attachment to the spectral occupant whose belongings he watches over.

His main concern is that his spacious residence not be overrun by tourists or World War I buffs. He has no plans to open the private memorial to the public, and even asks journalists not to provide images or details that could identify his property from the outside.

"I especially don't want to be invaded," he says. "Certainly not. After all, this is my home."

As for the future of Rochereau's bedroom after he too dies, Fabre shrugs. Maybe his daughters will keep it the way it is, most likely they will end up selling the home.

"To be brutal: I don't give a damn. What happens after me, generally speaking, I don't care.... But I think it would be a shame to get rid of all this," he says, looking around the room.

Memorials to Lieutenant Rochereau do exist elsewhere in the village: on a list engraved in a stone monument to those fallen in the war in Belabre's centre; and in the local graveyard, where the soldier's ivy-covered tomb towers over lines of headstones.

But it is the secret bedroom that has become a point of pride for the villagers.

"It's history, but it's also a form of family worship," says the mayor, Laurent Laroche.

For so long, Rochereau was an obscure name, one of the nine million soldiers who died in World War I.

But now "he reappears 100 years later... and I think that if they could see that somehow, his parents would be satisfied," Laroche says.

Watch video, uploaded to YouTube by The Telegraph, below.