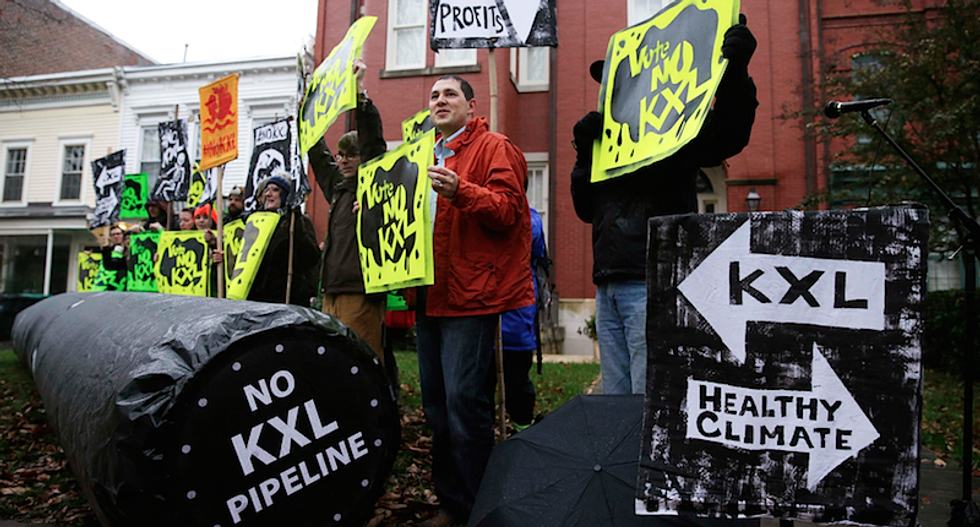 Climate advocates and representatives from the Rosebud Sioux Tribe in South Dakota protest against the Keystone XL pipeline in front of the home (center) of U.S. Senator Mary Landrieu (D-LA), chair of the Senate Energy Committee, in Washington November 17, 2014. (REUTERS/Gary Cameron)

Backers of the Keystone XL oil pipeline hope a vote in the U.S. Senate late on Tuesday will send a bill to the desk of President Barack Obama.

With the chamber apparently stuck at 59 votes in favor of Keystone XL, Senator Mary Landrieu worked hard on Monday to gather one last vote. Late in the day it seemed the Louisiana Democrat would come up just short, likely hurting her chances of winning a new six-year term in a December run-off election.

Backers of the bill in the 100-seat Senate need 60 votes to prevent a filibuster by opponents. A companion bill easily passed the House of Representatives on Friday.

The Senate is expected to vote as early as 6:15 p.m. EST on the TransCanada Corp pipeline, which would transport more than 800,000 barrels per day of oil from Alberta to Nebraska, en route to the Gulf of Mexico.

Obama criticized the project during a trip to Asia late last week, saying it would not lower fuel prices for U.S. drivers but instead would allow Canada to "pump their oil, send it through our land, down to the Gulf, where it will be sold everywhere else."

"The President ... is basically threatening a veto this time," said Ryan Bernstein, an aide to John Hoeven of North Dakota, who is sponsoring the bill with Landrieu. "He is sending a signal to Democrats."

Many environmentalists oppose Keystone, saying it would cause carbon emissions linked to climate change to spike and that the oil could be sold abroad. Construction workers and other supporters say it would create thousands of jobs.

Republicans plan to reintroduce the bill in January or February if it does not pass on Tuesday. They expect to have a 60 votes in favor next year after the party's strong showing in this month's U.S. midterm elections.

TransCanada shares closed at $56.57 in Canadian trading on Monday, up 1.4 percent.