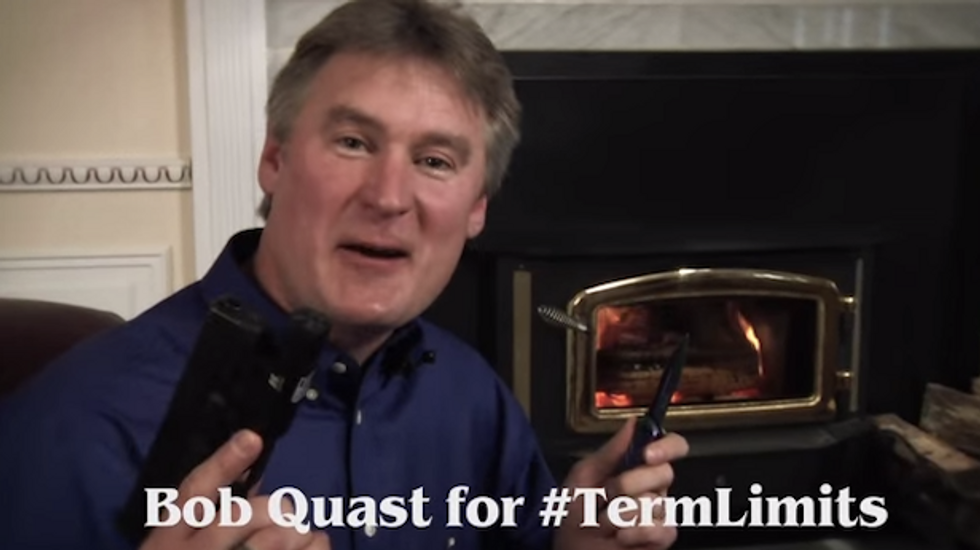 Today, my fellow Americans, we have the chance to exercise our hard-earned right to vote for some people I can't actually believe are running for office. Here's a mere sampling of some of the most batshit crazy things said and done by candidates who want your vote.

1. Bob Quast: #GotBalls? Because He'll Blow them Off! This Iowa Independent Senate candidate won't let any man's testicles get in the way of his Second Amendment rights. As Quast explained in his campaign ad, "If you are the sexual predator and sociopath who murdered my sister Lynette and you come to my front door to do harm to my girls, I'm going to use my Glock. To blow your balls off." Quast is not afraid of hashtags, either. As his Youtube page for the ad boasts, "Bob believes in #termlimits" and "would like to serve the great, no nonsense people of #Iowa as their next US Senator. #gotballs #bobq2014." The title of the video ad is "#GotBalls, Vote for Bob Quast."

2.  Joni Ernst. Got Pig Balls? Because she'll cut them off and 'Make 'em squeal." What is it about Iowa and testes destruction? Running against Quast for the Senate in Iowa, this Republican is proud of her experience cutting castrating pigs. For realz. As she brags in her own sociopathic ad, “I grew up castrating hogs on an Iowa farm so when I get to Washington, I'll know how to cut pork....  Washington is full of big spenders. Let’s make ‘em squeal.”

3.  Don Young: death threats and butf***ing. It's hard to be surprised by anything this  Alaskan Republican Congressman running for reelection does.  Most recently, his Democratic opponent Forrest Dunbar says, Young threatened, "Don’t you ever touch me. Don’t ever touch me. The last guy who touched me ended up on the ground dead.” Note that Young's spokesman didn't deny the claim. And the story is more than plausible, given Young's "interesting" history. He once condemned the NEA for funding "butf***ing," and once called Mexican-American farmworkers as “wetbacks" and once made silly faces while another congressman, paid tribute to  a Marine from New Jersey who had been killed in Afghanistan.

5. Glenn Grothman: anti-Kwanza, anti-weekend, anti-equal pay, pro-raw milk. I may not like what Grothman has to say or what he does,  but I won't deny that he is as sexy as his name. The Republican State Senator, who is now running for Congress in Wisconsin, doesn't mince his words when he defended getting rid of equal pay legislation:

You could argue that money is more important for men. I think a guy in their first job, maybe because they expect to be a breadwinner someday, may be a little more money-conscious. To attribute everything to a so-called bias in the workplace is just not true.

He also is open about his opposition to Kwanza,  a holiday invented by an "African American Marxist" who, "disliked the United States and he disliked

Christmas, which he thought of as white. He, therefore, made up a holiday that he wanted for blacks." As Grothman, some of whose best friends are "blacks," I'm sure, explains, "Of course, almost no black people today care about Kwanzaa - just white left-wingers who try to shove this down black people's throats in an effort to divide Americans."

But you know what Grothman is for? Legalizing the sale of raw milk.

6. Michael Grimm: "Sometimes I get my Italian up" and threaten to throw someone over a balcony.  Not only has Rep. Michael Grim (R-NY) been indicted for criminal activity related to his campaign, but he literally threatened the life of a reporter who asked him about the then-ongoing federal investigation.  After NY1 reporter Michael Scotto asked the Congressman some questions, Grimm replied, chivalrously: "Let me be clear to you, you ever do that to me again I'll throw you off this fucking balcony... No, no, you're not man enough, you're not man enough. I'll break you in half. Like a boy."

But guys, there's a totally reasonable explanation for all of this. As Grimm explained in a debate: "Sometimes I get my Italian up... I'm human...it's a stressful job being in Congress." All true things. All true things.

7. Jody Hice: outing the gay manifesto. This radio show host, political activist, and Southern Baptist reverend is now running for Congress in Georgia. Hice exposed the gay agenda he discovered when he came across a satirical essay he mistook for a true confession. In his book It's Now or Never: A Call to Reclaim America, Hice actually cites, "These shocking words by Michael Swift," which "have been considered part of the 'gay manifesto' by many, and reveal the radical agenda that is currently threatening our nation:"

We shall sodomize your sons, emblems of your feeble masculinity, of your shallow dreams and vulgar lies. We shall seduce them in your schools, in your dormitories, in your gymnasiums, in your locker rooms, in your sports arenas, in your seminaries, in your youth groups, in your movie theater bathrooms, in your army bunkhouses, in your truck stops, in your all male clubs, in your houses of Congress, wherever men are with men together. Your sons shall become our minions and do our bidding. They will be recast in our image. They will come to crave and adore us.

And he also believes Muslims don't deserve First Amendment protection. And Hice thinks it's A. OK for women to enter politics: ''If the woman's within the authority of her husband, I don't see a problem."