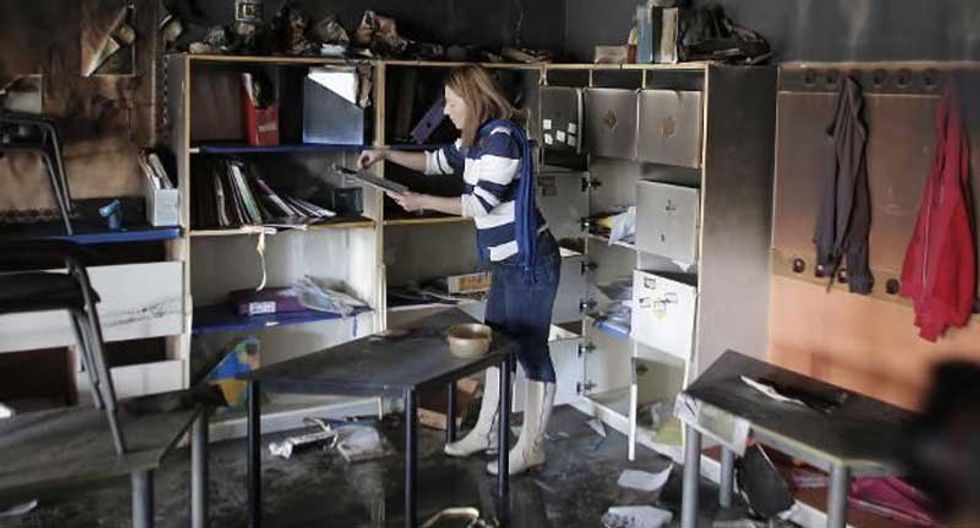 A woman inspects the damage following an arson attack that targeted classrooms at a Jewish-Arab school near the southern Jerusalem neighborhood of Beit Safafa, on November 30, 2014 (AFP)

An arson attack targeting first-grade classrooms at a Jewish-Arab school sparked a wave of condemnation Sunday, as months of racial tensions in Jerusalem showed little sign of abating.

The attack, apparently by Jewish extremists, occurred Saturday evening at the Hand-in-Hand bilingual school, a rare symbol of coexistence in a city fraught by growing friction between Jews and Palestinians from annexed east Jerusalem.

Scrawled on the walls were slogans in Hebrew reading "Death to Arabs" and "There's no coexistence with cancer," police said.

Israeli Prime Minister Benjamin Netanyahu condemned the attack and pledged to act "forcefully" to return "the rule of law" across all parts of the city.

And Justice Minister Tzipi Livni pledged a "zero tolerance" approach to anyone behind such acts.

"I will work determinedly against everyone who acts against the law and expresses through violence the racist demon which has emerged in Israeli society -- whether it is through hateful graffiti, arson or other forms of violence," she told reporters at the school.

Headmistress Nadia Knane said one of the first-grade classrooms had been badly damaged by the fire, and that the attackers had tried to set alight another classroom.

The assailants had piled up textbooks and set them on fire.

"After I saw what was written, I realised it was not just a fire. They wrote 'Death to Arabs' and 'Kahana was right' -- words which have a lot of meaning," she told army radio.

Meir Kahana was a virulently anti-Arab rabbi whose Kach party was banned over incitement to racial hatred but whose ideology still inspires loyalty among Jewish extremists.

"The school had been targeted several times in recent months but every other time was outside the school. This is the first time it was inside," the headmistress said.

Inside the classroom, blackened and charred books were piled on the floor and the walls and ceiling were badly burned. On the balcony outside were the words "Death to Arabs".

On Sunday, scores of people gathered in support of the school and its pupils and teachers.

They carried placards in Hebrew, Arabic and English reading: "Spread the light -- together against terror" and "Light in a place of terrorism".

Another giant spray-painted banner in Hebrew and Arabic read: "We will continue together, without fear."

Speaking to AFP, Hatem Matar, head of the parents' committee, denounced it as "a barbaric attack".

"We learnt to respect and understand each other without making distinctions... to see each other as human beings," said his daughter and former student Imane, who is now at university.

Shuli Dichter, chief executive of the Hand-in Hand foundation, which manages five of the country's seven bi-lingual schools, said it was time to change the public atmosphere in order to prevent such attacks.

"In the past months, we've witnessed... a wave of racism (that) is dangerous, even physically dangerous," he told army radio.

Jerusalem's deputy mayor Rachel Azaria denounced the attack as "a horrific crime perpetrated by people who want to destroy any place that creates real cooperation between Jews and Arabs".

"We will not let them do this."

Education Minister Shai Piron said it was a "violent and despicable incident" and "a serious affront to the fabric of Jewish-Arab relations".

The school is located on the Green Line separating west Jerusalem from the annexed eastern sector, and has 624 pupils.

In the past few years, it has been targeted by a string of so-called "price tag" hate crimes by suspected Jewish extremists, most recently during Israel's 50-day war against Hamas militants in July and August.

Such attacks tend to involve anti-Arab vandalism, which sometimes manifests as arson, and offensive Hebrew graffiti.

On Sunday, two Israelis were indicted for a 2013 attack in which Palestinian cars were torched in the West Bank, the justice ministry said.